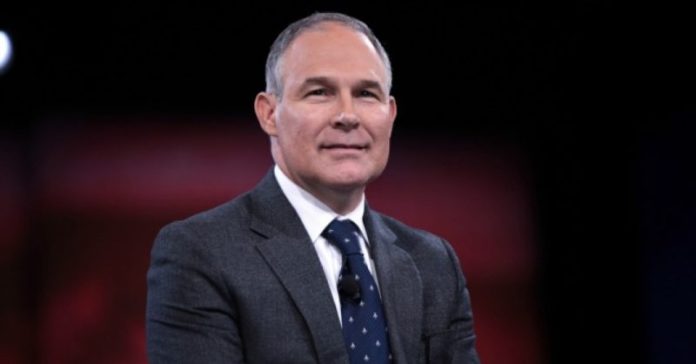 Passions are exploding over Oklahoma’s Attorney General, Scott Pruitt, becoming the Secretary of the Environmental Protection Agency (EPA). Particularly, the Sierra Club is furious and has started an Alinsky-style assault of vilifying the nominee.

Having Scott Pruitt in charge of the U.S. Environmental Protection Agency is like putting an arsonist in charge of fighting fires. He is a climate science denier who, as Attorney General for the state of Oklahoma, regularly conspired with the fossil fuel industry to attack EPA protections.

In response, Leslie Rutledge, Attorney General of Arkansas, claims the EPA has become lawless by making rules and regulations beyond the authority given to them by Congress. Rutledge writes:

"Of the numerous regulations that the EPA published during his tenure as Attorney General of Oklahoma, he has only challenged the handful of regulations that he believed were far outside the legal parameters of the agency. It is just this type of balanced approach that Americans need steering the wheel at the EPA."

“Outside the legal parameters” is of paramount importance to our Republic and how We the People are governed. Our Constitution is the legal document that defines powers used to govern our country. Article I of the Constitution vests the power to make laws solely to Congress. Since our founding, agencies under the direction of the President have existed to carry out the laws made by Congress. Constitutionally, agencies cannot make rules and regulation beyond the limits established by Congress.

Harmfully, the Progressive Era has increased the number and powers of federal agencies. Worse and deplorable yet, Congresses have often abdicated their sole power to make the laws by giving many agencies powers to implement, police, and adjudicate themselves. Most often governing by bureaucracy occurs before there is any review by the courts. Hence, for many years special interest groups, e.g. Sierra Club and the fossil fuel industry, have learned that lobbying and conspiring with agencies are productive in achieving their goals and needs, which is often to the detriment of We the People.

Thus, with Secretary of EPA Pruitt, the Sierra Club fears curtailment of their influence and status at the EPA. Pruitt, Rutledge, and other Attorneys General argue the EPA is imposing rules that violate its legal authority and sovereignty of their respective states, damaging the freedom and prosperity of the citizens. Rutledge explains, "The EPA has earned its reputation as the most lawless executive agency. Over the last eight years, it has again and again painted far outside the lines of its legal authority under statutes passed by Congress."

Hence, the Senate’s consent of Scott Pruitt opens the enormous issue on how America is governed. Our Constitution is far more important than the environmental concerns of the Sierra Club or the special interests of the fossil fuel industry.

Laurence Tribe of Harvard Law, first to teach environmental law, states how critical the separation of powers are to our Republic. Addressing the Energy and Commerce Subcommittee on Energy and Power, on the EPA’s Clean Power Plan, he stated:

“EPA is attempting an unconstitutional trifecta: usurping the prerogatives of the States, Congress, and the Federal Courts — all at once. Much is up for grabs in this complex area. But burning the Constitution of the United States –— about which I care deeply — cannot be part of our national energy policy.…”

James Madison, the intellectual power creating our Constitution, argued for limited government with power checking and balancing power. The check and balances are between Congress, the executive and the courts at the federal level. Also, there are checks and balances between the sovereign states and the federal government.

To restore our Constitution, the separation of powers, and our liberties, Scott Pruitt should become our next Secretary of the EPA.