Sen. Hatch throws in the towel on full ObamaCare repeal 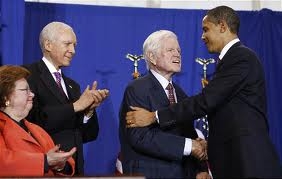 Last week, Sen. Orrin Hatch (R-UT) and two of his Senate GOP colleagues introduced a bill (S.1880) that could do severe damage to the grassroots effort to repeal Patient Protection and Affordable Care Act (PPACA), more commonly known as ObamaCare.

The bill would repeal one of the many new taxes levied in that controversial law -- specifically, the tax on health insurance companies.

The health insurer tax is a bad one, to be sure. But the President's health care law is full of bad taxes. Why repeal just that one? Why just the tax on health insurance companies?

Pitched by its authors as a "jobs bill" and titled "A bill to repeal the health care law's job-killing health insurance tax," S.1880 would, all things being equal, slightly reduce health insurance premiums and probably create a few thousand jobs. Which would be good things, to be sure.

But in doing so, it would also do two very bad things:

1. It would set back the ObamaCare repeal effort -- perhaps fatally.

When it comes to the Democrats' government takeover of health care, to paraphrase General Ulysses S. Grant: "No terms except unconditional and immediate repeal can be accepted."

The first rule of effective legislating is "Never make a bad bill better." Selectively repealing a single provision of this 2,801-page law, in order to benefit a single special interest, makes a "bad bill" a whole lot better for that interest.

And it weakens the larger repeal effort. That interest -- the health insurance lobby -- is also a very powerful one in this context. They support ObamaCare, but they also want off the hook on that health insurance tax. Should S.1880 become law, the health insurers would have no reason left to want to help us repeal ObamaCare in toto. They will have made out like bandits.

The irony here is that there is absolutely no need to give up on full repeal, public support for which has never been higher. Indeed, in the Tea Party Debt Commission's online survey of the public's budget-cutting priorities, "Repeal ObamaCare" comes in at No. 1 as the most supported budget reform idea, with a staggering 93 percent "preferable" rating.

2. It would reward the K Street collaborators who brought us ObamaCare.

What makes S.1880 particularly disgusting is that it would reward the very same health insurance lobby that made ObamaCare possible in the first place. In 2008, the CEOs of the health insurance companies, through their Washington trade group, America's Health Insurance Plans (AHIP), made a calculated decision to offer a massive concession to the Left: We will drop our traditional opposition to your desire for a government takeover of health care, if you agree to force all Americans to buy our product. Obama and congressional Democrats happily agreed. The rest is history.

Without AHIP, ObamaCare would never have happened.

S.1880 is more than a blunder, it's a stab in the back to the millions of citizens who worked so hard to stop the government takeover of health care and are now working so hard to repeal it.

ADDENDUM: Sen. Hatch, who singlehandedly pulled HillaryCare off the ash heap of history in 1996 by crossing the aisle to embrace and champion Sen. Ted Kennedy's "Kids First" government health care bill (later known as SCHIP) is next in line to become chairman of the powerful Senate Finance Committee in 2013 -- the committee that oversees all health care and tax legislation -- should Republicans retake the Senate, and should he be reelected, in 2012.

This is why states have to NULLIFY all undelegated powers and attempts by the
federal government; The federal government is limited to only those few things
delegated to it.<br>
<br>
Virginia Ratifying Convention 6-16-1788: Mr. PENDLETON. Mr. Chairman, this
clause does "NOT" give Congress power to impede the operation of "ANY PART"
of the Constitution, <br>
<br>
(N)or to make &gt;&gt;&gt;"ANY"&nbsp; "REGULATION" that (even) "MAY" affect
the interests of the citizens of the Union &gt;&gt;&gt;"AT LARGE". <br>
<br>
But it gives them power over the "local" "police of THE &gt;&gt;&gt;PLACE"
(APP: THE "PLACE" i.e. the 10 miles square of Washington DC), so as to be
secured from any interruption in their proceedings. Notwithstanding the violent
attack&nbsp; upon it, I believe, sir, this is the &gt;&gt;&gt;"fair&nbsp;
construction of the clause". It gives&nbsp; them power of exclusive legislation
in any case within &gt;&gt;&gt;THAT district. &nbsp;<br>
<br>
See day Virginia Convention that defines the Constitutional limitations;
in full at: http://www.pacificwestcom.com/americanpatriotpartynewsletter<br>
<br>

Orrin will not last much longer, Mike Lee was a Tea Party candidate and defeated Bennett in the GOP Primary in Utah, same thing will happen to Hatch the next time he is up for election!