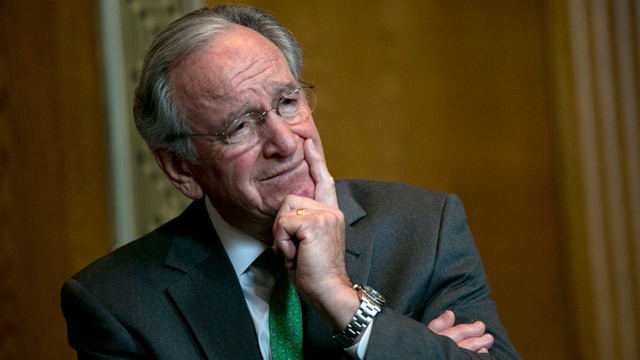 Just days after Sen. Chuck Schumer (D-NY) told a crowd at the National Press Club that the priority placed on ramming ObamaCare through Congress in 2009 was a mistake, one of his colleagues, Sen. Tom Harkin (D-IA), one of the co-authors of the law, conceded that it has only further complicated healthcare in the United States.

In an interview with The Hill, Harkin, who didn't seek reelection this year, suggested that Congress shouldn't have passed ObamaCare. "We had the power to do it in a way that would have simplified healthcare, made it more efficient and made it less costly and we didn’t do it," said Harkin, who's chaired the Senate Health, Education, Labor and Pension Committee since 2009. "So I look back and say we should have either done it the correct way or not done anything at all."

Harkin blames the concerns of politically vulnerable Democrats -- including his then-colleagues, Sens. Blanche Lincoln (D-AR) and Ben Nelson (D-NE) -- for not ramming through some form of a single-payer program, such as the public option. "What we did," the Iowa Democrat said, "is we muddled through and we got a system that is complex, convoluted, needs probably some corrections."

"So as a result we’ve got this complicated thing out there called the Affordable Care Act," he added.

Harkin is on the money with the suggestion that Congress shouldn't have done anything at all but for the wrong reasons. The public option would've put the federal government in direct competition with private health insurance companies. It would've been like letting the fox guard the hen house, though that was the idea.

What's more, single-payer health insurance programs already in existence are inefficient and wasteful. Medicare's administrative costs, for example, are greater than those in the private sector. And as more enrollees enter into the program, absent meaningful and long-overdue reforms, the federal government will have to rely on rationing to control rising costs.

Though he's is wrong about single-payer, Harkin is right about ObamaCare. This poorly designed, ill-advised law has indeed made health insurance more complicated, complex, and convoluted, which is a result of more government intervention in the market. For all the complaints about the costs of coverage and premium increases during the debate over ObamaCare, the law has made health insurance even more expensive. In terms of implementation, the rollout of HealthCare.gov was an unmitigated disaster, millions of health plans that people had and liked were canceled, and the administration has constantly moved the goal posts to define "success."

If ObamaCare has taught Americans anything, it's that the federal government involvement in only makes things worse, which is why it's so important that a Republican-controlled Congress begin to repeal it, piece by piece, if they must.