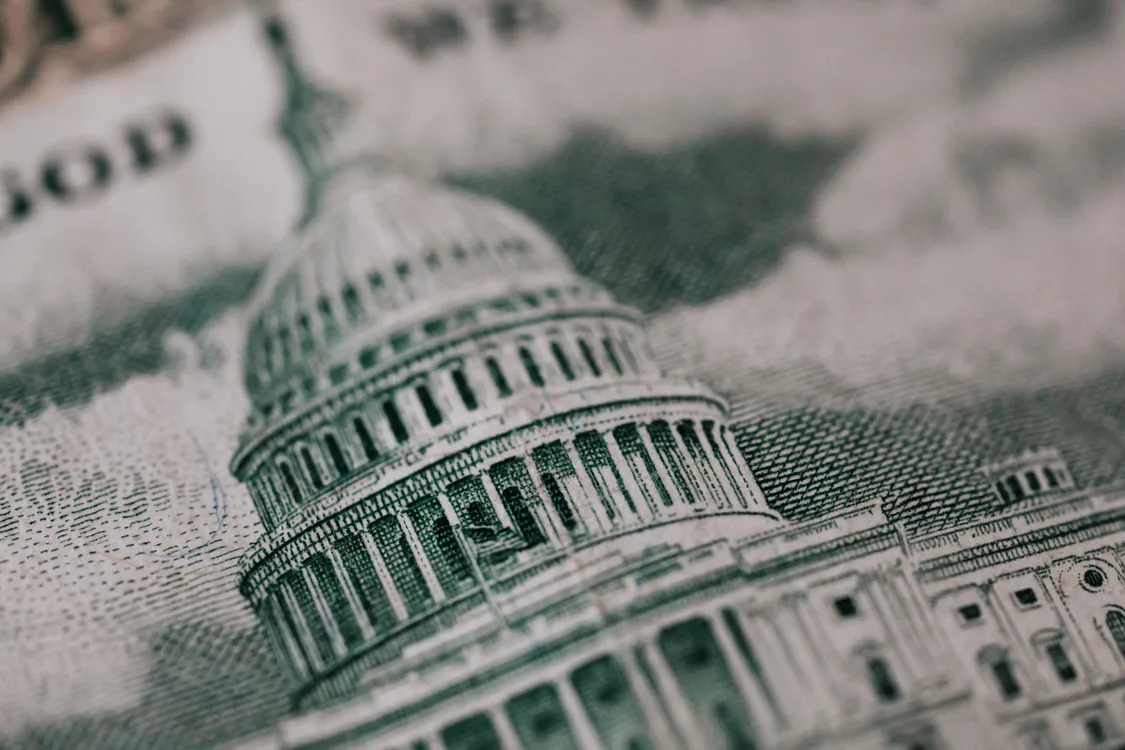 Let’s go back for a moment and put this in context. Between March 6 and April 24, Congress passed four bills with a total cost of $2.4 trillion. This isn’t the limit of the fiscal impact of those four bills. The Federal Reserve, for example, has taken steps to provide loans to businesses and state and local governments. 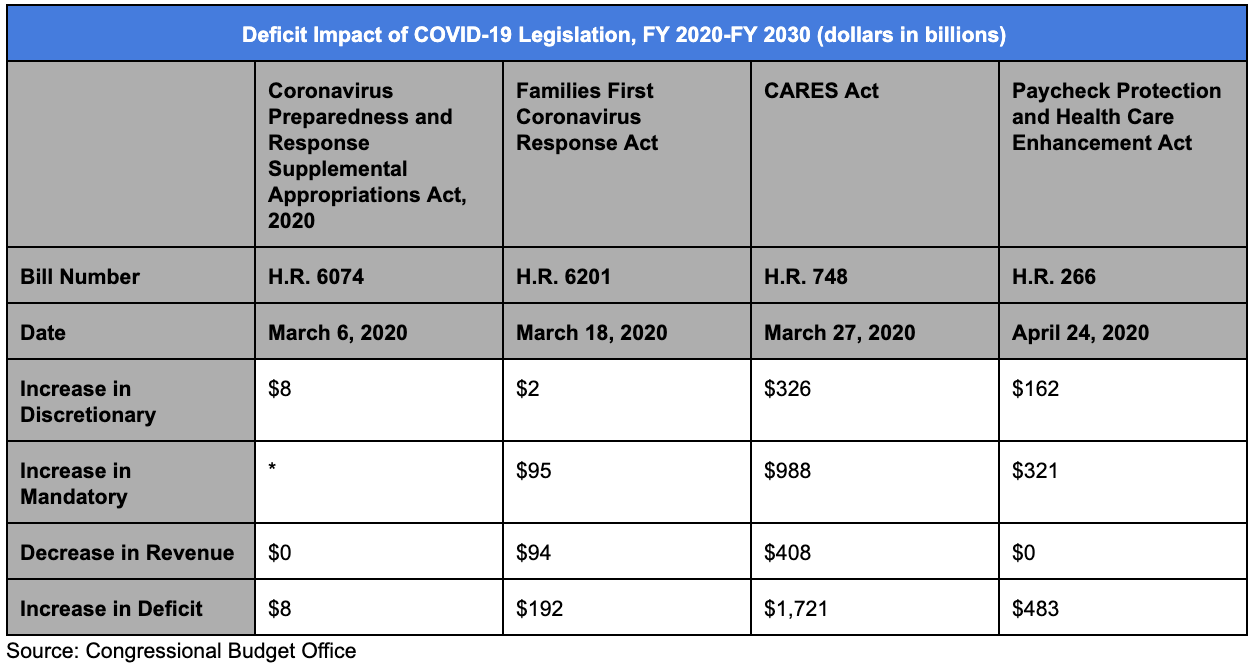 According to the Bureau of the Fiscal Service, the budget deficit for FY 2020 is $2.744 trillion through the first three quarters of the fiscal year. This is not only because of increased federal spending but also because of the effects of the recession. With the delayed taxing filing date, the federal government should see an increase in revenues in July, but a surplus in the month of July seems unlikely.

The federal government has spent more than $5 trillion over the course of the fiscal year. June saw the federal government spend roughly 20 percent of all outlays for the year. The budget deficit for May and June exceeded the budget deficit for all of FY 2019. At the beginning of the year, the Congressional Budget Office projected that federal spending for FY 2020 would be $4.647 trillion. 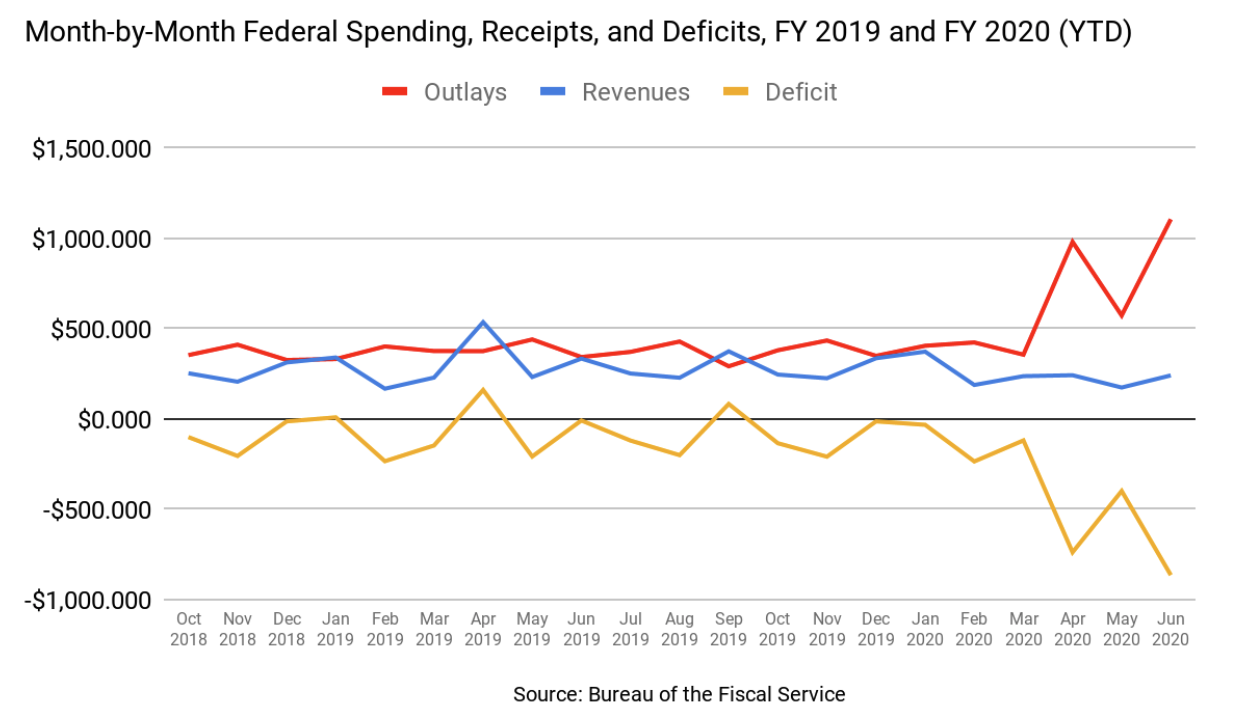 The HEALS Act would add at least another $1 trillion to federal spending for FY 2020, further increasing the budget deficit. It’s incredibly unlikely that Senate Majority Leader Mitch McConnell (R-Ky.) has the votes to move the bill through the chamber, considering how far apart Democrats and Republicans are in terms of their priorities. Additionally, several Republicans will vote against the bill, and rightly so, because of concerns about the budget deficit.

To be sure, there are positive elements of the HEALS Act. The Safeguarding America’s Frontline Employees To Offer Work Opportunities Required to Kickstart the economy (SAFE TO WORK) Act creates a liability shield for businesses, schools, colleges and universities, healthcare workers and medical providers, and other entities. The bill creates a federal cause of action for COVID-19 claims that may arise between December 1, 2019 and October 1, 2024 or the termination of the COVID-19 emergency declaration and preempts state law. The preemption doesn’t restrict more protective state laws that already exist or may be enacted.

A defendant in a liability case would qualify for safe harbor if he or she made a reasonable effort to comply with the required regulations related to COVID-19 or public health guidance. The plaintiff in a liability case would need to need to show, by clear and convincing evidence, that the defendant was grossly negligent or engaged in willful misconduct on each element of the claim. There’s another federal cause of action created for medical liability claims for COVID-19. The same approach is taken in terms of preemption, the time frame for covered claims, and evidentiary standard, and the need to show gross negligence or willful misconduct.

The SAFE TO WORK Act takes other important steps related to federal labor and employment laws and compliance with required regulations related to COVID-19 or public health guidance and provides a liability shield for personal protective equipment (PPE) and hand sanitizer.

The HEALS Act also includes the text of the Time to Rescue United States’ Trusts (TRUST) Act. It’s no secret that federal entitlement programs like Medicare Part A and the Old-Age and Survivors and Disability Insurance (OASDI) trust fund are unsustainable and will be forced to cut benefits. Medicare Part A is projected to be insolvent in 2024 while OASDI will be insolvent in 2031. These programs and others are driving federal budget deficits, which, as already mentioned, are radically out of control because of the congressional response to COVID-19.

The TRUST Act would create “rescue committees” for the various federal trust funds that would be required to produce recommendations in legislative text to bring the trust funds back to solvency. Two members of each party must report legislation. The bill creates an expedited process for floor consideration, but the 60-vote threshold for cloture on legislation is maintained.

As we’ve mentioned in previous posts, the $600 per week enhanced unemployment insurance benefit provided by Congress as a subsidy to state unemployment benefits has created a disincentive to work. As the American Action Forum recently noted, 63 percent of workers earn more on unemployment than at their previous job. According to the Foundation for Government Accountability, one in five workers currently on unemployment are earning double their prior wages. Some Republicans wanted the enhanced benefits to end entirely, but a lower payment is the direction in which they are going. That’s an improvement, but not a win.

The enhanced unemployment insurance benefit has been substantially reduced in the HEALS Act to $200 per week through September. Beginning in October, unemployment benefits will be paid based on a formula that factors in state unemployment benefits to pay 70 percent of lost wages. States may have an alternative formula, but that formula must be approved by the Department of Labor. States may also seek a waiver to pay a fixed dollar amount for two months.

The rest of the HEALS Act is pretty terrible from a budgetary perspective. There will be another round of direct payments to Americans, along the lines of the previous round. One key difference is that an additional $500 is available for every dependent, not only every dependent child. The direct payments are thought to be stimulative, but history says that they don’t boost consumption. The HEALS Act would appropriate another $306.066 billion, but it’s important to note that the budgetary impact isn’t limited to these appropriations. The direct payments and tax credits, as well as other provisions, come at a cost.

There’s a lot more to cover in the HEALS Act. Whether the bill will be brought to the Senate floor for a vote isn’t clear right now. Republicans largely negotiated with themselves to produce a bill that completely misses the mark. The HEALS Act spends more money that we don’t have at a time when Congress has seen budget deficit levels not reached since the end of World War II and doesn’t include priorities that were sought by conservatives and libertarians, including the Pandemic Healthcare Access Act (H.R. 6338 and S. 3546), a payroll tax holiday, and school choice tax credits. FreedomWorks cannot support the HEALS Act and would key vote NO on the bill as written for the purposes of our 2020 Congressional Scorecard.