HOW THE GLOBAL WARMING CONSPIRACY THREATENS YOUR FUTURE
by U.S. Senator Jim Inhofe

Senator Jim Inhofe has been a leading voice in the United States Senate since 1994, fighting for limited government and fiscal responsibility. Senator Inhofe has brought his efforts right to the doorsteps of the EPA and their hoax; the Global Warming conspiracy. In his book, Senator Inhofe reveals the reason behind those perpetuating the hoax of Global Warming, who is benefitting from these lies and the cost of the regulations on the American tax payer.

Come meet Senator Inhofe and receive a signed copy of "The Greatest Hoax" at the Full Circle Bookstore in Oklahoma City, Oklahoma on Friday, March 16th at 4 PM. This book will be a leading voice of reason against the tax increasing regulation of the EPA and a wrecking ball to the hoax known as Global Warming.

RSVP to the event here: http://connect.freedomworks.org/node/232813 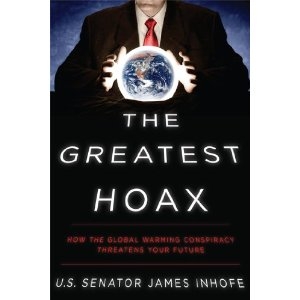 Some one needs to tell the scientific community that global warming is a hoax. The real greatest hoax is religions and Christianity makes global warming impossible so they say. But don't let sky fairy tales interfere with anyone's thinking.