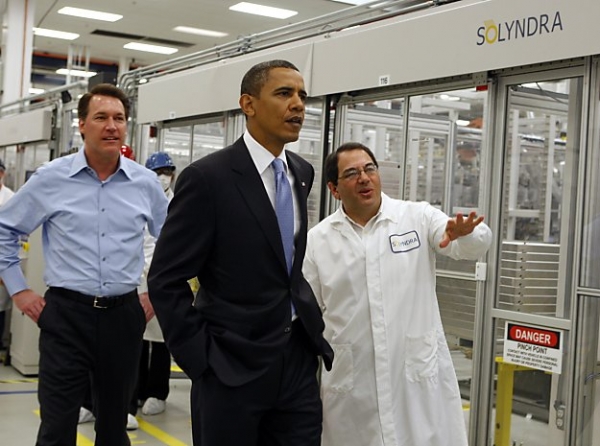 “The true engine of economic growth will always be companies like Solyndra.” Americans can only hope that Obama’s vision for economic growth is not a green energy company filing for bankruptcy and defaulting on federal loans. The Solar energy company, based in California, will be terminating 1,100 green jobs and leaving behind $535 million of failed stimulus on the American taxpayers’ receipt. House Republicans and government auditors are now intensifying investigations on the government hand out to Solyndra. Some suspect that Obama administration political patronage could be behind the irresponsible loan as the solar energy company is backed by leading Democratic fundraiser George Kaiser.

There are a significant number of red flags in the approval of Solyndra for the taxpayer assured loan. Frank Rusco, of The Government Accountability Office (GAO), states that the Department of Energy agreed to back 5 companies with loans without a risk assessment for failure. The GAO reports that Solyndra was 1 of the 5 not assessed. The GAO also discovered that the Department of Energy had rushed to complete Solyndra’s loan less than 60 days after Energy Secretary Chu was sworn into office. House Republicans have uncovered emails between the White House and the Office of Management and Budget (OMB) showing concerns of rushed loan approvals and that a loan deal was not ready. Rep. Cliff Stearns (R-Fla.), chairman of the House Energy subcommittee on oversight and investigations, strikes at the Obama banner of transparency as the White House fought investigation relating to Solyndra’s credit approval.

Even after the approval of the federal loan, concerns continued with Solyndra. During the refinancing process in March 2010, the independent auditor PricewaterhouseCoopers raised substantial doubt about Solyndra’s ability to remain in business. The Department of Energy also reported the company’s decreasing revenues. The energy department sent their inspector team to monitor Solyndra and the FBI raided the company headquarters, interviewed company executives and according to Rep. Stearns, suspects criminality. Solar industry analyst, Peter Lynch, explains that it is little surprise that Solyndra is bankrupt as they started out with an imbalanced financial model in which they could not be competitive in the marketplace.

Solyndra followed suit after the recent failures of Evergreen Solar Inc. and SpectraWatt. Ken Zweibel, director of the Solar Institute at George Washington University, confirms that the failures of these American solar companies are signals that the entire solar industry is in crisis. The inconvenient truth for taxpayers is that Solyndra is only 1 of 40 government backed businesses totaling more than $38 billion in taxpayer funding. The Obama administration’s taxpayer funded green energy agenda is struggling to create jobs while putting taxpayer money in jeopardy. The administration endorsement of green energy and financial backing is discriminatory to competing energy corporations. Government needs to let Americans choose what energy to use and develop, not force fiscal liabilities upon taxpayers.

The competition from China triggers this financial difficulties of the solar companies. Hopefully the government will be able to find a way to help these companies to remain competitive.