These next 2 weeks may be our last chance in a generation to get Washington spending under control. 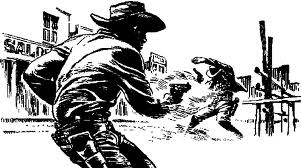 The Great Debt Ceiling Debate of 2011 is nearing its exciting conclusion.

Few Washington showdowns have been this high-stakes.

House Speaker John Boehner (R-Ohio) finds himself in the position of the western lawman who has scrambled behind a barrel to reload his six-shooter after being abandoned by his cowardly deputy (Sen. GOP Leader Mitch McConnell, R-Kentucky).

Surrounded and outnumbered, US Marshal Boehner discovers he is out of bullets.

Meanwhile, a well-armed President Obama and his gang of congressional big spenders are moving in for the kill.

What are Boehner's options?

Well, we conveniently have a very nice summary of them, in this excerpt from a freshly intercepted email by a Senate Democratic aide:

While no one can predict how this drama will end, one thing seems apparent: the President has just about checkmated the Republicans.

At this point, the GOP seems to have only four possible moves:

(1) force a default, which both Mitch McConnell and the Wall Street Journal editorial page are openly warning would be a political disaster for Republicans that would ensure Obama's reelection;

(2) accept revenues [i.e., higher taxes] in a final deal, as even [conservative TV commentator] Bill O'Reilly is now saying they should do;

(4) settle for a version of McConnell's ‘punt’ plan, which, after all this, would not mandate any spending cuts whatsoever.

Needless to say, none of these are winning scenarios for Republicans.

Correct. But wait. All hope is not lost. The writer overlooks a 5th option.

The House could pass the Cut Cap Balance Act next week and turn the tables on Rancher Obama and his chief tax-and-spend henchman, Senate Majority Leader Harry Reid (D-Nevada).

The Cut Cap Balance (CCB) Act (bill number S.1340) was introduced this week by Sen. Mike Lee (R-Utah) and has 30 other GOP senators supporting it. It would do 3 things:

In short: No BBA, no debt hike!

(And not just any BBA, but one that caps total federal outlays at no more than 18 percent of the economy and requires a 2/3 supermajority to raise taxes or add to the debt.)

These 3 changes would create the structural change we need to finally get Washington spending under control.

This would be WELL worth securing in exchange for "one last debt hike."

House passage of this legislation sometime in the next week or so would put the big spenders in a bind. They would have to choose between the following: (a) Cut federal spending immediately by 40 percent, in the event we hit the debt ceiling without a deal, OR (b)  cut spending later, under a strong BBA.

This is Marshal Boehner's one last hope.

With a little hoopin' and hollerin' from concerned citizens like you and me, he can distract the bad guys long enough to put his last bullet -- CCB -- into his gun and reappear in the street for the final showdown.

Are you ready to help?

On the count of 3, start hollerin'.

[Update: A day after we launched our call-in campaign, Sen. McConnell decided to cosponsor the CCB Act and Speaker Boehner scheduled the CCB Act for a House floor vote (to be held Tuesday, July 19th). Clearly, our efforts are working. Now we need to keep up the pressure on Congress to actually pass the CCB Act.]