But that's just the beginning of this twisted little story. As a fellow blogger observed, the root Department of Justice Programs site appears to be functioning just fine:

Follow closely Go to http://t.co/r4HzT66al7 When you get that page..go to URL box... and delete the word "Unavailable" Hit enter 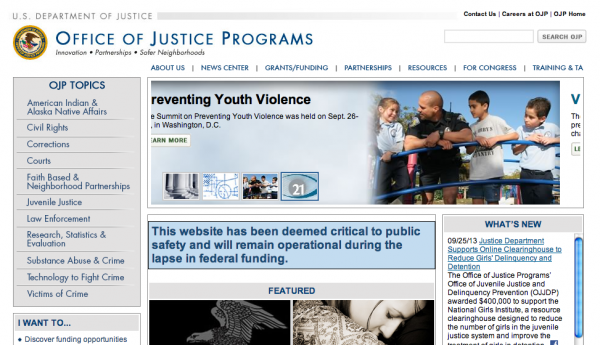 Sam Stein quoted an Administration official as saying "The alerts themselves are issued jurisdictionally - by county or state. So the alert system... is not affected by shutdown."

So why redirect the AMBER Alert site?  Why make it appear as though the notification system meant to help locate abducted children is a victim of government shutdown?

Someone went out of their way to redirect the AMBER Alert page to make it look like a casualty of government shutdown. At this time it's not clear who gave such a directive, but what is clear is that redirecting the site was intentional. Let that sink in. Someone in this administration decided to redirect the AMBER Alert site, making it difficult to access information about abducted children in order to score political points. Missing children? Meh. Let's redirect the sight to make it look like Republicans are responsible! So sick.

Not to worry though, despite the shutdown kabuki, AMBER Alerts are available here and here. Additionally, your phone will scare the daylights out of you with alerts as they come through (they're incredibly loud).

Honestly Kemberlee, what are you SO head up about!?! Those abducted lil' tykes will still be able to access advice on nutritional lunches and exercise tips from the First Lady's nutrition-rama site...still up and chuggin (sorry, endurance walking) along. Frankly Kem, it's apparent you're just up to more Republican fear mongering and slander!!!