What should Congress do on the Fiscal Cliff? 1) Lock in $1.2 trillion in ten-year sequester savings. 2) Extend ALL current tax rates for one year. 3) Reform taxes and entitlements to avert another debt downgrade. Questions?

P.S. From now on, every debt ceiling increase should be offset by an equivalent amount of spending reductions, in the same bill. No more kicking the can down the road! 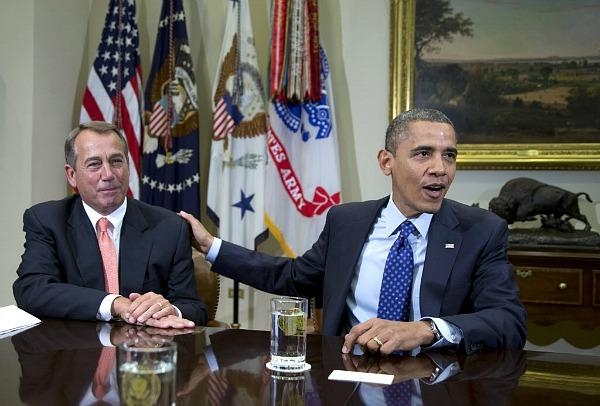 FreedomWorks to Congress: Keep Your Promise on Sequester Savings

May I suggest: “The National Federal Deficit Reduction Act of 2012. This is a temporary act of Congress to resolve a fiscal crisis ($16 trillion dollars of debt), most of which other sovereigns are the creditors, which has threatened the sovereignty and credit of the nation, and acting under the US Constitution and taxing and commerce authority granted therein, the US will impose the following tax which shall continue until such time the federal deficit shall decrease to a level lower than $5 trillion dollars: It shall be the law that that: (1) each manufacturer of personal property of any kind shall certify on the box or label of every item sold in the United States whether or not it is (x) assembled abroad or (y) assembled in the US but parts consisting more than 85% imported. Manufacturers shall operate in good faith and failure to provide labels shall impose an automatic federal tax unless and until such time a proper label is put on the product. (2) each retailer to the consumer shall collect a 5% federal tax on (x) all imported goods and (y) goods assembled in the US but parts consisting more than 85% imported. Retailers shall operate in good faith and fines assessed by the IRS or any of its agencies on retailers failing to collect such tax shall be mandated for the noncompliance by such retailers. (3) Federal tax shall be charged to the consumer, collected by the retailer, and quarterly sent to the IRS.” -- It is a thought -- Out of the Box and no old ladies lose money and the rich can keep employing and buying things to stimulate the economy and - hey maybe manufacturing will move back to the US!

I would go a step further and let the Bush Tax Cuts expire with any increase in revenue, every dollar goes to debt reduction. NOT ONE PENNY gets spent. Go back to Graham, Rudman, Hollings.
Also, DO NOT repeal any Obamacare taxes, he owns them, do not let him off the hook.
Once we have more tax payers, more people with "skin" in the game we can then have a serious discussion on Cutting Spending and Cutting Taxes.

Click here to download the PDFOn behalf of hundreds of thousands of FreedomWorks members nationwide, I urge you to vote “No” on the Obama-Pelosi-Reid budget being considered this week.  Their budget taxes too much, spends too much, and borrows too much.  And, potentially worst of all, it would open the door for socialized medicine and a massive energy tax to be enacted later this year without substantial debate through the reconciliation process.

It’s quite amazing to see how busy gun stores are and how empty the ammunition shelves are these days. Also, record numbers of people are applying for concealed-carry permits. Read more about what I think is a very interesting subject in my article at Human Events today: “Are You Hoarding Ammo?” http://www.humanevents.com/article.php?id=31268

Politico is reporting that GM CEO Rick Wagoner is resigning, effective immediately, “at the government’s behest.” While my gut reaction was anger at Obama, after a few minutes I’m less angry.

"It is with deep regret that I submit my notice of resignation from A.I.G. Financial Products." The New York Times on Tuesday ran an op-ed entitled "Dear A.I.G., I Quit!."  It's the real letter of resignation of Jake DeSantis, executive vice president of AIG's financial products unit.  Read it here.

An alert activist just sent us this story from Bloomberg.

I used the word “incorrect” in the title because I’m feeling momentarily generous. A more precise word would probably have been “lied". Today’s news about deficits is, not surprisingly, much worse than the already-bad picture painted for us by the Obama administration and their ridiculously rosy economic forecasts. An AP article entitled “$1 trillion deficits seen for next 10 years” explains that:

0
03/20/2009
AIG: "A Mistake at the beginning"
"https:\/\/www.freedomworks.org\/content\/aig-mistake-beginning?social=facebook_share"
null
https://fw-d7-freedomworks-org.s3.amazonaws.com/styles/thumbnail/s3/te_social_media_share/fw_default_0.jpg?itok=35IWEBMb
Blog

AIG: "A Mistake at the beginning"

The media and political furor of the week is the employee bonuses paid by AIG under contracts that existed prior to the government’s effective takeover of the company. And while the President as well as politicians of both parties are fulminating about the payouts, voter anger should be directed more at those very politicians than at AIG.

Happy Saint Patrick's Day!  Each year since I became interested in development economics, St. Patty's day has reminded me of the free market revolution that took place in Ireland in the nineties.  Ireland was the poorest economy in Europe then, but by 2006, it had the highest per capita GPD on the continent and economic growth rates of 9 percent or higher.  How did they achieve it?  They massively reduced the size and role of government in their society.  They cut taxes, abolished agencies, cut spending, and stopped inflation.  They moved from one of the least free states in Europe to the freest.

The End of American Oil Production?

Governor Jan Brewer addressed the 49th Arizona legislature in a joint session yesterday, proposing a five-part plan to help the state recover from a projected budget shortfall of $3 billion. Though she urged approximately $1 billion in budget cuts, the governor simultaneously called for a $1 billion tax increase,without specifying which tax she planned to hike or the duration.  This plan must be stopped.Take Action and tell your elected officials you oppose these tax hikes.  Please follow-up your message with a phone call to Governor Brewer at (602) 542-4331.Arizona’s economy is already struggling.  The last thing the state needs is increased taxes. Long term prosperity follows permanent tax cuts, reducing regulations that stifle business, and supporting growth in the private sector. People are the driving force of economic expansion and money is best left in their hands. Contact your elected officials and urge them to cut spending without increasing taxes. Governor Brewer should cut the waste and use taxpayer dollars more responsibly.  Families around the state are doing more with less and there’s no reason the state can’t stick to a budget as well. Also, make sure you check out IamWith Rick.com.  Many of you have seen the Taxpayer Tea Parties spreading around the country and you will be excited to learn that we are planning Taxpayer Tea Parties in Arizona! This is because of the overwhelming interest in joining our effort to fight wasteful government spending and the massive bailouts.You can rsvp by visiting IamWithRick.com and signing up to attend the tea party closest to you.As CNBC's Rick Santelli pointed out, it's time for the American people to defend free markets and take to the streets in protest!These are two great ways to fight the tax and spend plans that affect us all. Tell your state leaders Arizona can’t afford a $1 billion tax hike and join us at a tea party.Thank you for your ongoing support of FreedomWorks and our fight for lower taxes, less government, and more freedom.