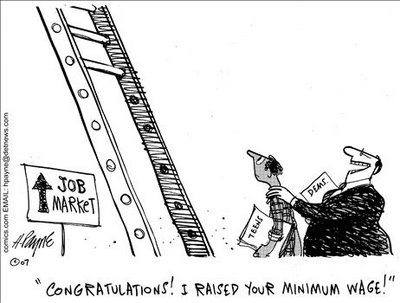 Still a student whose resume was a blank sheet of paper, I walked into work on my first day as an assistant leader at a children’s summer camp with no experience. I had no skills concerning supervising children or dealing with staff, and the first weeks were filled with my training by senior staff rather than me contributing to the program. I was hired as an investment in the hopes that at the end of training, I would be able to provide enough services that the camp would make a profit. With that investment, there was the risk that I would not be worth the minimum wage (which back then was around $7.25 an hour) I was being paid. Think about it – that is a high wage to pay a teenager who needs to be taught everything, starting with the fundamentals of showing up to work on time, especially when you are paying them to allow you to train them. If this is the case, should you be allowed to pay them less, at least until they can prove they can do their job? The government says no, through minimum wage legislation.

As a business owner, minimum wage places an artificial price tag on the returns you have to get from your investment in your new trainee. If you don’t foresee them being able to provide $10 worth of work nearly immediately after you hire them, then you will lose money on them. So, how do you avoid this problem? You stop training teenagers and you start hiring people with previous work experience. If you are forced to pay a minimum wage of $10 an hour, why hire a resume-deficient 16-year-old when you can hire a 20-year-old who has worked at a daycare and already has the training? And, if there isn’t an experienced worker currently applying, wouldn’t it be worth the wait to stretch your current staff a little thin until one comes along: just so you can avoid paying someone to teach them how to do their job? Absolutely.

If this is all so logical, then where do the effects of the minimum wage laws leave the 16-year-olds? Answer: Unemployed. Without being able to secure a job that provides training, someone new to the workforce has no opportunity to be trained or to gain skills that will move them up the ladder into bigger and better positions. Instead, companies are incentivized to hire people who can provide work that is worth the higher earnings that the government mandates – or just hire fewer people. Therefore, the very group that the legislators in Washington are attempting to help – the young, low-skilled worker – is the one hit the hardest economically.

Legislators believe that a minimum wage set at $10.10 an hour will result in giving low workers a raise. Instead, it results in many of them not being able to be hired in the first place. You have to be taken on as an investment in order to become an asset to your workplace. At 16 years old, I can say with absolute confidence that I was not worth $10.10 on my first day at work. Were you?

This argument is flawed because of one major piece missing from it: Not all minimum wage jobs are staffed by teenagers. In fact, the single largest employer of Americans in the US are now all big box stores whom pay minimum wages and are staffed with employees of all age brackets.
I was absolutely amazed by the GOP's vote against the minimum wage proposal this week in more ways than one. Here we are again: the GOP decided to vote against legislation that in turn would have helped the very demographic they fail to attract and can't hope to win further Presidential elections. Those voters will remember this vote and will react accordingly in 2016.

I find your argument to be flawed as well. Any age working at a new job/position takes time and investment to educate in their field of work. These big box stores may seem like the work is easy but after working for Target I know there are some key areas that do take time to learn. The other item to take into consideration is that the individual may not work out for the company, so you were paying someone a higher wage and not benefiting from their full work output that doesn't sound like sound business to me. Other items to think about, so you raise the minimum wage let say, after doing this certain companies that currently provide you products close to manufacturing prices has to increase their prices due to cost of employment now. This increase in price will have a trickle effect that eventually will bleed into other markets an example of this simply is the fuel market you can't tell me that you have not noticed a gradually increase in cost of goods that is related to the increase of fuel costs.

What I am trying to pass along is yes you could raise the minimum wage, but in doing so you will most likely increase the costs of goods; which has the potential of negating your minimum wage increase and the possibility to eliminate jobs from hiring individuals with no past experience.

This really sounds like this would cause some issues on the College Loan bubble when you think about it. If I just got out of College with no past experience in my field and the minimum wage was increased and employers didn't want to take a risk on me this could easily cause the Loan bubble again.