In the days leading up to President Obama announcing his gun control plans, and now that he has, the focus of Republicans and Conservatives has been squarely on his ever-encroaching attack on the Second Amendment.  While the important debate over gun rights continues, we should not forget another vastly important detail. 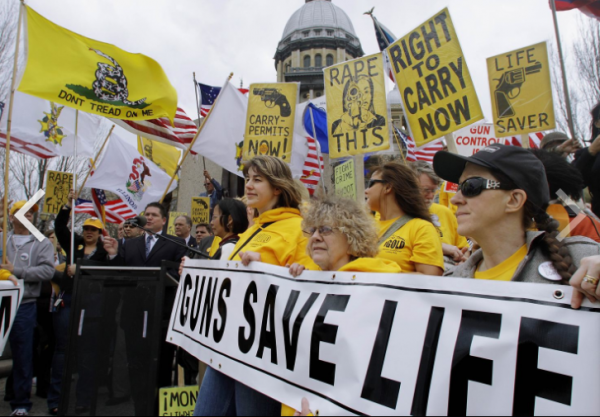 President Obama has a spending problem.  In his FY2013 budget, the President submitted $3.8 trillion in new spending which does not include the $500 million (or by some accounts $45 billion) he would like Congress to spend on his gun proposals.  Obama, and his fellow Democrats, would like to point to his spending cuts to deflect his out-of-control budget going forward, but in truth he has admitted to cutting (over the next ten years) only $1.7 trillion.  As Ed Morrissey notes at Hot Air, “the federal government is on track for a fifth straight year of trillion-dollar deficits under Obama.”  Many Americans may think the President’s gun control spending is the first in 2013, forgetting that the federal government started its fiscal year last October.  The government actually spent $638 billion before we even reached December.  At the current rate, the government is spending $10.45 billion per day, 435.8 million per hour and borrowing 46 cents for every dollar it spends.  The growth of the country’s spending is so much that the money it takes in, up 10% already this fiscal year, cannot keep pace.  If this is avoiding the fiscal cliff, we’re in for a nasty fall.

Like any addict though, the President places blame for his failed personal responsibility on someone else.  In Obama’s case, Congress is solely to blame for not paying down the debt.

While I will negotiate over many things, I will not have another debate with this Congress over whether or not they should pay the bills that they've already racked up through the laws that they passed. Let me repeat: We can't not pay bills that we've already incurred. If Congress refuses to give the United States government the ability to pay these bills on time, the consequences for the entire global economy would be catastrophic -- far worse than the impact of a fiscal cliff.

It’s an interesting game Obama likes to play.  He suggests massive new spending, Congressional Democrats have to play along or they risk upsetting the public, they pass his bills and then he blames them for the new spending.  The President then uses end-of-the-world scare tactics to force Congress to raise the debt ceiling so he can spend more.  Meanwhile the subject of cutting spending in any substantial way never makes it into the conversation.  Fortunately, the timing and subject of Obama’s latest spending spree doesn’t work well with Democrats’ reelection concerns.  With a number of Democrats facing red-states, including Majority Leader Harry Reid, a battle over gun-rights isn’t a conversation they’d like to have right now.  The President’s new spending for gun bans won’t likely even make it to the House.

If we do want to talk guns though, we may want to discuss the one the President is using to shoot a hole in our chances of ever climbing out of our nation’s debt.  Even having “avoided the fiscal cliff” Fitch Ratings has advised the U.S. credit rating to be downgraded again.  Given all that we know about the likelihood of President Obama slowing his spending habits, can we really blame them?  If the only defense against Obama pressuring Congress to spend more, while blaming them for the increasing debt, is the notion of upcoming elections, perhaps our national conversation should turn to more frequent elections.