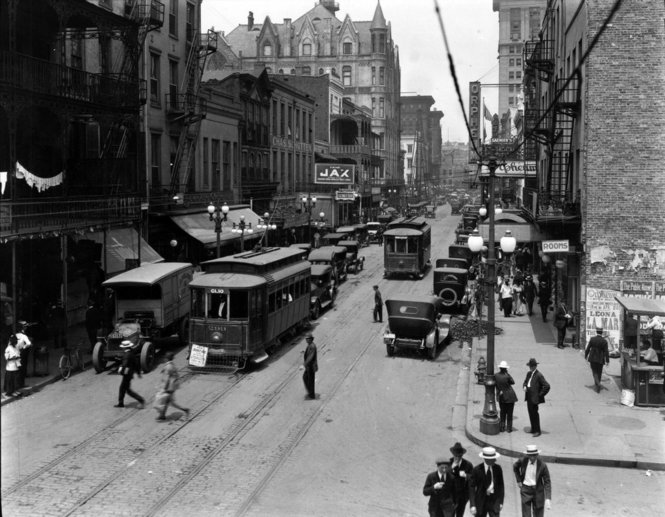 When Blanche DuBois stepped off that streetcar named Desire and stepped into her sister’s rough French Quarter neighborhood, it was an era far different from our own. The New Orleans portrayed in Tennessee Williams’s iconic play wasn’t idyllic or gentle, but it had the charm of post-war cheerfulness. America had slogged through the Great Depression, won the fight against Hitler, and was rewarded with decades of prosperity. Stanley Fischer may have been a violent lout to his wife and sister-in-law, but there was a certain innocence to the time after the Great War’s sequel and before Lyndon Johnson’s guns-and-butter debauchery. Civil society was still a strong presence in American life and disputes were handled neighbor-to-neighbor. The idea of ubiquitous government surveillance in peacetime was alien.

And you can bet Blanche didn’t have to sit under the watchful eye of a high-definition security camera as she rode that rickety streetcar away from her unseemly past.

Today’s America is much different. Government snooping is now a way of life. Our online activity is cataloged in the dusty basement of some bureaucracy. Our phone records are snatched up and recorded before we end our conversations. Our very locations are given up by cellular signals emitted from our smartphones. Polls show the public’s universal contempt with having their whereabouts tracked and archived. Yet only a handful of congressmen are actively fighting to restrain the National Security Agency’s mass data collection.

The collection of phone records began in earnest under the George W. Bush presidency, but has accelerated under the watch of the Obama Administration. But it’s only one element of the accelerating surveillance state we find ourselves in. Public monitoring is jumping out of the digital world and into the corporeal. Here in Washington D.C., the next, logical step in keeping tabs on everyone is starting. In her latest DC Rider column, Vicky Hallet outlines the Metro Transit Authority’s plan to install security cameras in a new series of trains that will fully debut in 2018. Affixed to the ceiling of individual cars, the cameras will be used to monitor potential crime and catch perpetrators. They will also serve as a symbol: anonymity enjoyed on public transportation is quickly becoming obsolete.

The glitz and glamor capital of the nation is slowly morphing into an Orwellian paradise, replete with around-the-clock monitoring of all public activity. D.C. law enforcement already utilizes 300 traffic cameras to keep an eye on activity above the underground rail line. John B. Townsend, a spokesman for AAA Mid-Atlantic, says the city has eyes “in every quadrant and quarter of the map and streetscape of the city.” It’s basically the District’s own version of NSA snooping.

Washington D.C. isn’t the only city beefing up its surveillance infrastructure. The emergence of tracking technology has happily coincided with the diminishment of social trust. According to a poll conducted by the Associated Press and GfK group, two-thirds of Americans believe “you can’t be too careful” when you deal with other folks. In 1972, only half of survey responders answered in the affirmative to the same question. With social trust retreating, it’s not hard to see why government security cameras are becoming vogue. The threat of crime and terrorism only exacerbates the willingness for government to provide safety in the form of spying.

The see-saw effect of a growing, paternalistic government and the fraying fabric of social trust is a recipe for authoritarianism. Without private institutions to fall back on, all that’s left is the nanny state. And since government can’t ever settle for just writing people checks, it also uses the new-found reliance to impose more draconian policing measures. For all the good intentions behind a generous welfare system, there lurks the insatiable appetite for control.

In D.C., it’s easier for government to take advantage of the neo-liberal isolationism so prevalent in its young denizens. Transient cities tend to be filled with hard-working, fast-living high achievers who take more interest in their social status than their own liberty being undermined. As University of Notre Dame professor Patrick Deneen writes, young millennials

“are a generation that is increasingly formed by a notion of autonomy as the absence of any particular ties or limiting bonds—and while they highly mistrust most institutions and relationships, they nevertheless view the government as a benign source of support for their autonomy.”

D.C. is the town for millennials, and these young adults working for or with the government are unlikely to express much concern over widespread surveillance. God forbid it interfere with updating their “status” on social media, after all. Older residents of the District aren’t likely to make a fuss either. Bureaucrats and contractors - two professions that encompass a majority of the populace - tend to be more accepting of bigger government, given their livelihood depends heavily on the centralization of power. That’s why the advent of surveillance cameras in the metro system won’t see much in the way of pushback. It will be accepted as the cost of doing business - and the cost of a society where everyone views each other as a potential threat.

When Senator Rand Paul expressed concern over the NSA’s spying dragnet, Rep. Peter King - the biggest, most boisterous cheerleader for government snooping in Congress - called the criticism an acute episode of “paranoia.” It was a childish tantrum; even though the line of attack is all too common in Washington. Political leaders assume the spying carried out by nameless camera operators is done with the best intentions. They rarely think the practice will be abused, and they rarely consider the socio-cultural effects of a worldwide panopticon.

What does it say about our society when we no longer trust being in each other’s company? What does it say about us, as a country, that we willingly accept security at the cost of freedom? For how long will our already weak social bonds remain connected as government continues to snip away? Is the innocence and trust of the Eisenhower-era truly gone?

The seamy, raucous environment of 1950s New Orleans may not have been perfect, but there was a certain level of social trust. Informal codes were followed. It was a more halcyon time, when people were left to their own devices in solving their affairs. The need for mass surveillance was non-existent. When Blanche deliriously declared she “always depended on the kindness of strangers,” there were strangers around to depend on. Today, strangers are seen as the enemy. We can’t be too careful, too trusting, or too monitored. The government may spy but it’s ultimately the people who allow it to happen. If culture is the driving force of politics, it’s going to take more than paper laws to correct an apathy toward surveillance. Remembering the America of our grandparents may be a good start.