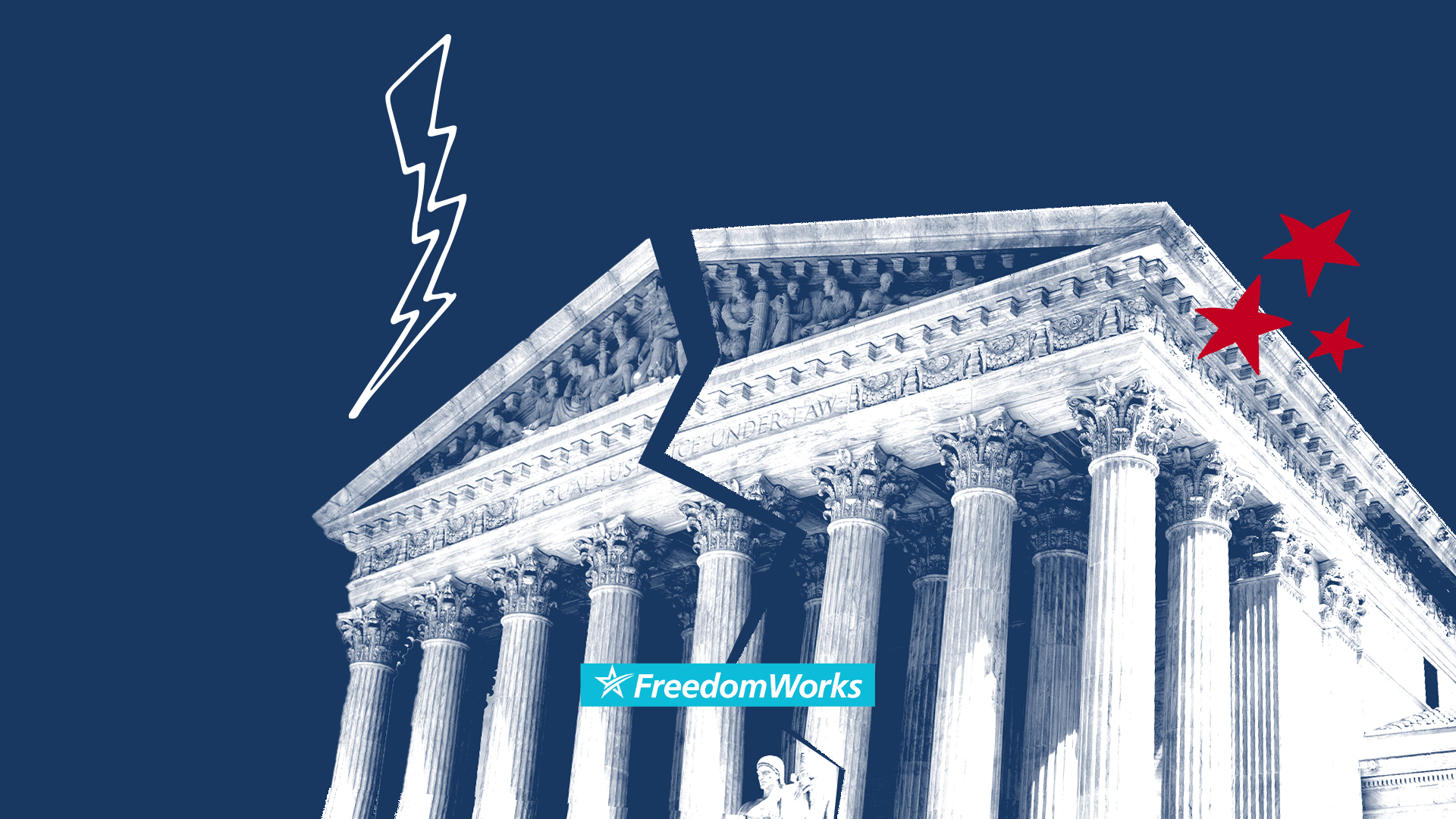 In early October, the FreedomWorks Foundation submitted a formal comment to the Commission strongly opposing Court expansion of any kind. That comment was signed by almost 4,000 activists.

While Article III, Section 1 of the Constitution provides that the “judicial Power of the United States, shall be vested in one supreme Court,” it does not specify the size of the Court. At the outset, the Commission provides a history of how many justices have sat on the Court, and how those numbers came to be. Ultimately, the Commission concludes that the size of the Court has fluctuated over time due to both institutional and political concerns.

In 1789, the first Congress established that the Court would have six justices. At that time, justices did more than hear cases brought before the Court, they also rode circuit. In turn, Congress established six lower federal circuit courts where justices would hear cases and render decisions. After Thomas Jefferson defeated John Adams in the presidential election of 1800, the outgoing Federalist Congress reduced the Court’s size to five. However, President Jefferson and the Democratic-Republicans repealed the actions of the previous Congress, and the Court went back to six. In 1807, when Congress added a seventh circuit, it also added a seventh justice. And when Congress established an eighth and ninth circuit in 1837, Congress also added an eighth and ninth justice.

While the creation of a new circuit meant that Congress would add an additional justice to the Court, there were also political considerations involved. The Federalists reduced the size of the Court in 1801 to prevent President-elect Jefferson from filling a vacancy. The Democratic-Republicans repealed the acts of the previous Congress to give President Jefferson an opportunity to nominate a justice. Moreover, after the Court’s infamous decision in Dred Scott v. Sanford (1857), lawmakers believed the Court needed reform. Indeed, in 1863, the Republican Congress added a tenth seat so President Lincoln could nominate justices who supported an anti-slavery agenda. But after President Lincoln was assassinated, Republicans reduced the future membership of the Court to seven to prevent President Andrew Johnson from nominating justices that might prevent reconstruction in the South. Once President Grant was sworn into office, however, the Republican Congress returned the Court to nine because they were comfortable with the nominees President Grant would put forward. The Court has remained at nine since 1869.

In 1937, after losing a series of high-profile losses at the Court, President Franklin Roosevelt revealed his “Court-packing plan.” Under the plan, the President could appoint one additional justice for each justice on the Court over the age of seventy. While President Roosevelt originally argued that more justices were needed to handle a growing caseload, he later acknowledged the real purpose was to alter the Court’s jurisprudence. The Court-packing plan enjoyed some support after being introduced, but it quickly died after the Court upheld a series of federal regulations that foreshadowed a Court more willing to accept an expansion of federal power. The plan died in June of 1937 when the Senate Judiciary Committee voted to reject it.

In the 1950’s, some members of Congress sought to amend the Constitution by adopting an amendment that would fix the Court at nine. While this amendment received the necessary two- thirds support in the Senate, it failed in the House. Most importantly, both supporters and opponents of the amendment agreed that Congress has broad power to expand or contract the size of the Court, and the only way to freeze the Court’s size was with a constitutional amendment.

Analysis of Proposals for Court Expansion

The Commission’s most important legal conclusion is that Congress has broad power to structure the Court by expanding or contracting the number of Justices. As stated above, nothing in the text of the Constitution specifies the size of the Court. Moreover, Congress has broad authority under Article I, Section 8, “[t]o make all Laws which shall be necessary and proper for carrying into Execution the foregoing Powers, and all other Powers vested by this Constitution…” Commonly known as the “necessary and proper clause,” the clause gives Congress broad authority to enact federal legislation as long as the legislation constitutes a means that is rationally related to the implementation of a constitutionally enumerated power. See United States v. Comstock (2010); McCulloch v. Maryland (1819).

In addition, the Commission bases this conclusion on strong historical arguments. In the nation’s first century, Congress changed the composition of the Court eight different times. And as stated above, Congress changed the membership of the Court for both institutional and political reasons. In sum, the Constitutional text coupled with historical practice leads to the conclusion that Congress likely has broad power to expand or contract the size of the Court.

The Commission next considered whether an expansion of the Court should be pursued as a prudential matter. Although the Commission addresses both sides of the argument, it details serious concerns that expanding the Court might cost the Court its legitimacy. To support this, the Commission quotes polls that suggest most of the public does not want Court expansion, and it notes that even advocates of Court expansion acknowledge that their proposal might be seen as a partisan maneuver. Moreover, the Commission recognizes that if the Court does expand, there might be a continuous cycle of future expansions that leads the public to see the Court solely as a political football. And if this were to happen, the confirmation process would become unimaginable.

Although proponents of Court expansion believe it would serve democratic values, the Commission does not necessarily agree. At bottom, the Commission concludes that “[t]here is no guarantee that future expansions would lead to a Supreme Court committed to protecting the values that advocates of expansion today believe are under threat.” The Commission also notes that there is no guarantee an expanded Court would overturn existing jurisprudence, an important goal of those who support Court expansion. In response, proponents of an expanded Court believe that like President Roosevelt’s Court-packing plan, an expansion or attempted expansion might lead the Court to be more deferential to the political branches.

While expanding the size of the Court in the short term might cost the Court its legitimacy, the Commission takes a more open view to expansion over a longer period. As an example, Congress could set the Court to twelve Justices, but provide that only one of these seats can be filled by a President in his or her four-year term. The Commission argues that under this model, there might not be the same charges of partisanship, and it might reduce the temperature of confirmation battles. However, the Commission notes that expanding the Court in this way might not reach the goals that those who want the Court to expand want. There is no telling if the composition of the Court would change, whether existing jurisprudence would be overturned, or whether the temperature over confirmation battles would go down.

Finally, the Commission details three proposals that change the composition of the Court in a different way than direct expansion. The first proposal features a rotating set of justices from among a larger set of federal judges from Appellate and District Courts. The second proposal creates a system where a Court larger than nine exists, but different panels of justices hear different cases. The third proposal structures the Court over ideological balance. Under that system, the Court would expand, a set of justices would be affiliated with the Democratic and Republican Parties, and those justices would then pick additional justices to place on the Court.

However, the Commission does not take a favorable view of any of these proposals, finding that “these reforms present more serious constitutional questions than basic Court expansion and that they also offer uncertain practical benefits.” With respect to the first two proposals, the Commission’s most pressing concern is that the constitutional text provides for “one supreme Court.” Under the first proposal, justices on the Court might be rotated off the Court without dying, retiring, or being impeached. That means that justices who have constitutionally based life tenure protections under Article III, Section 1’s “good behavior” provision would be removed from their seats by statute. The second proposal is problematic because Congress would essentially create two Courts—one that hears Original Jurisdiction cases, and another that hears Appellate Jurisdiction cases. Thus, there would be two Courts, not one.

The third proposal is also problematic, but for different reasons. For starters, under Article II, Section 2, the President is given the nomination power and the Senate is given the confirmation power. Instead, this proposal does away with these explicit constitutional commands. Justices on the Court would pick additional justices with no nomination and confirmation process whatsoever. Moreover, for those who say the Court already suffers because it is too partisan, this proposal seems to exacerbate that problem because some Justices would be identified by political party.

In sum, while Congress likely enjoys broad power to change the size of the Court, the Commission’s draft report does not look favorably on Court expansion in the short term. Expansion might cost the Court its legitimacy and exacerbate problems that those who believe the Court should be expanded want to avoid. However, the Commission does look more favorably on expanding the Court over a longer period in the hopes it would lessen the stakes of each vacancy. The Commission’s final report will be submitted to President Biden by November 15, 2021.