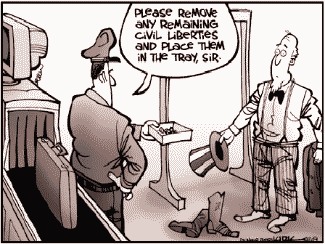 This is still America, right? We still have a Constitution and a Bill of Rights, correct? Lately, it sure doesn’t seem like it. It seems like we are constantly hearing new stories of our rights being under attack here in America. This week, it’s the Fourth Amendment which is being systematically destroyed.

The Fourth Amendment to the U.S. Constitution protects American citizens from unreasonable searches and seizures. To any reasonable person, this would include the collection of DNA samples. Unfortunately, it would seem that our Supreme Court does not have reasonable people in the majority. Yesterday, they ruled that the police can collect DNA from suspects who have been arrested. Not convicted, just arrested.

The argument was that these DNA tests can help to solve previously existing cases. While this may be true, what about innocent people who now have their DNA in the system? There doesn’t have to be suspicion of guilt in another crime (or proven guilty in the crime for which the person was arrested), the DNA can be collected and stored. Just in case.

Justice Anthony Kennedy wrote the majority’s 5-4 decision, saying that "Taking and analyzing a cheek swab of the arrestee's DNA is, like fingerprinting and photographing, a legitimate police booking procedure that is reasonable under the Fourth Amendment."

Justice Antonin Scalia saw it differently, and wrote the dissent, true to his reputation for colorful opinions. He said

"Make no mistake about it: because of today's decision, your DNA can be taken and entered into a national database if you are ever arrested, rightly or wrongly, and for whatever reason. This will solve some extra crimes, to be sure. But so would taking your DNA whenever you fly on an airplane."

He went on to say that our founding fathers would never have stood for this,

"The proud men who wrote the charter of our liberties would not have been so eager to open their mouths for royal inspection."

They created the Bill of Rights to avoid just such overreaches.

If someone is wrongly arrested, their DNA will still be in a national database. Forever. Is this something that we are supposed to accept in America? Are we to approve of this as the new normal? Wherefore art thou, civil liberties?

Dylan. although Dale`s remark is impressive... on thursday I bought a top of the range Citroën DS after having made $5152 this last month and-also, ten/k last-munth. it's certainly my favourite-job I've ever done. I started this 10-months ago and almost straight away started making a cool at least $74, per hour. I follow the details on this straightforward website,, kep2.ℂom