On Monday in Lewisburg Pennsylvania, the Susquehanna Valley Tea Party partnered with FreedomWorks as Ana Puig and Anastasia Przybylski trained over 100 activists on GOTV efforts for local, state and federal elections, the up-coming school choice battle, the strategy of FreedomWorks to elect principled conservatives like Evan Feinberg and for the all-important Senate take over in November of 2012. With the Pennsylvania primary just two weeks away, these GOTV training events are key to winning at every level in this important election year.

The Susquehanna Valley Tea Party learned about “FreedomConnector”, the social media network of FreedomWorks. With over 170,000 members, FreedomConnector is an excellent social network for Tea Partiers to connect, organize for various groups or events, host town halls and much more. To join FreedomConnector, click here

Aside from the important issue of electing principled conservatives, Pennsylvania is facing another tough battle, the battle for school choice.  As Ana and Anastasia mentioned at Mondays event, FreedomWorks will once again, lead the fight for school choice as the children of Pennsylvania deserve real education reform, not more bloated bureaucracy. Returning the power of decision making from the bureaucrat back to the parent is going to be a hard fought battle that FreedomWorks is committed to winning. 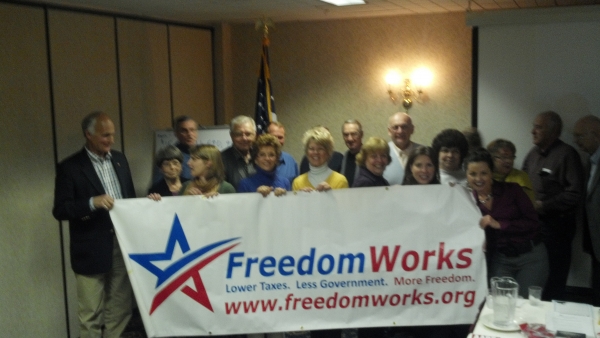 Thanks Ana and Anastasia for an informative and inspiring presentation Monday evening.