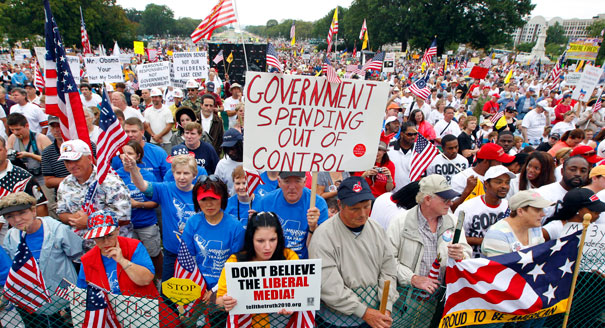 Happy Birthday to the little movement that could.

Ignited by a spark from the most unlikely of places-a cable business news channel watched mostly by investors-and spread by social media, a surprising revolution had its most humble beginnings five years ago today.

The first coordinated gatherings of the modern American Tea Party movement were held on February 27th, 2009, initially as an expression of frustration over the Homeowners Affordability and Stability Plan, which had been announced just before Rick Santelli's now famous (or infamous if you're a more establishment DC type) rant. In truth, it was the result of years of frustration with an ever-creeping federal presence in every aspect of Americans' lives.

What was unique about it was the way grassroots activists instinctively found ways to utilize new media to work outside the more conventional and prescribed way of doing things. In ancient (early 21st Century) times, Santelli's outburst may have hit some evening newscasts and may have gotten some word of mouth publicity, but the likelihood of it spreading beyond its cable niche borders wasn't something you would want to bet on.

In 2009, it made its way to YouTube almost immediately and was passed around on Facebook and Twitter (which even those of us who used it regularly barely understood back then). A little more than a week after this now famous moment, people gathered in sync at an agreed upon time all over America.

Here in Los Angeles, a handful of us who didn't really know each other used social media to connect and throw together a gathering on the Santa Monica Pier. The aforementioned agreed upon time meant we had to get people to drive to Santa Monica during morning rush hour, find parking and then walk to the end of the pier.

We were pretty sure only the organizers would be there.

To our surprise, somewhere between two and three hundred people (my closest recollection) made the effort that morning, no small feat given the logistical difficulties and political bent of the City of Angels.

These gathering would explode on April 15th of that same year and go on to mobilize and heavily influence the 2010 midterm elections.

Since then, it has been declared either dead or the most powerful force in Republican politics almost weekly by the press. Very often, it will be called both...by the same reporter...in the same article.

It is also one of the most misrepresented political movements in American history. The Tea Party (I use the capitalized form because it's easier than always typing "various tea party groups" and things like that) is a disruptive force that makes those invested in the status quo very nervous. So they attempt to marginalize the movement with disinformation. What they have learned is that we keep using new media to debunk their claims and continue trying to make an impact.

Expectations have always been high, both from within and without. Five years may seem like an eternity in the digital age, but this is still a nascent movement. There have been hits and there have been misses, which is perfectly normal. The hits are all but ignored and the misses are magnified, then often distorted.

But we keep plugging along.

The Washington Post wonders today if we will be here in five years.

It is with devious good cheer that I tell the mainstream media, the Democrats, and the entrenched status quo mongers in the GOP that we have no plans whatsoever to relocate.

And vilification of the Tea Party continues. Following the latest Obamacare defund battle, there's been a recent resurgence of Tea Party hatred from Democrats. Democratic Congressman Alan Grayson, known for inflammatory rhetoric, decided to capitalize on the fresh wave of anti-Tea Party sentiment.Congressman Grayson took to MSNBC to discuss his disdain for Tea Partiers, then sent out the following email: