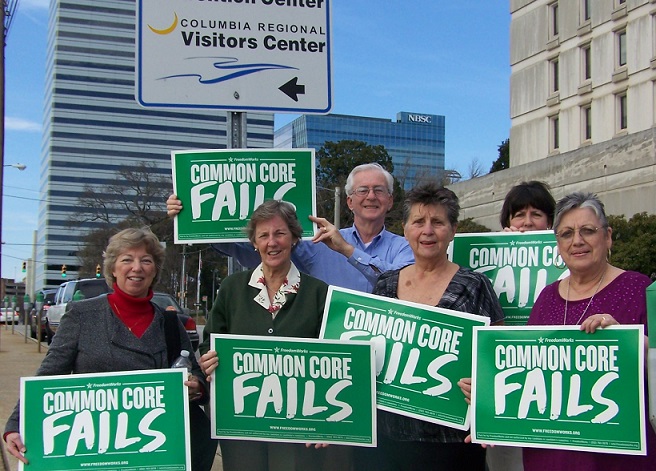 With this dynamic in place, it’s easy to think of the teachers as the bad guys, trying to separate children from their parents with ever increasing levels of control. But this is a mistake. Common Core was not designed by teachers, but rather by bureaucrats who do not understand the classroom, and many teachers are among the loudest voices of opposition, angry at the way the standards prevent them from effectively doing their jobs.

To illustrate this point, Becky Gerritson of the Wetumpka Alabama Tea Party filmed interviews with a number of teachers willing to speak out about their frustration with Common Core.

One woman, who asked not to be identified, spoke out about the negative psychological impact the increased high-stakes testing is having on children. Whereas her students formerly loved school, she now reports that they are “crying constantly.” “We’re becoming cookie cutter teachers,” she continued. “Our children are cookie cutter children.”

Carol Brown, a kindergarten teacher of 19 years, protested the way the standards force children as young as five or six to spend all day taking written tests, with no time for creative play. When she voiced her concerns publicly, she was told she had to stop or else quit her job. Unwilling to be allow herself to be gagged, she quit.

Mike Parsons, a veteran teacher in Huntsville, Alabama, spoke out about privacy and data collection concerns. “We’re starting to profile our kids,” he said. “Parents are unaware of this.”

Lisa Harris, a retired teacher from Georgia, puts her finger on why the standardization and federalization of education is a problem.“I never saw two children that were alike. They all needed individualized attention,” she said, noting the difference been equality and fairness. The quest for equality means that students are treated unfairly, not receiving the attention they need, and being forced to conform rather than pursue their own path. Applying an “equal” curriculum to a wide variety of students who each learn differently and at different paces is not fair to anyone.

Harris also noted that Common Core is not a Republican or Democrat issue. It goes beyond that, instead dividing people who understand how children learn from those in the federal government who don’t. “The problem with all of this,” Harris said, “is that it’s being controlled by bureaucrats who know nothing about education, in Washington, DC.”

It's not just individual teachers who oppose Common Core, but an increasing number of teachers unions, who were initially supportive of the standards, have come out against them after seeing the devastating effects on classrooms.

You can watch the full interviews here.