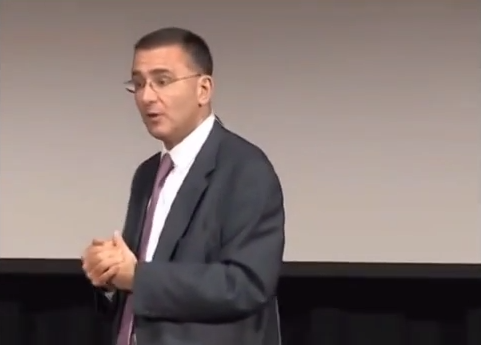 Another video has surfaced in which Jonathan Gruber insults voters. This time, however, the MIT economist and ObamaCare architect refrained from calling Americans "stupid," though there isn't much of a difference from what he said in previous comments (covered here and here).

During a November 2012 speech at the University of Rhode Island, Gruber spent a few moments discussing ObamaCare's "Cadillac tax" and how it became part of the law. He led into this part of his talk by arguing that health insurance benefits should be taxed as income, though he admitted that it was "politically impossible" to do so.

Gruber credited then-Sen. John Kerry (D-MA), whom he calls a "hero," with the excise tax on "those evil insurance companies" for higher tier health plans. This, he says, was politically viable because it was a tax on insurers, who, in turn, passed it onto consumers.

"So, basically, it's the same thing. We just tax the insurance companies. They pass it on in higher prices that offsets the tax break we get. It ends up being the same thing," Gruber boasts. "It’s a very clever, you know, basic exploitation of the lack of economic understanding of the American voter."

It's a distinction without a difference, a nicer or more diplomatic way of saying the same thing. Gruber may want to start choosing his words a little more carefully. The Washington Post is reporting that some House Republicans, alarmed by the MIT economist's remarks, are kicking around the idea of hearings on the deception used to ram ObamaCare through Congress.