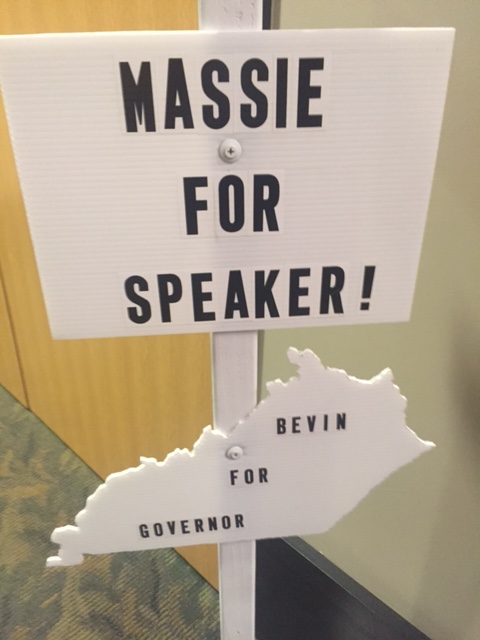 On Wednesday evening, FreedomWorks was proud to host a town hall meeting with Congressman Thomas Massie in the Cincinnati suburban community of Erlanger, Kentucky. The event was co-hosted with the Northern Kentucky Tea Party, a group of local grassroots activists fighting for fiscal responsibility, limited government, and free markets. Mr. Massie has a lifetime FreedomWorks score of 94%, indicating a pristine pro-liberty voting record.

In introducing Mr. Massie, FreedomWorks’ National Director of Grassroots Noah Wall described his leadership, standing strong for conservative principles against a congressional establishment content with the status quo of cronyism and big government. In conjunction with the House Freedom Caucus, those efforts recently began to come to fruition -- first, with the recent resignation of John Boehner from the Speaker’s chair; then, with establishment favorite Kevin McCarthy’s withdrawal from the leadership contest.

Interest in the Speaker’s race drew much attention Wednesday evening, drawing over 100 activists from Kentucky’s Fourth Congressional District and the surrounding area to attend. Mr. Massie celebrated the successful efforts of grassroots activists in forcing Mr. Boehner and Mr. McCarthy to recognize principled conservatives as a force to be reckoned with, before going on to explain the prospects of electing a more effective leadership.

Though rumor has it House Ways and Means Committee Chairman Paul Ryan, who has a lifetime FreedomWorks score of 81% is considering jumping into the race, the only announced candidates remain Congressman Jason Chaffetz of Utah, who owns an 88% lifetime rating, and Congressman Daniel Webster of Florida, with a score of 64%. The House Freedom Caucus as a whole has chosen to endorse Webster’s candidacy, as has Congressman Massie, due to the open process Webster promoted as Speaker of the Florida State House in the 90s. FreedomWorks has yet to make an endorsement in the race.

Massie also commented on another major victory for the grassroots. On Wednesday, current House leadership announced potential changes to procedural rules, opening up the legislative process to more principled members who have been marginalized under Speaker Boehner’s tenure.

According to Politico, the contents of a letter co-written by Representatives Cathy McMorris Rodgers and Luke Messer spell out plans to address concerns voiced by the House Freedom Caucus. "We heard clear and consistent messages about the need to follow ‘regular order,’ open up the process, and empower individual Members.” FreedomWorks strongly supports efforts to make the Republican Conference a more decentralized, bottom-up organization, with a leadership that reflects the consensus within its membership.

Recent events should give ordinary Americans cause for jubilation. Despite the claims of naysayers, the hard work of patriotic activists across the country has certainly paid off. First Cantor, then Boehner, and now McCarthy. The fight ahead for true conservative leadership looks promising.