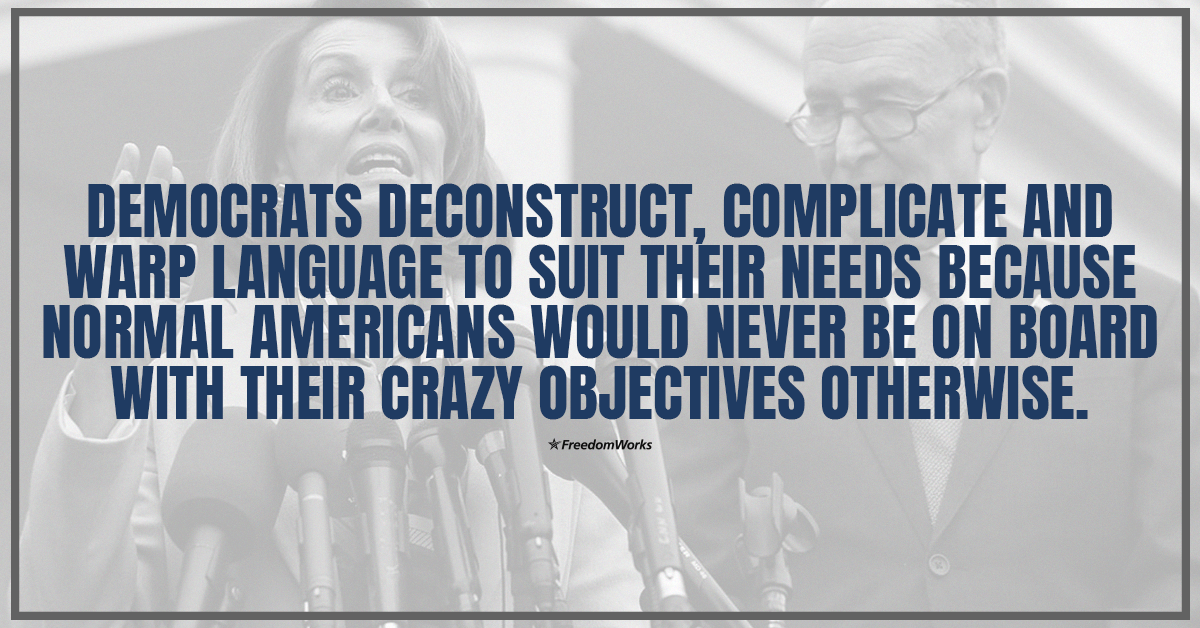 Whenever I catch a clip of Democrats proselytizing on CNN or MSNBC, I cannot help but think to myself: Do Democrats have their own dictionary?

That could be one of the possible explanations for why the meanings of the words and slogans that Democrats use deviate so wildly from the ones that most Americans use.

Take for example “voting rights.” To most, exercising the right to vote means showing up to the polls on designated election days and following normal, noncontroversial protocols such as showing government-issued I.D. to verify your identity and being physically present at the voting booth. To Democrats, “voting rights” means stripping away these very safeguards that make our elections fair and free and cementing the chaos of the 2020 election into law. If you disagree with Democrats on voting legislation, you’re derided as “racist,” an advocate of “Jim Crow 2.0.”

I wonder: Do any of the Texas Democrats protesting the Texas election integrity bill, H.B.3, know that the legislation actually expands voting access by extending early voting hours and increasing protections for people who take time off from work to vote? Probably not, since they are too busy embarrassing themselves via a farcical and incredibly irresponsible PR stunt in the name of fighting “racism.”

But I guess that makes sense, considering Democrats have their own strange understanding of what it means to fight racism and hate in our country. To most, fighting racism means treating people with dignity regardless of skin color and heritage. For Democrats, fighting racism means promulgating as fact the wildy pernicious and contentious theory that racism is “ordinary and prevades everything” and that, regardless of good intent, “racism against non-white people in any situation is always possible and rarely, if ever, falsifiable because it does not have to be intentional or conscious.”

This is what Democrats are advocating to be taught in our schools. They want to train kids to find and call out “racism all the time, in every person and every situation, even when it is not readily apparent …” They want white children to grow up thinking that they will forever be innately racist. They want non-white children to become stuck in a victim mentality and think that their skin color is a consequential factor in every single interaction, interview, or life accomplishment. At first, leftists lied and claimed that CRT wasn’t being taught in K-12 schools. Now they are simply coming up with other names for it.

Their understanding of court packing is another term that Democrats refuse to clarify. Traditionally, it would mean expanding the size of the courts when your party is in power as opposed to simply filling vacancies that exist. Democrats are actively trying to pack the courts now — with the president having commissioned a committee to “study” and make possible changes to SCOTUS and Democrat lawmakers having introduced legislation to add four more justices — but refuse to admit that what they are doing is a court packing power grab. Could they please then explain their definition of court packing if what they are doing isn’t it?

Democrats also seem to have written off the meaning of “bipartisanship.” Whereas it would typically mean that both parties voted to pass a law, now Democrats use it to imply that a couple of Republican voters might be on board with it.

Why can’t Democrats just say what they mean and mean what they say?

The reason why Democrats keep their language ambiguous is so that they don’t have to define their terms. Democrats deconstruct, complicate and warp language to suit their needs because normal Americans would never be on board with their crazy objectives otherwise. Plus, if Democrats never clearly and coherently define their terms, then they will never have to defend them.

Equivocation is Democrats’ biggest sin. If Americans do not know what elected lawmakers are talking about, then those lawmakers have failed the very people they were elected to serve. Remember: If something is everything, then it is nothing at all.

If Democrats don’t have a dictionary, then maybe they should make one. It’s about time we demand that Democrats define their terms. We might be shocked at what we find.