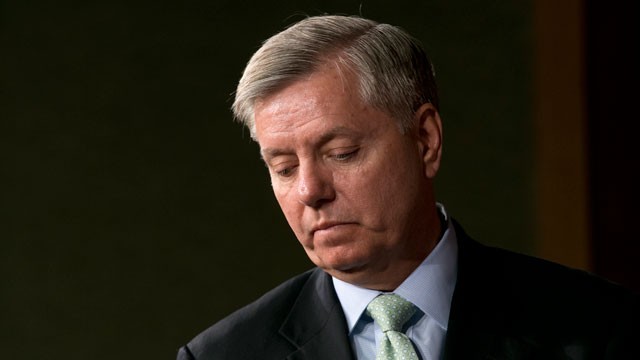 1. Graham Voted for the No Child Left Behind Act

Senator Lindsey Graham (R-SC) cosponsored and voted for the federal takeover of K-12 education known as the No Child Left Behind Act of 2001. This unconstitutional law takes away local control of schools by requiring states to implement federal standards and tests. No Child Left Behind has undermined the quality of U.S. education and costs taxpayers about $25 billion annually.

2. Graham Voted for the Patriot Act

Senator Graham voted for the Uniting and Strengthening America by Providing Appropriate Tools Required to Intercept and Obstruct Terrorism (PATRIOT) Act. Despite the seemingly well-intended title, the so-called Patriot Act violates our Fourth Amendment right to privacy. The law includes unprecedented surveillance powers that permit the federal government to spy on U.S. citizens without a warrant.

Senator Graham voted for the $700 billion bailout of Wall Street. Taxpayers should have never been forced to pay for the mistakes of the big banks. He continues to make excuses for why he voted for the massive bank bailout. According to Graham, “I think TARP was necessary because the whole economy was going to collapse and Bernanke, Paulson, and everybody that I know and quite frankly trust, after Lehman brothers went down, that if we had not involved ourselves quickly you’d have a financial meltdown.”

The fiscal cliff was a fake crisis created by Congress and President Obama. Senator Graham voted for the infamous New Year’s Day 2013 fiscal cliff deal that raised taxes on 77 percent of U.S. households and contained no real spending cuts.

Senator Graham co-sponsored the Cap and Trade bill in Congress with Senators Joe Lieberman and John Kerry. The bill aimed to reduce greenhouse gas emissions 17 percent by 2020, and 80 percent by 2050. In a New York Times op-ed co-written with John Kerry, Graham wrote, “first, we agree that climate change is real and threatens our economy and national security. That is why we are advocating aggressive reductions in our emissions of the carbon gases that cause climate change.”

Senator Graham cosponsored the Protect Intellectual Property Act (PIPA) that would have stifled free speech and innovation online. Under PIPA, the government would have the power to shut down millions of websites. This is a destructive violation of our constitutional right to free speech.

Senator Graham voted to confirm Elena Kagan and Sonia Sotomayor to the Supreme Court. During Kagan’s confirmation hearing, she was unable to answer whether a law requiring Americans to eat vegetables was constitutional. Both Kagan and Sotomayor joined the 5-4 majority opinion to uphold the “constitutionality” of the individual mandate in ObamaCare.

It all boils down to this. Lindsay Graham is nothing but a Total RINO. He needs to GOOOO

Graham is nothing but a tool for the liberal establishment. He was actually caught plotting with Kerry & the Obama administration to lobby Boehner & Republicans!! It's time we Fire Graham and replace him with a real conservative!!

Luckily we have a great challenger, Lee Bright. State Sen Bright has a solid 100% voting record; he has proven he is willing to stand up to big government establishment in both parties. We need him in DC to join Ted Cruz, Rand Paul, and others to fight the liberal agenda!! www.BrightForSenate.com