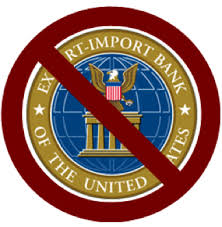 1. It Has Outlived Its Purpose The Ex-Im Bank was founded 80 years ago by FDR to promote U.S. manufacturing during the Great Depression. Meanwhile, in the 2010s, U.S. exports have been setting record highs – they don’t need government help.

2. It Lets Government Pick Winners and Losers Although Ex-Im claims to pick its recipients in a neutral manner, the reality is that political pressures strongly affect who receives its financial backing. For example, in 2009 the Obama administration gave Ex-Im a “green energy” quota for a portion of its loans.

3. Its Risky Loans Put it in Danger of Needing Taxpayer Bailouts The Ex-Im Bank’s purpose is specifically to promote exports by guaranteeing companies loans that are not in competition with the free market. But if these companies can’t get loans on the free market, that means that they are inherently riskier than private lenders are willing to accept, with taxpayers on the hook if they fail. Ex-Im already needed a bailout once, in 1987, and with a history of making loans to companies like Solyndra it could happen again.

5. Most of Its Funding Goes to Big Corporations Who Don’t Need the Money An examination of Ex-Im’s books show that a large majority of Ex-Im’s financial backing goes to a small handful of multinational corporations (Boeing, General Electric, Caterpillar, Bechtel, etc.). These companies are massively profitable and certainly don’t need help from taxpayers to export their goods.

6. It Lets Foreign Corporations Undercut U.S. Competitors What people see with Ex-Im is the exports that get subsidized and sold overseas. What they don’t see is how foreign corporations can use those cheaper goods them to undercut their U.S. competitors.

7. It Only Benefits a Few States, but Every State Bears the Costs Just as the Ex-Im Bank only benefits a tiny fraction of the nation’s total exports, fewer than ten states have any significant amount of their imports subsidized by Ex-Im. Yet the citizens of every state must bear the costs.

8. It Is Prone to Corruption Whenever you involve the government in handing out money, there’s a strong possibility corruption will ensue. Sure enough, several Ex-Im Bank officials are under investigation for allegedly taking kickbacks in exchange for steering loans to certain companies.

9. There Are Better Ways to Help U.S. Manufacturers If the government wants to see U.S. jobs and exports skyrocket, it should lower and simplify the tax and regulatory burden U.S. companies face. Our corporate taxes are the highest in the developed world, which makes our businesses uncompetitive in a global economy.

10. It Is Unnecessary Based on all of the above criteria, the Export Import Bank of the United States cannot justify its continued existence. It’s also one of the easiest programs to retire, as its authorization expires in September 2014 if Congress simply does nothing.