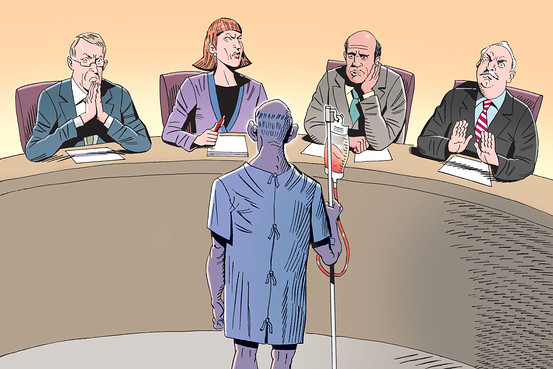 Click here to see a PDF version of this report.

The Independent Payment Advisory Board (IPAB) was created in President Obama’s health care law to help cut $500 billion out of Medicare over 10 years. The only tool it can use for this purpose is formulaic cuts to reimbursements for doctors and hospitals. The panel is barred from implementing or even proposing real reforms that would change how Medicare works. Medicare reimbursement rates are already low. Cutting them further will of necessity force many providers to stop accepting Medicare patients. For rural and disabled Medicare recipients, this could greatly impede access to care. If IPAB’s cuts are allowed to take effect, it will inevitably lead to rationing and care denials.

IPAB forces health care providers to choose between cutting off access to their patients and eventually going bankrupt. Right after ObamaCare passed, Medicare’s top numbers-cruncher, the Chief Actuary, estimated that IPAB’s 10-years cuts will cause 15 percent of America’s hospitals to go out of business. By the way, none of the IPAB members is allowed to be a practicing physician.

Congress intentionally shielded IPAB from democracy:  IPAB’s decisions carry the force of law unless two-thirds of each house of Congress votes to overrule the decision. With Congress in perpetual gridlock, there’s little chance of that. And IPAB decisions are not permitted to be reviewed by any court.  Additionally, if the President fails to nominate, or Congress fails to confirm, all 15 IPAB nominees, then a rump IPAB with few members (or just one), or even the HHS Secretary acting alone, can still impose the Medicare cuts unilaterally.

IPAB has been given too much power. Fifteen unelected bureaucrats appointed by the president can make major decisions which will affect tens of millions of Medicare recipients. Without oversight from our elected representatives, the panel is unaccountable and uncontrollable.

In creating IPAB, Congress in effect passed the buck to an executive branch agency. Congress should be making the tough decisions on Medicare, not the unelected, undemocratic, unaccountable IPAB.

Congress exempted IPAB from the “sunshine” laws that apply to virtually every other board and commission. The board doesn’t have to hold public meetings or hearings, consider public input on its proposals, or even make transcripts of its deliberations available to the public.

7.) IPAB is prone to corruption

ObamaCare provides that IPAB “may accept, use, and dispose of gifts or donations of services or property.” This is a not-so-subtle invitation for health-industry lobbyists to lavish board members with favors and goodies in hopes of influencing their decisions.

IPAB’s annual operating budget has been put on auto-pilot, with a direct tap on the Medicare trust funds. This means it won’t have to undergo the yearly congressional budgetary review that applies to almost all other agencies. Instead, its funding will come directly out of the trust funds used to pay Medicare beneficiaries’ health care claims. Incidentally, employment at IPAB will be pretty cushy. Salaries for 2012 will be $165,300 for the board’s members, $179,700 for its chairman, and up to $145,700 per employee. Plus, taxpayers will cover all work-related travel and stipends.

The reimbursement rates paid by TRICARE, which is the health care program for Uniformed Service members, retirees and their families worldwide, are tied to those of Medicare. So IPAB’s reimbursement rate cuts to Medicare physicians and hospitals will also negatively affect TRICARE participants. This will make it more difficult for some veterans and active-duty personnel to access health care.

IPAB is a “constitutional trifecta”: an executive agency wielding legislative power immune to judicial oversight. In effect, it is the sole judge of the laws that it creates and executes. Such a concentration of power would be reprehensible to the Founders. As James Madison argued in The Federalist, “The accumulation of all powers, legislative, executive, and judiciary, in the same hands . . . may justly be pronounced the very definition of tyranny.”

You don’t have to call it a “death panel” to know it’s immoral.