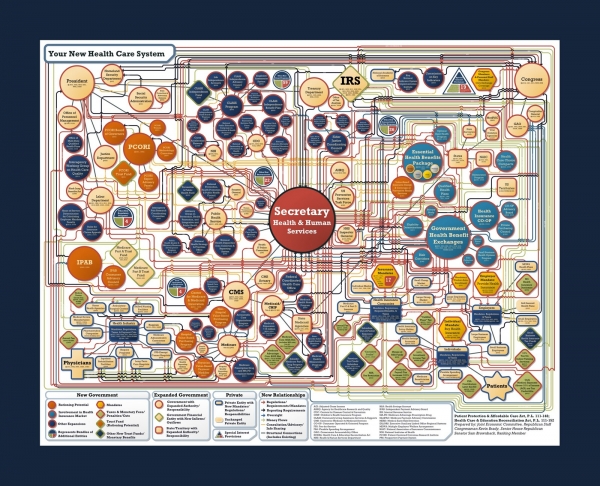 In this morning's Washington Post, economist Robert J. Samuelson notes that even as campaign 2012 enters its final fortnight, the wheels of President Obama's bureaucracy are turning furiously to implement the president's controversial health care law.

The IRS, Samuelson notes, has "issued an 18-page, single-spaced notice explaining how to distinguish between full-time and part-time workers under" ObamaCare. Samuelson pulls a typical quote from the mind-numbing regulation:

This notice expands the safe harbor method described in a previous notice to provide employers the option to use a look-back measurement period of up to 12 months to determine whether new variable hour employees or seasonal employees are full-time employees, without being subject to a payment under section 4980H for this period with respect to those employees.

Obamacare’s relentless march to full-fledged introduction in 2014 demonstrates that, for all its good intentions, it will make the health-care system more confusing, costly and contentious. It won’t control health spending — the system’s main problem — and will weaken job creation.

ObamaCare dominated the 2010 elections, and arguably remains the most powerful domestic policy issue of this election.

We're now two full years into the "implementation phase" of the government takeover of health care. During that time, the case for full repeal has only gotten stronger.

For more information, check our the full document.

Dean Clancy is FreedomWorks' Legislative Counsel and Vice President, Health Care Policy. He leads our efforts to reverse the government takeover of health care and adopt a patient-centered approach. 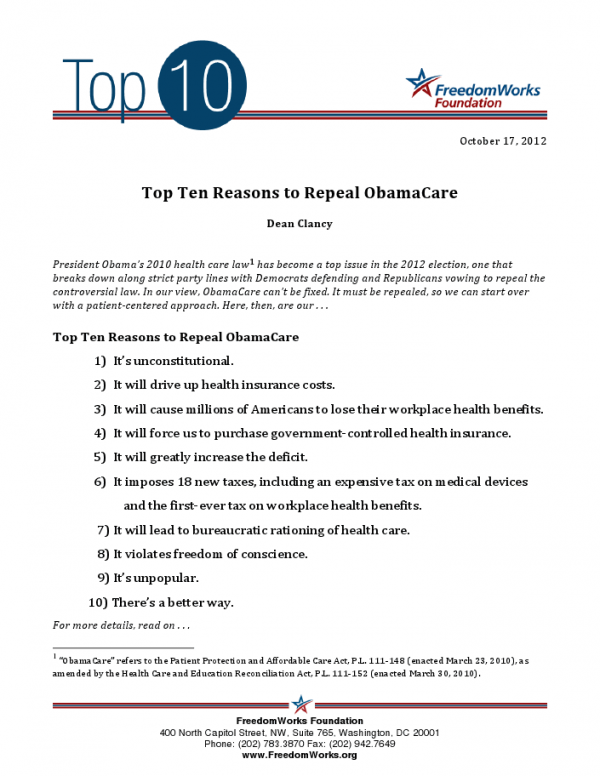 Ben Domenech: The Media's 'Republicans Have No Obamacare Replacement' Myth

FreedomWorks Live: The "How to Beat ObamaCare" Series

Health Reform in One Lesson

ObamaCare in One Image

There should also be exposure for new taxes that are built into the law including 3% of a home sale going to the government after January of 2013. Waiting for an RNC or Romney PAC ad stating this emphatically.