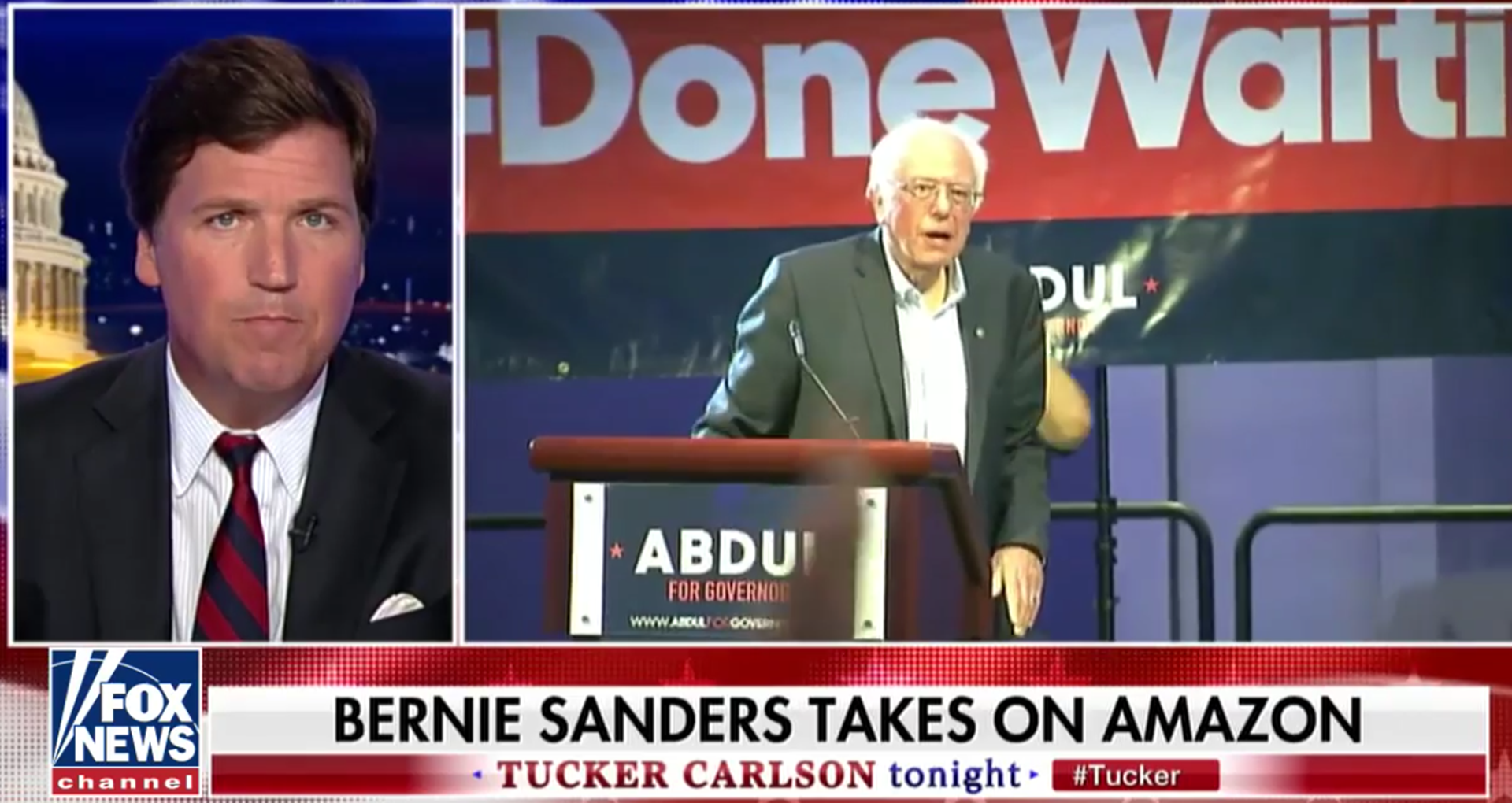 Last week, Tucker Carlson, host of Tucker Carlson Tonight on the Fox News Channel, attacked Amazon founder and CEO Jeff Bezos. Carlson’s indictment is that Bezos, currently the richest man in the world, does not pay his employees enough because many Amazon employees qualify for various government welfare benefits, such as food stamps. Carlson additionally condemned the Walton family of the retail giant Wal-Mart, who have historically been the focus of this kind of attack. Then and now, there are several fundamental problems with this line of argument.

Right off the bat, there are two glaring issues. First is Carlson’s juxtaposition of the net-worth of Bezos and the Waltons, $150 billion and $175 billion respectively, against the wages of their low-skilled employees. There is no denying both Bezos and the Waltons are extremely wealthy people, yet the wealth of Bezos and the Waltons is tied almost entirely to value of the stock of their companies. Stock prices are subject to the confidence of investors and thus their value can be wiped out in an instant. Just ask Facebook CEO Mark Zuckerberg, whose net-worth recently plummeted nearly $16 billion in a day.

The other blatant problem with Carlson’s contention is the misplaced blame. Wal-Mart was founded in 1962. Amazon was founded in 1994. Food stamps were made national in 1964, Medicaid was passed in 1965, and federal housing assistance dates to the Great Depression. These programs, along with countless other state and federal interventions, have created all sorts of distortions. Subsidization has progressively made food, medicine, and housing more expensive, eroding the purchasing power of wages. In addition, the presence of these programs effectively subsidizes lower wages. With taxpayers footing the bill for these essential costs of living, workers are undoubtedly willing to accept lower pay. In fact, the structure of many of these assistance programs can discourage workers from seeking out higher pay at the risk of losing their benefits. Yet Carlson misleading lays blame solely and squarely at the foot of the private sector.

A larger and more nuanced problem with Carlson’s argument is the failure to recognize how wages function. Amazon and Wal-Mart could certainly afford to pay some employees more, but the question is why they pay them at the rate they do now. Quite simply, wages are prices. Consider a store selling an item. For a sale to occur, both the store and the customer must benefit and perceive that the value they are receiving from the transaction is maximized. The same is true for hiring labor. The worker is selling their time and services and the employer is the customer. If workers demand wages that are too high, ultimately their wages will be zero as they will not be employed. If employers pay workers more than the value they generate, they will go out of business. In either case, the workers of Amazon and Wal-Mart currently earning the wages to which Carlson objects would be much worse off.

The ability of workers to generate more value than they are paid in wages is particularly important to highlight in the context of Carlson’s argument. For what purpose would any business spend, for example, $10 per hour to ultimately only receive $9? Some workers are undoubtedly paid more than the value they generate in any given time frame, and some workers might be paid more than they create now because employers are making an investment. Yet in the long run, as with any investment or expenditure, the business necessarily expects to receive a benefit greater than the value of the investment. Why should Bezos and the Waltons be expected to lose money—because they have ability to do it for longer than most? How long should they be expected to do this?

Speaking of competition, Carlson also makes the claim that Amazon and Wal-Mart “operate as monopolies.” In this sense, he is suggesting that Amazon and Wal-Mart don’t even have to compete with the smaller firms for available labor and therefore are free to pay workers the lowest wage allowable under law. He mentions the ride-sharing firm Uber as well. However, the workers at Amazon and Wal-Mart and the Uber drivers he refers to are generally all unskilled workers. This means there is less friction facing these workers when switching between various firms and industries. For example, while medical doctors command a very high salary, it would be quite difficult for them to command similar pay in equally skilled and specialized fields, such as architecture or law. Yet an unskilled worker at Wal-Mart could easily transition to be an Uber driver. This all goes without mentioning the fact that two of the three firms, Amazon and Wal-Mart, named in Carlson’s argument about these supposed “monopolies” are quite literally direct competitors with one-another.

For all the problems listed above, what’s most disappointing about the argument is its source. Carlson knows better. Indeed, in the same monologue, he made a few observations that are entirely accurate. He correctly asserts that the labor market is far from a free market and that corporations of all stripes routinely use the power of “government regulation to crush competition.” However, his embrace of populist fallacies regarding wages is highly regrettable and a significant disservice to the cause of free markets he claims to champion.

Great trying to bring each other down in the name of caring for the low skilled, poorly paid staff. But we all have the things we consider to be a lesser evil. Bryan | Activist | http://www.grcatholiccentral.org/about/school-board/school-board-members