On Friday, the Labor Department will release the last monthly jobs report before the midterm elections. Economists have already predicted that it won’t bring good news for the US economy. According to 62 economists surveyed by Bloomberg news,

If their predictions are accurate, this will be the longest span of elevated joblessness since monthly records began in 1948. Recently, the National Bureau of Economic Recovery (NBER) announced that the numbers show that the recession was over in June 2009:

In determining that a trough occurred in June 2009, the committee did not conclude that economic conditions since that month have been favorable or that the economy has returned to operating at normal capacity. Rather, the committee determined only that the recession ended and a recovery began in that month.

However, the mild “recovery” last summer only occurred since the federal government artificially increased GDP by moving borrowed money into those quarters. As we’ve seen, it was impossible to sustain the “recovery” since money was borrowed from another place and time. Sooner or later, the artificial GDP growth had to subside.

the amount of unemployment we’ve already got and the slowness of recovery lead to predictions that we could have 9-plus percent unemployment even through the next presidential election.

Since June 2009, the economy has lost more jobs than it has gained. A New York Times chart shows that job growth has stagnated in the past 15 months: 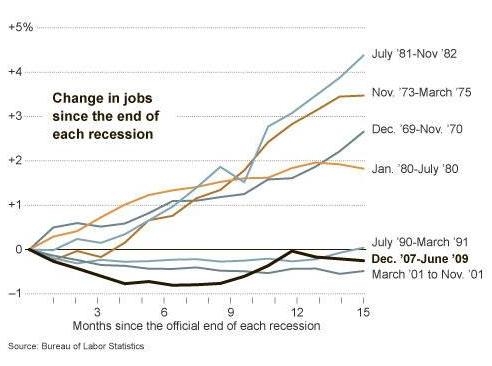 what’s really unique about this recession is the amount of unemployment in combination with the slowness of the recovery. That’s just not happened before. We had a sharp recession followed by a sharp recovery in the 1980s.

In the 1980’s, the economy quickly recovered due to President Reagan’s plan which cut taxes by 25 percent over three years. In the midst of the recession, Reagan stated in 1981:

This is the time for a new beginning. I ask you now to put aside any feelings of frustration or helplessness about our political institutions and join me in this dramatic but responsible plan to reduce the enormous burden of federal taxation on you and your family.

The Washington Times chart below shows the economic recovery directly related to these tax cuts: 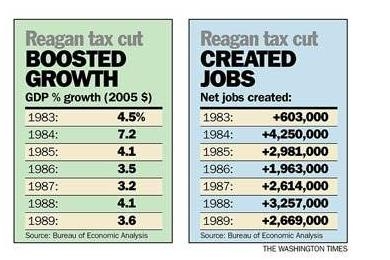 As shown in the chart, the Reagan tax cuts boosted GDP and job growth for many years to come. It’s no wonder that the economy has yet to have a lasting recovery from the current recession. To the contrary, the Obama administration plans to do the opposite by significantly raising taxes on families and small businesses on January 1st. The uncertainty over the looming tax hikes has affected businesses decision to hire new employees. The highly-anticipated September jobs report is likely to be even more proof that Obama’s “stimulus” packages cannot bring sustainable economy recovery.