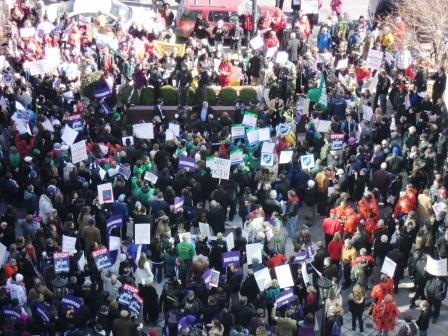 A veritable who's who of public and private sector unions including AFSCME, NEA, SEIU, AFT, ATU, and the Teamsters descended on the FreedomWorks office building on Wednesday to block state reforms aimed to curb their exorbitant union power in Wisconsin, Pennsylvania, Indiana, Tennessee and Ohio.

Interested only in perpetuating reckless spending and bloated state budgets, these unions are determined to protect their cozy relationship with big government while leaving the taxpayers to foot the bill. States facing billions of dollars in debt cannot afford union payoffs any more.

Faced with billions of dollars in debt, responsible Governors and state legislators are taking a stand against public sector unions. We need YOUR help now to support our effort to “Save Our States”.

In Indiana, Governor Mitch Daniels is focusing on SB575, a bill to end collective bargaining for public school teachers’ unions. Send your letter of support NOW!

In Wisconsin, Governor Scott Walker is trying to pass his Budget Repair bill which asks public employees to pay modestly into their health and retirement benefits while ending collective bargaining. Send your letter of support NOW!

In Pennsylvania, Sen. Piccola and Sen. Williams are pushing for SB1, the Opportunity Scholarship and Educational Improvement Tax Credit Act, to allow parents to take their children out of failing schools and enroll them in another public, charter or private schools. This bill will vastly reduce the monopoly power of the teachers’ unions in Pennsylvania. Send your letter of support NOW!

Reforming compensation and benefits while ending collective bargaining are all vital ways we can rein in state and local employees from continuing to outpace the private sector while paying little or nothing into their own benefit packages. We NEED reform, please donate to help us fight back against these unions!

Does Detroit Deserve Another Bailout?

It’s not really a secret that Detroit isn’t doing well.

Letter of Support for the Employee Rights Act, H.R. 3485

As one of our millions of FreedomWorks members nationwide, I urge you to contact your Representative today and urge him or her to support H.R. 3485, the “Employee Rights Act.” Introduced by Congressman Tom Price (R-GA), this bill would enable American workers to freely exercise their rights in the workplace by maintaining the right to a secret ballot, allowing workers to see their paychecks used as they intend, and making union membership the free choice of an individual employee rather than a mandate.

Ted Cruz and the American Team

Senator Ted Cruz took to the floor of the US Senate yesterday just shortly after 2:30pm ET. His primary goals were to highlight the failures of ObamaCare, reading examples from real people all over America and talk about the importance of removing the funding for Obamacare. Senator Cruz spoke about the effect Obamacare on the American Dream -- and that people scared of standing up for their beliefs should remember how much more difficult things can be if they don't.

Personal Freedom and Prosperity 110: The Rule of Law Atop the confederation of executive agencies sits the Chief Executive and his immediate staff, who have been the greatest beneficiaries of the new technologies of government. The president (or prime minister) monitors and directs the activities of hundreds of agencies in real-time from a single locus of authority.

Union Thugs Spit On Speakers, Get Arrested At Right To Work Event In Washington

On Thursday, September 5, an evening seminar was held in Vancouver, Washington to discuss Right to Work legislation and how it could benefit the states of Washington and Oregon. The seminar, co-hosted by the Freedom Foundation of Olympia and the Cascade Policy Institute, featured Vincent Vernuccio of the Mackinac Center and Harry Beck of the Supreme Court Case, Beck v CWA. Participants paid $10 each to hear how Michigan beat the odds to enact Right to Work legislation and how it's changed the state.

The Obamacare Comedy of Errors

The slow motion train wreck of Obamacare is picking up speed.Every few days, there’s another ugly story highlighting conservatives’ warnings about the unpopular boondoggle. Friday brought two more shockers that would cause the President deep embarrassment were he capable of it.The scandal-plagued IRS was chosen as the enforcement arm of Obamacare, so you think they would love their latest excuse to dig into Americans personal records and bully accordingly. But their highly partisan union has launched a letter-writing campaign to get out of its onerous requirements.

Motor City Residents Have Unions to Blame for Bankruptcy

Detroit has gone belly up. The Motor City declared bankruptcy last week setting the stage for a contentious battle to right the city's sinking ship. At more than $18 billion in debt, the city now must find a way to satisfy their creditors and cut costs so basic services like ambulance, fire and police protection can come back online.