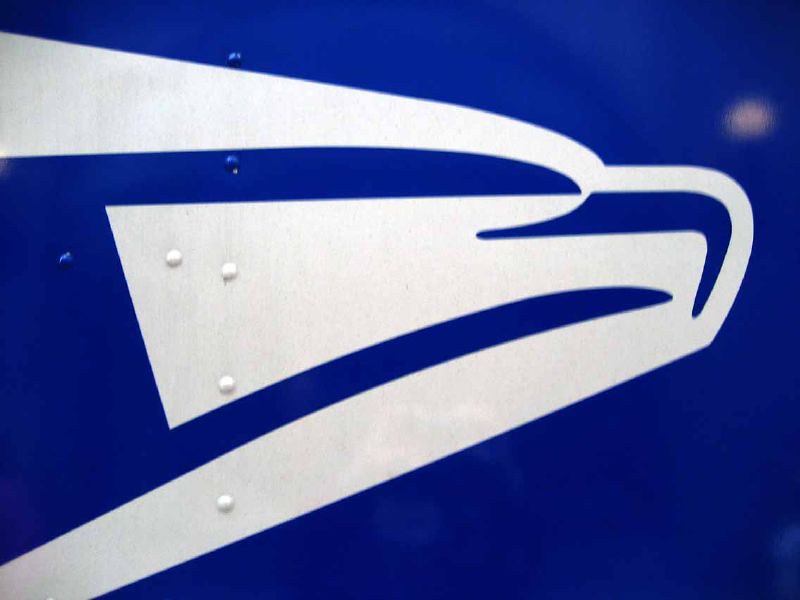 It’s almost a certainty that there will be an increase in mail-in voting in the 2020 presidential election because of COVID-19. This has prompted the USPS to send letters to states warning that the laws of 46 states are “incompatible” with the agency’s “delivery standards.” This is a problem created by state election law, not the USPS nor the federal government. In fact, the USPS prioritizes mail related to elections. As the Washington Post recently noted, “[P]ostal workers have long informally treated election mail — including voter registration materials, voter information and ballots — as first-class items, affording them privileges their 20-cent price point ordinarily would not allow.” This will not change.

Although there is no evidence that the USPS is involved in any election shenanigans, the changes at the USPS and the letters to states have given congressional Democrats a line of attack against President Trump and against their Republican counterparts.

Section 6001 of the Coronavirus Aid, Relief, and Economic Security (CARES) Act did increase the USPS borrowing authority by $10 billion, providing access to capital from the Department of the Treasury. An agreement on the terms of the loan was only recently reached. This loan, however, “merely postpones the impending liquidity crisis and the borrowings must be repaid in a period where cash shortages are forecasted,” according to the USPS’s statement on its most recent quarterly financial statement. The USPS isn’t going to run out of funding before the election, considering its own financial statement notes that it has “sufficient liquidity to continue operating through at least August 2021.”

Congressional Democrats are, once again, trying to capitalize on a crisis. Rather than make tough choices and overhaul the USPS, Democrats wanted to bail out the USPS to the tune of $25 billion in the HEROES Act, while also imposing a slew of federal mandates on how states conduct federal elections.

The USPS doesn’t need a bailout. What it needs is to change its business model. A report released in May by the Government Accountability Office (GAO) noted that as of FY 2019, the USPS had $161 billion in unfunded liabilities and debt and floated some ideas that Congress should consider to address these growing financial woes. 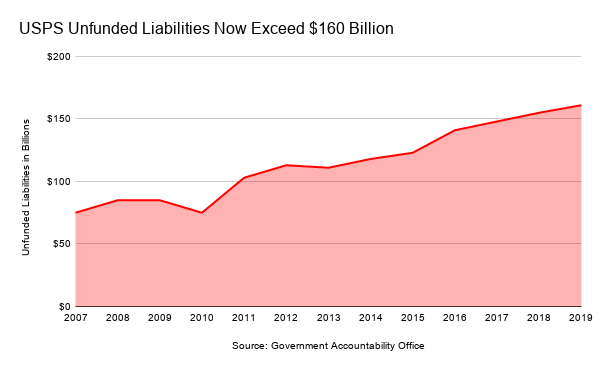 “Regarding USPS, reassessing its business model should start with the level of required postal services,” the GAO explained. “For example, delivery is USPS’s most costly operation; USPS officials estimate annual savings of $1.4 billion to $1.8 billion if delivery of mail were reduced to 5 days rather than 6 days per week.”

Reducing the number of days that the USPS delivers mail has been floated before, but congressional Democrats and labor unions, including the National Association of Letter Carriers and the National Rural Letter Carriers’ Association, pushed back even when President Obama proposed reforms. It should come as no surprise that labor unions are a barrier to any USPS reform.

“Second, USPS is to function as a financially self-sustaining entity; however, it does not. A reassessment could include determining whether some of USPS’s costs and liabilities should be borne by taxpayers,” the report continued. “Third, alternative institutional structures for USPS range from a federal agency to a private company. A bankruptcy proceeding is not an effective or appropriate means to address the issues associated with a potential USPS restructuring, according to the National Bankruptcy Conference.”

Mail volume has rapidly declined, peaking in 2006 at 213.1 billion pieces. Digital communications such as email and text messages and online payment systems have displaced traditional mail. 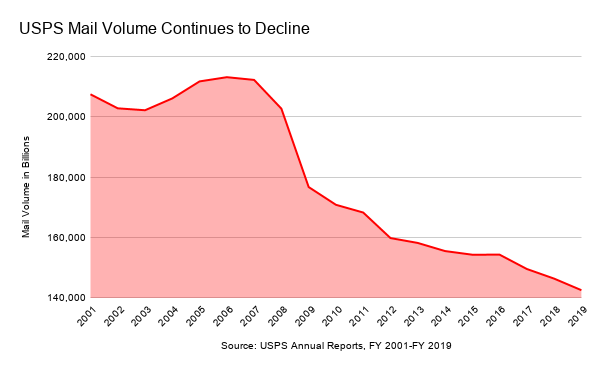 The existing problems in the USPS have been made worse by COVID-19. Mail volume is down in FY 2020 and losses are expected to be even higher than last year. In fact, the USPS hasn’t made money since 2006. 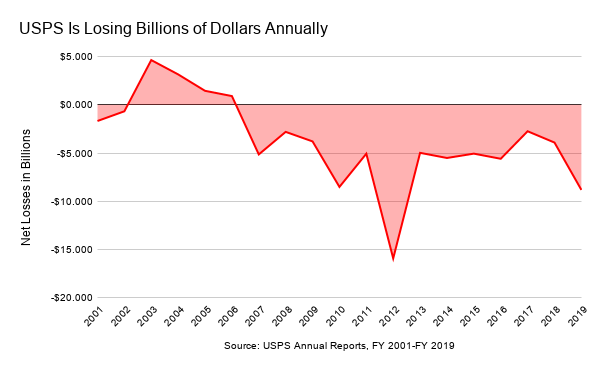 And the USPS annual operating deficit was nearly $75 billion at the end of FY 2019. 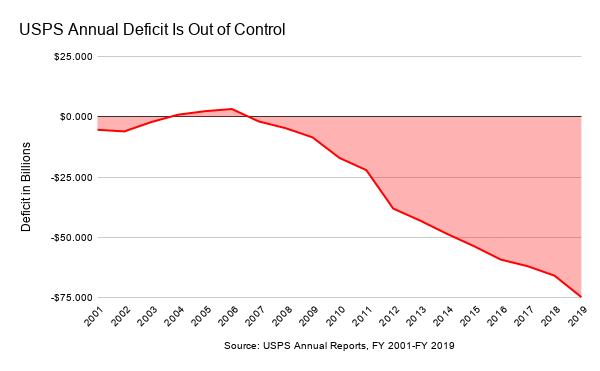 Some blame Congress for the USPS’s problems. In 2006, Congress passed the Postal Accountability and Enhancement Act, which required the USPS to fund retiree health benefits in advance. Prior to this, the USPS had a pay-as-you-go system. Congress actually specified the annual payment, found in 5 U.S.C. 8909a(d)(3), for fiscal years 2007 through 2016 and established a formula to determine the annual payment for FY 2017 and after.

Some of the recent changes at the USPS may have come at a bad time considering the looming presidential election and near-certain increase in mail-in balloting, but the truth is that the USPS has long-standing financial issues and is in a cash crunch. The loan from the federal government has only delayed the inevitable.

Throwing money at the USPS appears to be what Democrats, as well as some Republicans, are ready to do. The USPS needs to be overhauled, if not completely privatized.