Using the Congressional Review Act (CRA), the U.S. Senate has an up-coming vote in June to overturn the EPA’s economically dangerous Utility MACT Rule. The Utility MACT rule is estimated to cost over $10 billion annually while only providing $500,000 to $6 million in benefits related to mercury. The EPA is unable to quantify or value the health benefits of the other air toxics regulated by Utility MACT.

While not only a huge waste of tax payer money, Utility MACT will cause the loss of thousands or even millions of American jobs. According to the National Economic Research Associates, Utility MACT will cost 180,000 to 215,000 jobs by 2015. With other EPA regulations, the economy stands to lose approximately 1.65 million jobs by 2020.

How does Utility MACT cause the loss of American jobs? Well, based on the new EPA regulations under the Utility MACT rule, new power plants are restricted to emit no more than 1,000 pounds of carbon dioxide per megawatt hour of electricity produced. The average U.S. coal-fired plants emit around 1,800 pounds of CO2 per megawatt hour. Power companies and equipment vendors have confirmed that the rule’s standards for new sources are so stringent no new coal-fired power plants will be built in the United States, costing thousands of American jobs.

The Utility MACT rule will also cause coal-fired power plants to be less productive, driving up the cost of electricity for the everyday American. EPA’s new rules on electric utilities have been projected to cost ratepayers nearly $21 billion a year, driving up electricity rates 6.5 percent on average. These projections are coming to fruition. For example, in their May 2012 Capacity Auction, PJM reported two-year capacity price increases of 390 percent, most of which they attributed to the cost of environmental compliance, with a nearly 1200 percent spike in northern Ohio. This could cause electricity bills across the PJM region to increase by at least $130-and up to $400 in northern Ohio-and does not even factor in any changes in the actual cost of generation.

Utility MACT not only increases costs and reduces production in the coal industry, but in other industries outside the coal market as well. A Maguire Energy Institute study estimated that EPA’s air rules could endanger a million manufacturing jobs outside of the coal and utility industries. These include jobs in coal mines that are facing closure due to reduced demand, as well as jobs in the railroads for which coal is the single largest commodity carried.

What can be done to stop the Utility MACT?  Support S.J Res. 37 introduced by Sen. Jim Inhofe! Sen. Jim Inhofe, recognizing the tragic affects that Utility MACT will have on our economy, introduced this resolution of disapproval under the Congressional Review Act (CRA). If passed, this resolution would overturn the EPA’s aggressive and costly regulation. Under the CRA, slow procedural hurdles are eliminated and the resolution of disapproval can pass the Senate with a simple majority.  Call your Senator right now and ask them to support S.J Res. 37 in order to save precious taxpayer money, American jobs, and our economy. 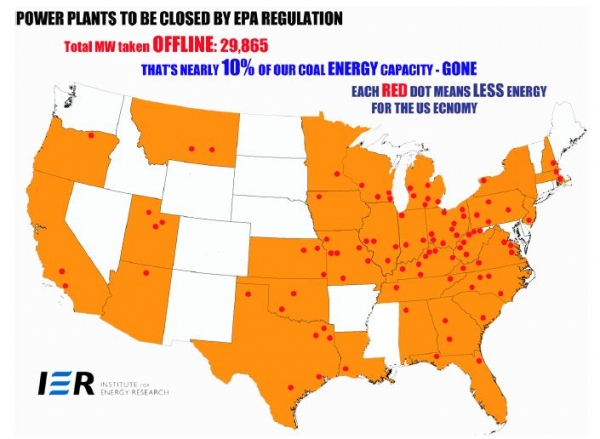 "Well, based on the new EPA regulations under the Utility MACT rule, new power plants are restricted to emit no more than 1,000 pounds of carbon dioxide per megawatt hour of electricity produced. The average U.S. coal-fired plants emit around 1,800 pounds of CO2 per megawatt hour. Power companies and equipment vendors have confirmed that the rule’s standards for new sources are so stringent no new coal-fired power plants will be built in the United States, costing thousands of American jobs."

Here, you are conflating Utility MACT and the carbon dioxide NSPS, which should be corrected.

Estimates = Candles! You light a candle to see, then the government lights the same candle and the smoke blinds you!

I have a friend that is upset that the Zion Nuclear Plant was closed is being destroyed. He has been around the world thirty times, stood on the deck of Nuclear Submarines and his opinion is that Zion need not be closed. Exelon would rather use Natural Gas and Coal! Both of which will run out, not tomorrow, but both are burned and cannot be renewed. Coal faster, because now we are shipping it to what used to be our enemy, although I don't believe that "used to be" is relative from the stories being played out everyday.

The best method of arguing against a policy measure is to use its strong points and turn them into weak points. According to the EPA's website, this measure is meant to 'protect American families from power plant emissions of mercury and toxic air pollution like arsenic, acid gas, nickel, selenium, and cyanide.' Additionally, 'the standards will slash emissions of these dangerous pollutants by relying on widely available, proven pollution controls that are already in use at more than half of the nation’s coal-fired power plants.' Tell me what is wrong with that and I will be convinced of your argument.

And regarding your argument, it's an interesting one. I'm sure that we can agree that estimations can often been inaccurate. So I am weary of the estimation regarding the cost of this measure. That being said, feel free to be weary of this estimation as well. According to a study done by the Center for American Progress, "Slashing mercury and other contaminants will save 11,000 lives annually and prevent more than 100,000 asthma and heart attacks year. These health improvements will provide economic benefits of up to $90 billion every year." Yeah, those figures sound a bit suspect to me too. But it's clear that the environmental benefits of this measure have some sort of financial benefit, no? It's just a question of whether the benefit outweighs the cost. And different numbers are telling us different things.

In terms of jobs, we can say the same thing. Yes, some jobs will be lost, and you give us the numbers for that. On the other side of it though, jobs will created because the plants need to hire workers to refurbish their plants to fit the new requirements. Again, will the provision eliminate or increase more jobs? Estimations are out that go both ways.

And just a side note, I'd like to hear the power companies and equipment vendors who are in complete agreement that no new coal-fired plants will be built.

Continuing, I was wondering where you got the 6.5% increase in rates estimate. According to the EPA number that I found, it is around 3.1% by 2015 and 2% by 2020. Again, it looks like we can play these numbers games all day, babe.

And then we go back to jobs again. Again, you're giving me estimates. I can give you estimates that tell a radically different story. Who's right? I don't know.

My main point is that your argument is very one-sided. Throw in some more counter-arguments. Prove to me why the financial implications of the proposal outweigh the environmental benefits, which could actually have financial benefits too! And you'll have me convinced. Until then, I remain skeptical of your claims.

I mean the best kind of research is non-biased research. Just like the best kind of argument is a non-biased argument. If an argument can prove to me with bare facts that it is logical and correct, then it's going to win, hands down. But when you add emotion and bias to something, it weakens a point. For everything that I write, I try and forget that I'm a conservative democrat and attempt to prove my argument on facts alone. It's difficult, but worth attempting.
If you keep arguing in the same style that you've been using, you're going to keep getting support of your base: conservatives. But they aren't the ones that you should be trying to persuade. You should try and persuade people like me; people who aren't 100% behind conservatives or liberals. The short of it is, in my opinion, you should argue like you're trying to get a democrat to agree with you. Like I said, it's difficult. But when you do that, well, you win. Simple as that.

I don't want to sound arrogant, but I'm afraid you don't understand my deeper argument about how the economy and regulation relate. As far as the bias issue goes I understand and respect your point; however, there is no such thing as non-bias research. Everyone is affected by the assumptions and biases they hold. In proving a point I may have sounded biased but it is impossible to argue something and not appear bias.

I mean, you can't just start a sentence saying, 'the fact of the matter is' and then tell me something that isn't proven. While it can probably be successfully argued that this provision restricts production in one sense, it can also be argued that it enhances production elsewhere. And you have to argue the costs and benefits; that's what matters in this situation. Is the bill more costly or more beneficial to the economy? You're claiming that it is more costly, but your evidence isn't provable. And the brief numbers that I put up aren't provable either. What I'm saying is that this isn't an issue that can be written about nonchalantly. In-depth research really needs to be done before any side can be taken. And while I'm sure that you've done plenty of research on the matter, I fear that you knew what you were going to argue before you actually started researching, and this made your research biased. Just go into the issue with a neutral position. That's all I ask.

Travis thanks for your comments. I think you may have simplified my article too much by reducing it to statistics. The fact of the matter is that government regulation into a free market restricts production. Production drives the economy and so whenever production is restricted the economy shrinks and jobs are lost. Utility MACT rule is a $10 billion regulation that restricts production and alters the market. Yes one can argue cost and benefits but this economic truth remains.