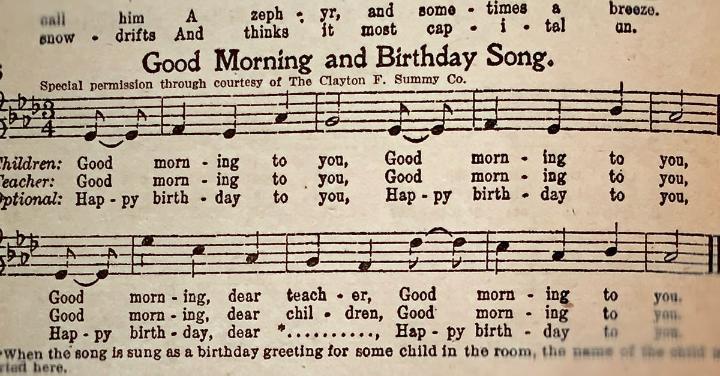 Re:Create, a coalition dedicated to supporting a balanced copyright system, are calling this ruling “a victory for Americans” stating, “This ruling shows how seriously out of balance the U.S. copyright system is. For decades, creators and small businesses have been unjustly forced to pay extraordinary copyright royalties for one of the most widely known songs in the world, which dates from the 1800s.”

In fact, the song’s origins can be traced back to 1893 when a Kentucky schoolteacher, Patty Smith Hill, and her sister created a song to sing to kindergarten students at the beginning of the day. Eventually, “Good Morning to All” would be published in a book titled, “Song Stories for the Kindergarten”, and the publisher, Clayton F. Summy Co. was assigned the copyright from Hill and her sister. The same melody and similar lyrics were then turned into a birthday song titled “Happy Birthday to You”, which was also copyrighted by the same company. In 1988, Warner/Chappell Music bought Summy’s successor, Birch Tree Group, and they began enforcing the copyright that same year. Since those rights were established, it is estimated that this world famous birthday jingle has earned Warner/Chappell a whopping $50 million.

Tuesday’s ruling is an important step in the right direction for a couple of reasons. First, it will most likely lead to a class-action lawsuit that could potentially result in millions of dollars being returned to those who have been unfairly robbed of their money. Second, the ruling will hopefully lay the groundwork for increased discussion surrounding the issue of copyright reform in this country. Thankfully, groups like Re:Create are at the forefront of this vital conversation. “It’s unfortunate that it has taken years of litigation to establish that these royalty demands were baseless,” said Tina Pelkey, their spokeswoman. “Re:Create welcomes the decision, which underscores the need for clear and transparent copyright laws to enable all forms of creativity.”

So, next time you are serenaded with the birthday song and you blow out the candles on your birthday cake, remember to make a wish for copyright reform in this country. Because, an environment that encourages widespread innovation and creativity while discouraging such copyright injustices is the best birthday gift one could ask for.