Early this morning Mitt Romney announced that he has chosen House Budgetary Committee Chairman Paul Ryan as his running mate. 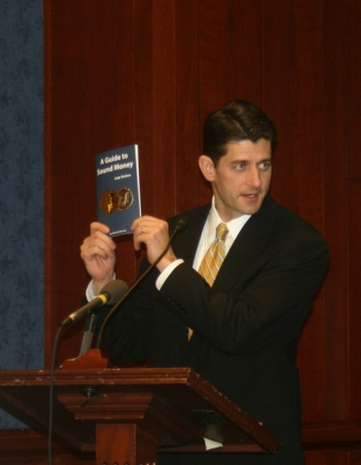 As many in the Tea Party movement have noted previously, Romney needed to choose someone who could articulate the battles that lie ahead for our nation as well as rally the base toward a Romney victory in 2012.

While Ryan has his flaws, as FreedomWorks CEO Matt Kibbe noted, this is a clear sign that the Romney campaign is reaching out to conservatives and the engaged Tea Party grassroots community.

In December 2010, FreedomWorks and the Atlas Forum hosted a Sound Money forum where Congressman Ryan spoke on our fiscal policy and how it is on a collision course with our monetary policy.

"There is nothing more insidious that a government can do to its countrymen than to debase its currency, yet this is in fact what is occuring."

We believe that going forward we will have an ally in Paul Ryan.  He's known as a reformer; someone unafraid to take on the challenges of our unsustainable entitlement growth and our ever expanding federal deficit and national debt.   In the past he has supported a flat tax and understands the need for fundamental tax reform as a pathway to a prosperous nation.

Romney made a great choice in Paul Ryan.  It shows that you, the Tea Party and limited government conservative have made your voices heard.  Now, we must unite around this ticket and continue our efforts to shore up the House, take the Senate and the White House.  Never have we needed the grassroots more. As Matt Kibbe stated earlier today:

If you and I don't show up to defend Paul Ryan, expect our best ideas to lose in the political marketplace.

There is simply too much at stake to allow that to happen.  Will you join us?

If you read the commentary linked to this post, Kibbe has many of the same points.

If you want to defend conservative ideas, you have to vote for some one that actually believes in them.