This evening, the debate we’ve all been waiting for will finally begin.  Not traditionally a debate most Americans focus on, the lone Vice Presidential debate has become more of a focus this year due to the President’s poor performance in the only debate thus far.  The Vice Presidential candidates have been relatively secluded the last week, both working overtime to study for tonight’s debate.

Vice President Joe Biden has been at the Sheraton Hotel in Wilmington, Delaware battling it out with Rep. Chris Van Hollen, D-Maryland, who is standing in for Paul Ryan.  Van Hollen, the ranking Democrat on the House Budget Committee, reportedly referred to Ryan as “extreme” and “uncompromising” in a new ad by the Obama campaign.  A picture released today by CNN shows the lengths the campaign has gone to recreate the scene that will take place tonight, all the way down to the carpeting. 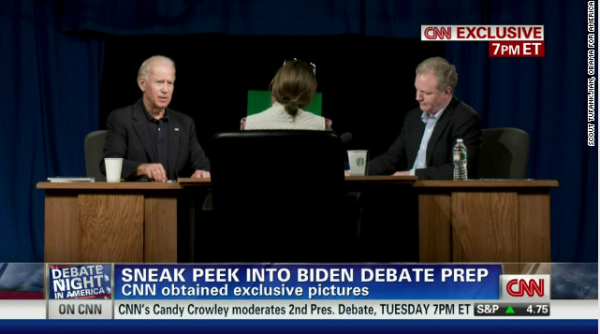 For his part, Paul Ryan has been working double-duty being on the campaign trail with Romney as well as prepping for the debate.  Ted Olson, lawyer and former Solicitor General, has been assisting Ryan playing the role of Biden.  While Ryan has admitted that Biden has extensive experience in the area of debate, he stated that Biden’s “Achilles heel” is that he has President Obama’s record.

Debate topics will cover domestic and foreign policy and will be divided into 9 segments of 10 minutes each.  While domestic issues have been on the forefront of the American public’s minds, the mishandling by the administration of the recent attack in Libya coupled with a growing anti-American sentiment worldwide may be a topic that will come into prominence this evening.  Biden is considered an expert in foreign policy, however, the Libyan issue may not be one he’ll want to discuss.  Additionally his favorability rating is only at 39%, meaning Biden isn’t currently in a good position with the public to win them over for Obama.

The debate will air at 9pm ET and will be moderated by senior foreign affairs correspondent for ABC News, Martha Raddatz.