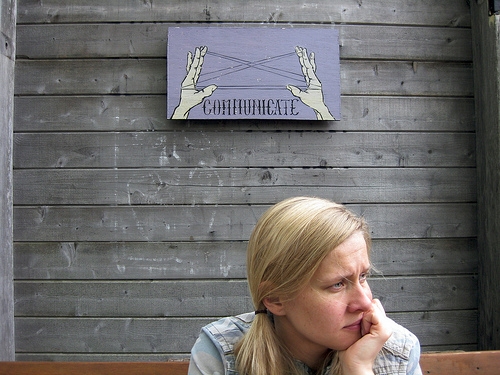 Imagine a press conference; any one will do. Behind the bank of microphones stands Generic Q. Politician, who spends 30 solid minutes filling your ears with bureaucratic jargon and political mush. When he's done, you don't know any more about the issue he spoke about than you did when he started, but you're certain of his position. Maybe. Depending on how he couched the meaning of "yes" or "no" or "misspoke" or "support" or "oppose", he might not have meant anything he said.

To whom do you think G.Q. Politician was speaking? If you didn't come away from his presser with a clear understanding of what he said, can you really say he spoke to you? Who was his intended audience if not you? The assembled reporters? His campaign donors? The other members of Congress? Maybe he wasn't really speaking to anyone at all. Maybe he gave the press conference so his communications office could put out a press release announcing his press conference, complete with the least-obscured lines that might show up in a newspaper article the next day.

Let's face it, folks, politicians are rotten communicators. They are taught, by their handlers nearly from the first time they run for office, to be vague and evasive so their opponents can't actually pin them down on any particular issue. Most of them, by the time they get important enough to get on national television, have spent decades in politics, where they learned the bizarre jargon of the profession. They spend most of their day around people who speak that same language, so they think it's natural.

Then they try to speak to you and it seems as if they're speaking another language.

You, as an activist, don't have the luxury they do. You need to get your point across quickly, accurately, and with enough bang that it stirs people to action right away. Still, the same question we asked of our imaginary politician we can ask ourselves.

When you write a blog post, to whom do you write it? Do you have a specific person in mind before you click the "Publish" button? (tweetable)

If you don't, you should. More, you should have a good idea who that person is and tailor your post (or tweet or Facebook post or podcast episode or YouTube video) to that person. Kurt Vonnegut, who knew a thing or three about writing, laid down 8 tips for writing short stories. Several of those tips apply to writing for a blog as well, but the one that is most important is the seventh:

Write to please just one person. If you open a window and make love to the world, so to speak, your story will get pneumonia.(Tweetable)

Here are a few reasons his advice works.

1) Your writing will be more conversational. I tend to write like I talk. If I write as if I'm having a conversation with you (yes, you, right there!), my posts flow better and are much more understandable. I use less jargon, my sentences tend to be shorter (try reading a long sentence in one breath), and I use smaller words. My articles read less like boring speeches or academic papers and more like something you'd want to share with your friends. If you want your work shared more, write conversationally.

2) Your writing will be more accessible. Most of us don't hang around nothing but Mensa members and giant brains in vats. We spend our days with normal people, who are more likely to have read a Harry Potter novel than the latest 20-page economic paper from a highbrow think tank. In fact, most of us prefer to read a good potboiler novel than, say, the entire text of Obamacare. When you write, keep those people in mind. Write something those people would find easy to understand. You, like me, may be a political junkie but most people aren't. Find ways to boil the complicated issues down to essential simplicity and folks will flock to your blog. (tweetable)

3) Funny beats angry. I know it feels good to rail on the latest progressive outrage. Goodness knows the current administration has committed plenty of them over the past few years. You get angry when you read another story about Fast and Furious or Obamacare or Benghazi. So do I. Just remember, no one in the world wants to spend their time with someone who is always angry and too much anger blurs into a dull hum most people quickly ignore. (tweetable) You have to leaven your anger with humor. Find a funny graphic (or make one yourself) that gets your point across. Poke fun at the pretentious Mr. President, or the sullen Harry Reid. Mock the outrageous and imagine your reader laughing along with you. Then, when you do unleash your righteous anger, it'll have greater impact.

0
01/17/2014
What You Need to Know About Pictures and Blog Posts, Part II
"https:\/\/www.freedomworks.org\/content\/what-you-need-know-about-pictures-and-blog-posts-part-ii?social=facebook_share"
null
https://fw-d7-freedomworks-org.s3.amazonaws.com/styles/thumbnail/s3/te_social_media_share/fw_default_0.jpg?itok=35IWEBMb
Blog

0
08/28/2013
How to Create Your Own "Sharknado" Social Media Storm
"https:\/\/www.freedomworks.org\/content\/how-create-your-own-sharknado-social-media-storm?social=facebook_share"
null
https://fw-d7-freedomworks-org.s3.amazonaws.com/styles/thumbnail/s3/te_social_media_share/fw_default_0.jpg?itok=35IWEBMb
Blog

How to Create Your Own "Sharknado" Social Media Storm

If you spent any time on Twitter last week, you heard about a movie called Sharknado, a low-budget affair made for the SyFy Network.

Four Things I've Learned From Being a Bad Blogger

When I started my blog, The Suburban Sundries Shack*, on blogger back in 2004**, there weren't a lot of "how to blog" guides floating around on the internet.