Yesterday, Garfield Reynolds and Wes Goodman of Bloomberg.com reported that by the year 2012 America will owe more money to foreign nations than it produces in annual economic output.  As their "Chart of the Day" illustrates, within the next 2 years America's national debt will surpass its gross domestic product (GDP): 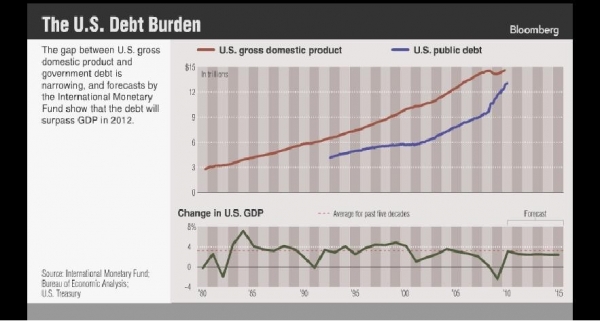 This surge in debt is due in part to the massive increase in government spending that has occurred over the past ten years.  According to the Heritage Foundation's "Spending by the Numbers," since 2000, almost every aspect of federal spending has increased dramatically.  Spending on entitlement programs has increased to 14 percent of GDP, an unprecedented level.  Massive hikes in defense and domestic spending have caused discretionary spending to grow at a rate that is 79 percent faster than inflation.  And other areas of federal spending have increased even more rapidly:

...anti-poverty programs (89 percent faster than inflation), K–12 education (219 percent), veterans spending (107 percent), and Medicare (81 percent).  And despite all the pressing national priorities, lawmakers approved over 9,000 earmarks last year at a cost of $16.5 billion.

While some of this spending is a temporary result of the recession, President Obama’s latest budget would replace this temporary spending with permanent new programs. Consequently, by 2020—a time of assumed peace and prosperity—Washington would still spend nearly $36,000 per household, compared to $25,000 per household before this recession (adjusted for inflation).

These "spend now/pay later" policies have left America with an estimated $1.5 trillion deficit for 2009.  That means that the federal government is spending $12,664 more per American household than it actually has.  Deficits normally rise during times of recession but typically they return to their pre-recession range once the economy has recovered.  However, instead of dropping back down to the $100 billion to $400 billion range that America saw before the recession, President Obama’s budget shows annual budget deficits averaging close to $1 trillion for the 10 years.  His Administration's borrowing will double the national debt which is set to reach $13.2 trillion by the end of this year and will soar to an astounding $21.4 trillion in 2020.

Fortunately, there are some measures that can be taken to cut back on spending and bring fiscal responsibility back to America.  Here are just a few wasteful areas that the Heritage Foundation suggested be addressed:

Think these examples are bad?  Heritage's entire list of cuts that the federal government should make to reduce waste and address the budget deficit can be seen here and they only get worse.