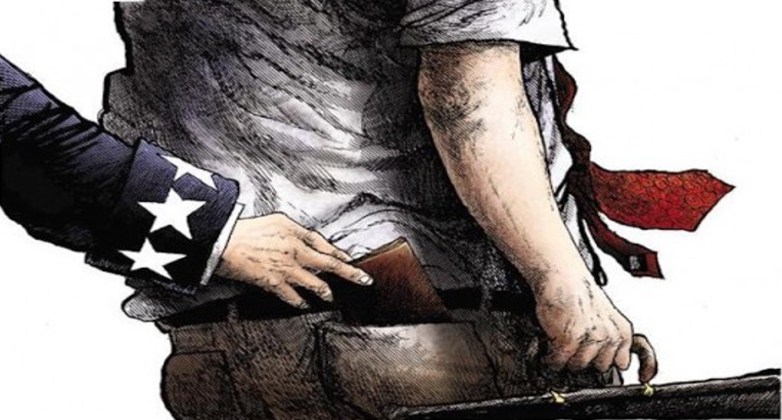 The Bank Secrecy Act requires financial institutions to report cash deposits or withdrawals of $10,000 or more. Frequent deposits or withdrawals under the $10,000 threshold can trigger suspicion that the account holder is structuring transactions to avoid the reporting requirements. In certain instances, this would result in the seizure of the bank account by the IRS.

Although the IRS and federal prosecutors defended the practice as a means to combat money laundering, the seizure of these bank accounts often impacted individuals who owned legitimate businesses and unwittingly violated federal law by committing a structuring offense. Individuals like Carole Hinders, Lyndon McLellan, Andrew Clyde, and Jeffrey Hirsch saw their livelihoods threatened when the IRS seized their bank accounts and threatened to permanently take possession of money through civil asset forfeiture.

A February 2015 review of IRS records by the Institute for Justice found that the powerful tax agency seized $242 million between 2005 and 2012. Structuring was the only offense in at least a third of these cases.

“Lax civil forfeiture standards enable the IRS to ‘seize first and ask questions later,’ taking money without serious investigation and forcing owners into a long and difficult legal battle to try to stop the forfeiture,” the Institute for Justice report explained. “Any money forfeited is then used to fund further law enforcement efforts, giving agencies like the IRS an incentive to seize.”

In April 2017, the Treasury Inspector General for Tax Administration (TIGTA) published a report on the seizures. According to the report, almost every seizure involved legitimately obtained money.

“When complaints were published in 2014 about seizures of property without sufficient evidence of a crime, TIGTA undertook this audit to determine how these seizures and forfeitures were conducted, what procedures the IRS used, and whether those procedures were fair,” the press release on the report explained. “TIGTA determined that 91 percent of the 278 investigations in its sample where source of funds could be determined were of businesses and individuals whose funds were obtained legally.”

Some individuals were able to win their cases, and others were forced into settlements by the IRS. Clyde, a gun store owner from Athens, Georgia, was one of those who settled. The IRS seized $950,000 from Clyde and managed to extort $50,000 from him in the settlement. Clyde, a veteran, called the settlement “a tactical retreat.”

With stories of innocent Americans being targeted by the IRS, in March 2015, then-Attorney General Eric Holder released a memo to put safeguards in place to ensure that innocent Americans weren’t negatively impacted by the IRS not pursuing action in instances where structuring is the sole offense. Additional criminal activity would have to be suspected to justify the seizure of a bank account.

“Appropriate use of asset forfeiture law allows the Justice Department to safeguard the integrity, security and stability of our nation’s financial system while protecting the civil liberties of all Americans,” said Holder in a press release announcing the change in policy. “And as we continue our comprehensive review of the Asset Forfeiture Program, we will stay focused on deterring criminal activity, assisting victims of wrongdoing and defending the rights of our citizens.”

Members of Congress blasted the seizures. In August 2015, a bipartisan group of members on the House Ways and Means Subcommittee on Oversight wrote to then-Treasury Secretary Jack Lew urging that he return the money to those from whom it was wrongly seized.

The House has also acted on legislation on three separate occasions to restrict the seizures of innocent Americans’ bank accounts. In September 2016, the House passed the Restraining Excessive Seizure of Property through the Exploitation of Civil Asset Forfeiture Tools (RESPECT) Act, H.R. 5523, without any opposition. The RESPECT Act, H.R. 1843, passed again in September 2017 by voice vote. The text of the RESPECT Act was included in the Taxpayer First Act, H.R. 5444, which passed the House unanimously in April of this year. The Senate has not considered legislation related to forfeiture.

The IRS has sought to address instances in which money was inappropriately seized and review petitions from claimants seeking to get their money back. According to the Washington Post, “The IRS reviewed 208 of those petitions and granted 84 percent of them. It referred the remaining 256 cases to the Department of Justice because of how the forfeitures had initially been processed, recommending that the DOJ grant 76 percent of them.”

The DOJ is ignoring the petitions, and Republicans on the House Ways and Means Committee are demanding to know why. Chairman Kevin Brady (R-Texas), Peter Roskam (R-Ill.), and Lynn Jenkins (R-Kan.) led a letter to Attorney General Jeff Sessions, who is a proponent of legalized theft of people’s property by the government.

“[T]he IRS and DOJ have broad discretion to grant petitions for mitigation in circumstances where the violation is minimal, a standard that the IRS used to grant the majority of its petitions for mitigation. There is nothing that prevents DOJ from returning these funds in cases that are not a part of larger criminal schemes,” the letter states. “And yet, DOJ has elected not to do so.”

“The Members of this Committee are profoundly troubled by the significant discrepancy between the IRS’s recommended outcomes and DOJ’s final decisions. While some may argue legal technicalities justify the overwhelming denial of these petitions, we strongly urge DOJ to take a step back and reassess the facts and circumstances surrounding these cases. What was done was not fair, just, or right in most cases. The IRS’s actions led to the destruction of many lives and small businesses, some of which will never fully recover. As TIGTA noted, individuals were often not fully made aware of their rights during these seizures. They felt pressured, scared, and alone,” the letter added.

The only Republican members of the committee not to sign the letter were Reps. Dave Reichert (R-Wash.), Tom Rice (R-S.C.), and George Holding (R-N.C.). Not signing the letter doesn’t necessarily mean that the member disagreed with its content. Rep. Holding, for example, has been critical of the IRS’s abuse of forfeiture.

Attorney General Sessions has some explaining to do, but the only real way to address the problem with federal forfeiture laws is to pass legislation. The House has done its job. The Senate, however, hasn’t, and it doesn’t look like it will anytime soon.