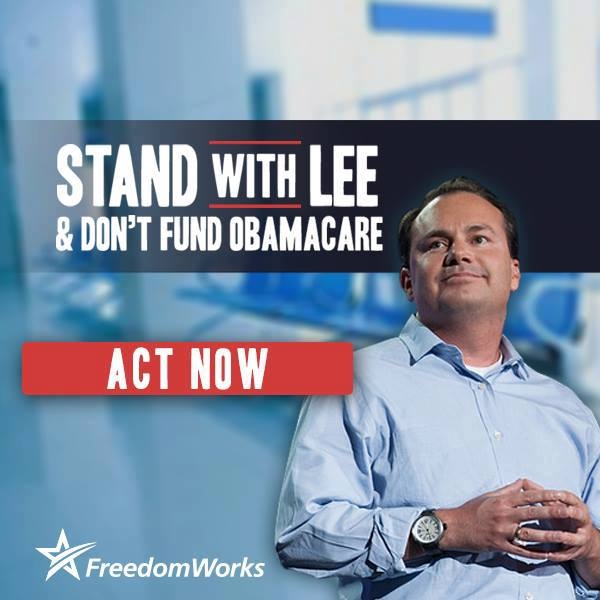 We know that without a simple House vote, the federal government cannot spend a dime.

Or rather, we know that it should not be able to spend that dime. Congress has over the years put more and more spending on autopilot, so that it doesn't have to vote to reauthorize the the so-called mandatory spending. That spending includes the Obamacare subsidies. That's a key problem we face, making our job more difficult, but no less possible.

We should use the need to keep the government running by passing a Continuing Resolution funding the entire government, except for Obamacare. If Congress explicitly removes all funds for its implementation and subsidies, this would amount to a one-year defunding and consequently a delay of the program.

Some want only a delay strategy instead. Under their plan, the House would pass a bill delaying the individual mandate for a year. Under the delay strategy, the entire government would be funded, including all of Obamacare, with all of its subsidies and media blitz. They rely on the warm camaraderie of Senate Democrats and the cooperative nature of President Obama to delay the mandate.

As Media Trackers Sean Davis put it on Twitter,

The establishment likes the delay strategy b/c it has no teeth. It allows them to be against Obamacare w/o taking any real risks.

The individual mandate is actually toothless as well. It's unpopular, true enough, being an unconstitutional penalty for failing to engage in commerce. But it's tiny compared to the price of insurance, and apart from subtracting it from your refund, the IRS won't be making much effort to collect it.

Without the individual mandate, even more people would think the unpopular Obamacare had already been repealed.

The entire problem is caused by an uneducated public not liking a law but thinking there is something wrong with the word "defund."

To really change the politics we must change the culture. Representatives are just that, looking forward to their next election more than to the welfare of the next generation.

Until the culture is changed, however, we can't accept leaders who don't use the power we give them. If you want more like you in office, show what you can do when you get there..

The establishment and leftist operatives claim that leaders of the defund movement are only in it -- or mostly in it -- to raise money and to make a name for themselves. They claim that the effort can only end in disappointment, with the base deflated and dispirited but Obamacare fully funded.

The people playing up those fears are the ones dispiriting the base. We've played this game of kick the can over and over again. Our elected representatives simply capitulate, collect their salaries, accept their health insurances subsidies, and drink their cocktails.

This time, we want more. It's not even whether the leaders win or lose, it's whether -- and how -- they fight.
Tags GOTV, GOP, Defund ObamaCare
Log in or register to post comments.
Related Posts
""
"https:\/\/www.freedomworks.org\/content\/freedomworks-unveils-hispanic-grassroots-alliance?social=facebook_share"
""
https://fw-d7-freedomworks-org.s3.amazonaws.com/styles/thumbnail/s3/te_social_media_share/fw_default_0.jpg?itok=35IWEBMb
Blog