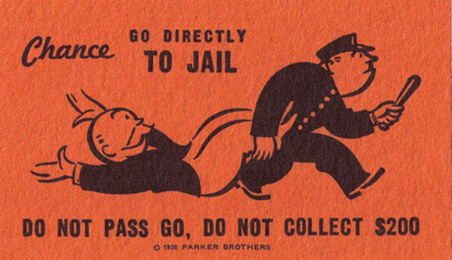 The premise of the book is "federal criminal laws have become dangerously disconnected from the English common law tradition" on which the American legal and justice system is based. This disconnect has created an atmosphere in which prosecutors can, theoretically, punish virtually anyone of crimes they have unwittingly committed, even if there was no intent to break the law.

A recent example of over-criminalization involves John Yates, a Florida fisherman. During an August 2007 offshore inspection of Yates' boat, Miss Katie, an agent with the Florida Fish and Wildlife Conservation Commission and the National Oceanic and Atmospheric Administration, measured Yates' catch of red grouper, finding that the length of 72 of the fish didn't meet the minimum 20-inch conservation regulation.

Yates was cited and told to put the undersized fish in a crate for seizure when he docked at port. But, upon inspection the following day, agents found only 69 fish. The remaining three of the fish in question were allegedly thrown overboard into the Gulf of Mexico.

Nearly three years later, in May 2010, Yates was indicted for destroying a "tangible object" under the "anti-shredding" provision of the Public Company Accounting Reform and Investor Protection Act, generally known as Sarbanes-Oxley, a cumbersome and controversial 2002 law passed as a reaction to the Enron scandal. The specific law he supposedly "broke" deals with the destruction of documents related to a federal investigation. He was convicted in August 2011 and sentenced to a 30-day jail term and three years of supervised release.

"I maintain that I committed no crime. I believe the agent originally measured my catch improperly and erratically," Yates wrote in an April 2014 op-ed at Politico. "Yet even if I had disposed of those three groupers, the federal penalty schedule indicates that I should have incurred a financial penalty beginning at $500 or a restriction on my fishing permit."

"As a result of the agency’s over-zealousness, I served my 30-day sentence and have lost my job as a boat captain for hire," he added.

Late last month, however, the Supreme Court, in a close decision, threw out the conviction. "Start with the nouns. Section 1519 [of Sarbanes-Oxley] refers to 'any record, document, or tangible object.' The noscitur a sociis canon instructs that when a statute contains a list, each word in that list presumptively has a 'similar' meaning," Justice Samuel Alito wrote in his concurrence. "A fish does not spring to mind—nor does an antelope, a colonial farmhouse, a hydrofoil, or an oil derrick. All are 'objects' that are 'tangible.' But who wouldn’t raise an eyebrow if a neighbor, when asked to identify something similar to a 'record' or 'document,' said 'crocodile'?"

Though she cast her vote to uphold Yates' conviction, Justice Elena Kagan, in her dissent, noted that this particular case "is unfortunately not an outlier, but an emblem of a deeper pathology in the federal criminal code."

Not only is this for those who've unwittingly broken the law and been subjected to heavy-handed sentences, it's also true for first-time, low-level nonviolent offenders who've engaged in some sort of illicit activity have been prosecuted and sentenced to prison terms that don't fit the crime for which they were convicted.

Indeed, whether we realize it or not, we're all criminals now. And this incredible notion should be cause for lawmakers to re-analyze and reform the justice system in innovative and effective ways that keep violent offenders off our streets and manage taxpayer dollars more efficiently.