What Can We Learn from Duck Dynasty? 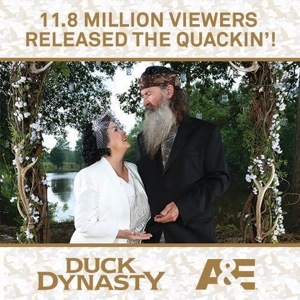 Last week, almost twelve million people tuned to the A&E channel for the fourth season premiere of Duck Dynasty, a record for a "non-fiction cable series". The show obliterated  records in nearly every demographic, including the greatly-coveted "target demo" of 18-49 year olds and drew nearly twice the audience of the old cable reality-show record.

The show's success is due almost entirely to the people who are the subjects of the show. America loves the Robertson clan and the folks who work with them at Duck Commander, their Louisiana business. The Robertsons are not Hollywood-polished, all blow-dried and Botoxed until shiny. A transcript of the show, with its mangled English and slang, would be to an English teacher what the Necronomicon is to the protagonist of a Lovecraft story.

Yet America loves them because they are real. They came by their success honestly, with hard work and constant application of "the redneck way." They enjoy each others' company. While many reality show families slowly fall apart season by season, theirs gets larger and more closely-knit. Willie, Si, and the gang live their faith in a way that's rarely seen in modern popular culture. In the entertainment world, they are exceptions, but America recognizes them as friends and neighbors.

Duck Dynasty is more than entertainment, though; it's useful to us. We can pick up the little life lessons we see during the show and apply them to the ventures at which we want to succeed. Here are three Duck Dynasty quotes you might find particularly useful.

1) "When in doubt, figure it out…that's the redneck way." -- Willie Robertson

No one knows everything, not even the legendary smarty-pants who works in the Oval Office. Life is full of unknowns (remember this post?) -- circumstances you've never encountered, challenges you've never met before, and obstacles both strange and daunting. How do you handle them? You can panic, freeze up, or figure it out the best way you can. The redneck way, the way the Robertsons used to build a successful business, an entertaining television show, and so much love that folks want Willie to run for Congress, is the third way. Be like Willie. Figure it out. Your solution won't be perfect but it'll work. That's a win. (tweetable)

2) "America, everybody is in too big a rush. Lay back, take a sip of tea, mow a little grass. Then if you get tired, take a nap." -- Si Robertson

Look at your schedule right now. Go ahead. Take it out and look at how fully you've packed your life full of things that must be done. Did you build any time into that schedule for relaxation? For friends? For fellowship? For a nice glass of cold, sweet tea and a cat nap? No? You should. Your brain and, yes, your soul, needs time to breathe and relax. The world and all its demands will still be there when you've refreshed yourself. Take a few minutes and grab that little mental health break. You'll be better off for it. Trust Uncle Si.

Godwin is my favorite character on the show because I can always count on him to keep the show from getting too serious. When the employees went on strike against Willie's decision that everyone should wear uniforms, Godwin blew up the tension on the picket line with a plea for lunch ("LUNCH!") How could you turn inward and stew on your own problems with someone like Godwin around? You couldn't, and that makes him very valuable. If you don't have a Godwin handy, though, you can create one in your own head. Remember that few situations in life are so serious that you can't laugh at them. Find your inner Godwin, that goofy part of you that yells "HAM SAMMICH" in a picket line, and smile. Then go get a ham sammich, or get a Miss Kay of your own to make you one.

America loves Duck Dynasty because the folks they see on the show every week are authentic. Si, Willie, Jase, Mountain Man, and Godwin are certainly not perfect, but they are real. The folks you want to reach want to see the real you as well. Give them what they want...and be happy, happy, happy.

Tags Pop culture, new media, Duck Dynasty
Log in or register to post comments.
Related Posts
"Orwellian Oregon Wants To Define What A Journalist Is"
"https:\/\/www.freedomworks.org\/content\/orwellian-oregon-wants-define-what-journalist?social=facebook_share"
"Once again, we're debating who is a real journalist, and who is not. The result of this determination could have much greater impact than anyone realizes."
https://fw-d7-freedomworks-org.s3.amazonaws.com/styles/thumbnail/s3/field/image/type%20writer%20keys.jpg?itok=rlMOejOF
Blog

0
01/17/2014
How Can You Benefit from FreedomWorks University? Find Out!
"https:\/\/www.freedomworks.org\/content\/how-can-you-benefit-freedomworks-university-find-out?social=facebook_share"
null
https://fw-d7-freedomworks-org.s3.amazonaws.com/styles/thumbnail/s3/te_social_media_share/fw_default_0.jpg?itok=35IWEBMb
Blog

How to Make Tweetable Links to Share Your Best Work

The most interesting challenge for any content creator is how to make what you create as easy to share as possible. People, and I include myself in this, are lazy and most social media platforms have fed this. New-style retweets, reblog buttons, and one-click share options abound, which has gotten us used to sharing content with only a click or two.