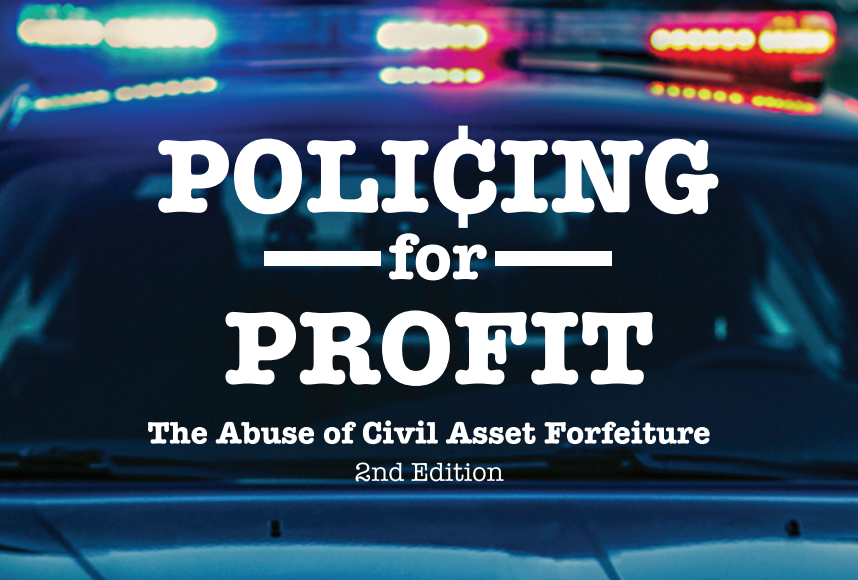 The Institute for Justice, a libertarian public-interest law firm, has released an update of its groundbreaking 2010 report, Policing for Profit: The Abuse of Civil Asset Forfeiture. The report offers a detailed look at state civil asset forfeiture laws and grades them based on the standard of evidence prosecutors need to subject property and cash to forfeiture, whether the burden of proof falls on the government or the property owner, and the percentage of funds law enforcement received from forfeited property.

There was significant movement on civil asset forfeiture reform in several state legislatures in 2015. In April, New Mexico passed a forfeiture reform law that is considered to be the gold standard. It requires a criminal conviction, or "proof beyond a reasonable doubt," before property suspected of connection to a crime can be subject to forfeiture and closes the loophole through which state and local law enforcement working in coordination with federal agencies can use federal forfeiture laws, which require much lower standard of proof and put the burden of proof on the property owner, who may never be charged with a crime.

Montana, in May, enacted similar legislation requiring a criminal conviction, though the state did not address the loophole, and the Michigan Legislature recently passed a package of seven forfeiture reform bills designed to protect innocent property owners. The package was signed into law by Gov. Rick Snyder (R-Mich.) just last month.

Other state legislatures have attempted to move on forfeiture reform but have met resistance. The forfeiture reform bill that passed the Wyoming Legislature in February was vetoed by Gov. Matt Mead (R-Wyo.), though lawmakers will try again in the 2016 session. Similarly, an effort to address the federal loophole in California died because of a misinformation campaign organized by state and local law enforcement and forfeiture reform in Pennsylvania has been moving at a very slow pace.

With reform on the minds of lawmakers across the country, the Institute for Justice's report, Policing for Profit, is a comprehensive guide to state forfeiture laws, which, unfortunately, often undermine the Fifth Amendment's guarantee of due process. The report shows that most states do not have meaningful protections in place to ensure that innocent people are not adversely affected by arbitrary seizures of their property.

Thirty-one states and the federal government require the government to show only "a preponderance of the evidence," an incredibly low standard, and 35 states, in perversions of justice, place the burden of proof on the property owner, who, again, may never be charged with a crime. The vast majority of states incentivize law enforcement to seize property by allowing agencies to keep some or all of the proceeds from forfeitures.

"The widespread failure of civil forfeiture laws to protect property owners from unjust forfeitures—or to provide the barest essentials of transparency regarding law enforcement’s forfeiture activity or spending—makes plain the pressing need for reform," the report explains. "The cost and difficulty of navigating a complex legal process to fight a forfeiture, plus the often low values of property seized, deter many from seeking their day in court. But making it to court unlocks a whole new set of challenges: Low legal standards of proof prevail throughout the country, with fewer than a dozen states requiring law enforcement to meet anything approaching the standard required in criminal proceedings."

"Indeed, federal and most state civil forfeiture laws merely require the government to show that property is slightly more likely than not related to a criminal violation—a far cry from proof beyond a reasonable doubt," it adds.

Reflecting the passage of its protective forfeiture reform law, New Mexico led the way with an A-, followed by Indiana, Maine, Missouri, and North Carolina. Several states -- including Georgia, Florida, Massachusetts, Oklahoma, Pennsylvania, and Virginia -- received grades of D+ or lower. The federal government received a D- for its forfeiture laws.

For federal and state lawmakers interested in forfeiture reform, the Institute for Justice recommends requiring a criminal conviction to subject property to forfeiture. Since, however, this may not be hard sell in some states, they do offer some reasonable alternatives, including eliminating the profit incentive that encourages abuse of forfeiture laws, raising the standard of proof, and enacting stringent reporting requirements.

"Taken together, such reforms would contribute significantly to protecting one of the most important rights enshrined in the Constitution," the report notes. "Elected representatives who take an oath to protect and defend the state and federal constitutions could do no better."