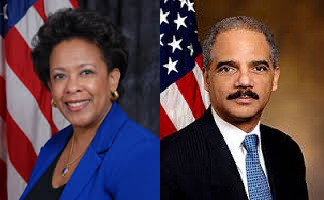 After Eric Holder announced his resignation from Attorney General for the Obama administration, the President announced his nominee to replace him, Loretta Lynch. Ms. Lynch has experience as the chief federal prosecutor in Brooklyn, NY, and has a largely apolitical track record, leading experts to believe Lynch should have no issue securing Senate confirmation.

That should not exclude Lynch from experiencing a thorough vetting process. Attorney General is the head of the Department of Justice, one of the most powerful positions inside the executive branch. Whoever the AG is has grand authority over which criminals to prosecute and enormous clout in addressing criminal justice policy issues. The Senate should be fair, but stern in ensuring she is fit for the influential position. A few areas of concern should especially be investigated by questioning.

From the Wall Street Journal:

“As a prosecutor Ms. Lynch has also been aggressive in pursuing civil asset forfeiture, which has become a form of policing for profit. She recently announced that her office had collected more than $904 million in criminal and civil actions in fiscal 2013, according to the Brooklyn Daily Eagle.”

We have covered the practice of civil asset forfeiture in the past. Civil forfeiture laws allow police departments to seize private property, sell it, and use the proceeds to fund their operations. The real owners of seized property do not have to be convicted or even charged with a crime to lose their property. Government can seize property, such as a car, a home, or even cash if it’s found to “facilitate” a crime.

As people are becoming aware of asset forfeiture activity, and bipartisan opposition to the practice grows, the Senate should definitely have Ms. Lynch clarify her stance on the policy and her larger philosophy on how much authority law enforcement should have dealing with citizens.

Where Holder and Lynch Agree

Past comments and actions made by Lynch can be indicative toward how similar of an Attorney General she will be compared to Mr. Holder.

As Lynch has been a member of Holder’s Advisory Committee of U.S. Attorneys, Lynch should be questioned on whether she directly advised Holder on his worst decisions, such as failing to enforce the contempt citation against Lois Lerner amidst the IRS-scandal, and putting guns in the hands of Mexican drug cartels under Operation Fast and Furious. Lynch should inform the Senate on the extent of her involvement, and opinions on the reasonability of these highly questionable policies.

Lynch seems to be in lock step with Holder on voter ID laws. Holder has aggressively targeted states with stronger voter ID laws, and Lynch has said that federal lawsuits to block voter ID laws “will continue.” Said Lynch:

“I'm proud to tell you that the Department of Justice has looked at these laws, and looked at what's happening in the Deep South and in my home state of North Carolina, [and] has brought lawsuits against those voting rights changes that seek to limit our ability to stand up and exercise our rights as citizens.”

The irony is she gave this speech behind a portrait of Nelson Mandela, who supported strict voter ID laws in South Africa, and President Obama himself praised a program in Kenya that ensured ID cards for youth so they could vote. Nonetheless, the Senate should request Ms. Lynch clarify her stance.

Finally, the Senate needs to question Lynch on how she views Holder’s action, or lack thereof, on banks responsible for what Holder called “the worst financial crisis since the Great Depression.” While both Holder and Lynch claim the federal government has been and will continue to be vigilant against the incriminating bankers, the lack of criminal charges brought forward needs to be addressed. The Senate needs to be responsible in confirmation hearings on Loretta Lynch to get her statements on current federal law enforcement questions and executive branch authority out in the open.