Where is the Youth Vote Going?

With Election Day just a little over a month away, partisan bickering is at an all-time high, along with unemployment, inflation, class warfare and our unsustainable debt. Just four years ago, Obama won the race for the White House with a great deal of help from the youth. College students came out in full swing on college campuses all across the country for Obama as they thought he would reduce the debt and bring our troops home.

Fast forward to 2012 and the energy from “Hope and Change” has faded away as young people have become apathetic to both Barack Obama and Mitt Romney.

The mainstream media is scrambling to find young people who voted for Obama in 2008 that are now voting for Romney and 2012 and it is a difficult task as young people are apathetic to both candidates. Romney hardly had a great deal of youth support to begin with but still had the opportunity of welcoming the Paul crowd to the GOP which included a large percentage of the youth vote but completely blew his chances with his treatment of the grassroots at the RNC. But where are the young people who are not entirely political up until election time? They are looking towards libertarianism. 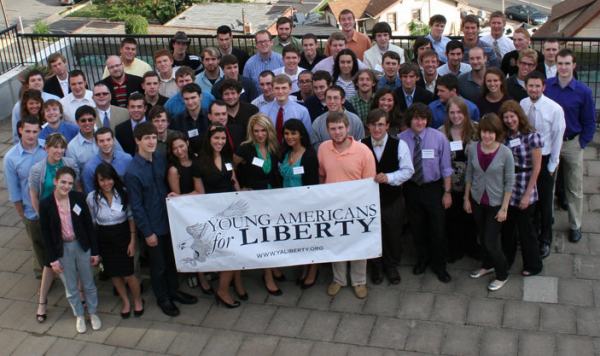 Many conservatives say that a vote for Gary Johnson is a vote for Obama, yet they don’t stop to think that it is Gary Johnson in fact, who may be stealing votes from Obama. Young people are sick of the endless wars, unsustainable debt, spiraling interest rates on student loans and a failing dollar. The youth also don’t want the government meddling in the affairs of individuals social lives either. This is an excellent opportunity for the GOP to change its messaging. This is not to say that the GOP should change its principles, but the way we portray our message and our party.

This is what the left has going for them, the media has helped them display Republicans as gay hating, racist, rich loving old white people, even though this is not the case. If we promoted, perhaps, “individual liberty” instead of making gay marriage a national issue, we could attract many young people to the party. Same with the immigration, Democrats own this issue. If we showed how immigrants have come here for economic freedom instead of government programs we would win a lot of youth voters. Now, all we talk about is how much they cost us in taxes and how we should deport them. This is not how we win the youth vote today, if Romney and the rest of the GOP are serious about winning in November, the GOP needs to take a step back on the trigger happy war front and start promoting individual liberty and economic freedom. This would certainly attract a great amount of youth voters who are currently disenfranchised from the system.

I'll be voting for Gary Johnson (http://garyjohnson2012.com). The GOP has betrayed lovers of liberty every time they have tricked them into voting against the Democrat. Each and every time, the GOP, just like it's spiritaul brothers in the Democratic party, vote for more and more and more and more government. Screw you guys, I'd rather have Obama, a more or less honest Socialist, than have you guys giving lip service to free markets and then voting for bailouts and other corporate welfare.

It is no doubt unnerving to think young adults are not paying attention to the destruction of their future, but I don't recall being interested much either. It wasn't untill I had some chips in the game before I realized how my life was effected by politicians. That being said, I make it a point to have conversations with the young folks in my circle, my son and daughter who are both young parents, and nieces and nephews and their friends, some still in school, some raising kids, and I do my best to get them thinking about what's happening that will shape their future. And I have to say most of them are reachable and are more engaged than we think. Maybe because if they are fortunate enough to even have a part time job and own a beater car, they can't afford gas to run it unless they move back home!
I admit that most of the kids I know around my home town go to work instead of college, so they have a little different view on the economy, but the point is that we can't shy away from explaining to the young kids in our lives the bad things we see coming for them because we are afraid they won't listen. They will. And if you want them to listen to the right message, don't count on their teachers and MTV to give it to them!

8 Ways Government is Waging a War Against Young People

ObamaCare: Coercing the Young to Finance Their Elders

Whenever he talks about the economy, Obama sounds like he's trying to explain to a professor why his term paper is late.

Kids these days.If they’re not playing World of Minecraft on a WiiTV, they’re blasting that crazy hippity hop “music” on their iSurface pads. Why that Bieber-Eyed Gagas band gives me a headache every time I dial up stations on my wireless. Would it kill them to play a traditional pop standard now and again? Now THAT was music!

On the weekend of February 15th-17th 2013, the up-and-coming activist group Students for Liberty hosted their 2013 International Students for Liberty Conference (ISFLC) in downtown Washington D.C. With over 1,200 attendees, the event was dedicated to students advancing liberty on college campuses nationwide. Featuring prominent liberty advocates including John Stossel and John Mackey, the weekend was filled with strategy sessions for young students looking to promote the cause of economic freedom at their respective universities.

In 2008, the under thirty crowd overwhelmingly voted for Barack Obama and in 2012 they doubled down on their allegiance to him, with over 60% of young voters choosing the incumbent president.