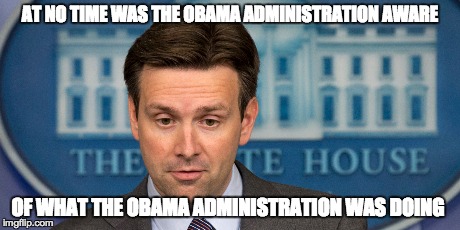 The White House isn't up to speed on the number of American households that will be forced to pay a punitive tax because they didn't have health insurance coverage last year.

During the White House press briefing on Tuesday, Press Secretary Josh Earnest was asked about the "millions of Americans who will be facing a looming tax bill" because of ObamaCare. Earnest quickly tried to downplay the negative tax implications of ObamaCare, suggesting that the reporter had his numbers wrong and repeating propaganda about the law.

"I don't think it's accurate to suggest that millions of people are going to get a tax bill as a result of this. The fact is millions of people all across the country have gotten a tax break that has made their health care more affordable, or their health insurance more affordable. That is the benefit of the Affordable Care Act," said Earnest. "The vast majority of Americans -- more than three-quarters of Americans -- are just going to have a box to check on their tax form to confirm that they've had health insurance."

The reporter again asked how the administration plans how to help the millions who will have to pay, but Earnest didn't try to spin it this time -- he suggested that the number doesn't exist. "I don't know what statistic you're citing when it comes to millions," Earnest replied. "I don't think that that's accurate, at all."

The thing is, it's entirely accurate. President Obama's own Treasury Department acknowledged last week that up to six million households will pay the tax, which, for 2014, is 1 percent of gross household income or $95, whichever amount is greater. Another headache is that many consumers who purchased coverage through the ObamaCare and received subsidies for which they weren't eligible may see a smaller tax refund or even owe Uncle Sam money.

Keep in mind that the Treasury Department's announcement was covered by prominent news outlets, including Wall Street Journal and The New York Times, not to mention that the controversial individual mandate is one of the centerpieces of ObamaCare. Additionally, the challenges that the subsidies will cause for many this tax filing season have been topics in the news and on Capitol Hill in the last several months.

So Earnest was either purposely trying to deceive reporters, which is, basically, the nature of his role in the White House, or he hasn't been keeping tabs on what the administration is doing, meaning that he isn't doing job. Either way, this is a clown show.