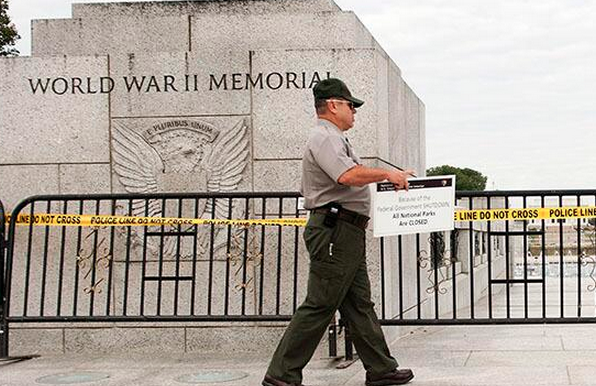 With the shutdown in full effect, national parks and monuments are closed. You can't go to Yellowstone, and tours of the Washington Monument have been suspended. However, one monument in particular has been singled out by the White House to be closed, barricaded and guarded to make a point and an extreme one at that.

One of the most emotional memorials in Washington is the relatively new World War II Memorial honoring the many Americans who lost their lives fighting the Nazis and Japanese insurgents in the 1940s. Groups of veterans travel on "honor flight," trips that fly them to DC to experience the memorial which honors their service.

I had the pleasure of sharing an airplane with an honor flight member last month on my way to DC. Forty-plus veterans, many in wheelchairs, came to our gate with full colors, a military band, and active members of the Army in their dress uniforms. 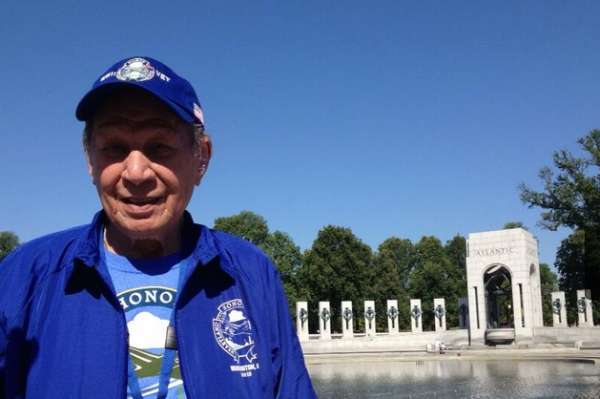 Both of my grandfathers served their country just after WWII: one on a submarine after graduating near the top of his class at Annapolis and the other as a Marine. WWII veterans and my grandparents have been called "The Greatest Generation" and undoubtedly have earned that title. They are the heroes that fought in Europe and the Pacific so we could have a world free of fascism. They are a generation who deserve respect. They are a generation that should not be used as pawns in the President's petty political games.

We are losing these great men each day, and letting them visit a memorial in their honor is the least we can do to thank them for their service. The White House clearly thinks otherwise.

As part of this week's overly-dramatized shutdown in Washington, DC, the open-air WWII Memorial, a monument that is left unstaffed most of the time, has been surrounded with barricades to keep out our heroic veterans. That's right, the Obama Administration has decided to block WWII veterans from paying their respects to their fallen comrades in order to make a political statement.

Let's be perfectly clear, it is a disgrace, an absolute disgrace that Barack Obama and his employees in the executive branch are making a concerted effort to restrict WWII heroes into an open-air memorial honoring their service, and the ultimate sacrifice their friends and fellow soldiers paid to keep this country free. This isn't a cavernous building needing hundreds of staff members to provide tours and upkeep. This is a memorial in the middle of the National Mall. In the open air. It has not had walls, doors, or fences. Until now.

Texas Senator Ted Cruz had this to say about the Obama Administration's abhorrent actions at the WWII Memorial:

President Obama is so fixated on forcing Obamacare on the American people that he’s even willing to deny World War II veterans the right to access the memorial they have earned through their heroic service.

This scenario encapsulates the bigger problem in Washington. President Obama is so set on imposing his destructive, far-left ideology that his government is literally barricading World War II veterans out of their memorial and blocking funding to the Department of Veterans Affairs.

And don't think this was some buried bureaucratic decision that no one had knowledge of in the White House. Nope, this one came from the top.

At the WWII Memorial, Carol Johnson w/the Park Service says they were told to close the site by White House's Office of Management & Budget.

There it is. The White House Office of Management & Budget ordered the closing of the WWII Memorial. Disgusting.

Park ranger "We were instructed to do this by OMB"

The White House even granted special furlough exemptions to allow park officials to come guard the WWII Memorial and block those trying to get in.

To illustrate the absurdity of this situation, let's compare it to another Obama scandal: Benghazi.

Washington Examiner's Charlie Spiering reports that at least seven officials were dispatched Wednesday morning to set up a ring of barricades to block tourists from the memorial. That is two more than the State Department had in Benghazi a year ago on the night of the terrorist attack that killed four, including the U.S. ambassador.

The lack of respect shown to America's veterans by Barack Obama's Administration is unparalleled. This is reprehensible and it is deliberate. This shows what extreme lengths this administration will go to in order to punish its political enemies, and it is shameful.