President Obama told small business owners at a campaign event in Roanoke, VA that someone other than themselves is responsible for their success. As it did with that one, the White House routinely posts the transcript each of President Obama's campaign speeches on its web site. The speeches are labeled as taking place at campaign events. That is the kind of abuse the Hatch Act was intended to prohibit.

As the Wall Street Journal notes, there is quite a bit of integration between the White House and the Obama campaign.

Boundaries get blurry.  Former White House people now work on the campaign; ex-campaign aides are in the White House.

Mr. Obama flies to electoral battlegrounds and gives official addresses. Or he stays in the White House and delivers what sound like campaign speeches.

Indeed, many have noted the permanent campaign strategy. As early as January, 2009, The Boston Globe reported that

Even before he takes office next week, Obama has made clear that he will continue some of the most controversial practices of Bill Clinton and George W. Bush, who routinely used political tools while in the White House to promote both their policy agendas and electoral fortunes.

As the reelection campaign season has begun to occupy virtually all of Mr. Obama's time and that of his staff, the lines blur even more.

Tapes have leaked from a frantic call made from Air Force One by President Barack Obama to campaign donors presumably just after visiting the devastating fires in Colorado. According to news reports, the president said, "The majority on this call maxed out to my campaign last time. I really need you to do the same this time." Apparently, a special phone on the government aircraft is dedicated to political calls that are paid for by the campaign.

Despite the fig leaves of using a separate phone line, reimbursing for the use of Air Force 1, or using separate campaign and administration briefers to reporters, it remains clear that the Obama White House and the Obama campaign are identical.

No rule of separation will ever be perfect. There is no way to stop people from thinking about their campaign activities on government time, or from mixing political messages with public policy decisions.

It does seem clear however, that the President's reelection campaign materials should not be hosted on the official White House web site. 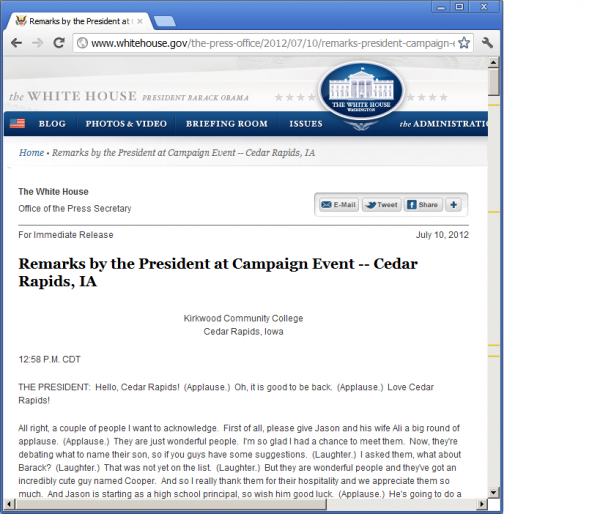 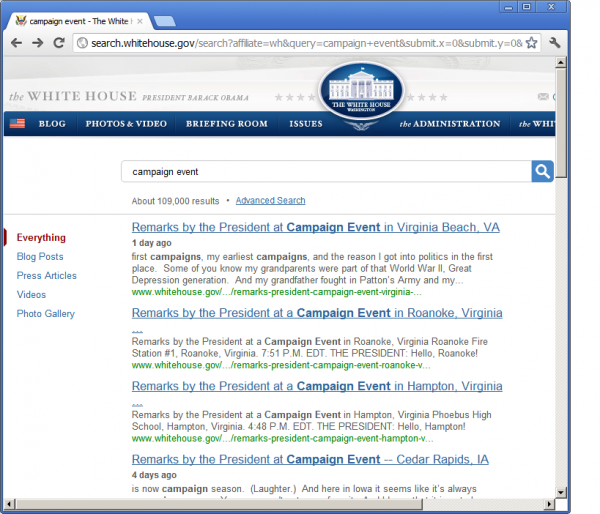