On Wednesday May 15, 2013, several dozen activists came to center city Philadelphia to protest the shareholders' meeting of Comcast at the Kimmel Center. The reasons varied from person to person. Most were upset that the CEO was a big supporter of Obama, but an even bigger reason was Comcast's ownership of MSNBC. 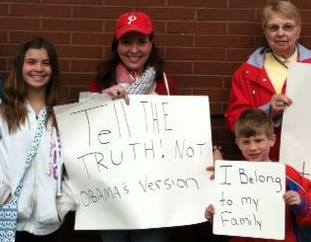 MSNBC has a long history of support for liberal ideology and against conservative causes. This summer, the news station even adopted the president's campaign slogan "Forward." Not only is it alarming that a news network would adopt a president's campaign slogan, but the term "forward" as a political slogan has known roots in communism. With political talking heads such as Rachel Maddow and The Ed Show, there is no question that the station is anything but balanced and leans heavily liberal.

What I found most appalling and especially creepy was Melissa Harris-Perry's Promo "Our Children Are Not Our Private Property." Recently, Melissa Harris-Perry said she would not back down. This was my final straw. I have three kids and they are not the property of the state. I was so glad when I learned that FreedomWorks was organizing a protest of Comcast. I brought two of my children down to the protest with a sign that read "I belong to my family."

As a movement we are getting attacked from all sides. We must not give up. We must continue to call out the Administration, the IRS, the Justice Department, the Media, the use of drones, the Nanny Bloomberg, the wire tapping, Benghazi, any other government cover-ups, plus the out of control government spending. If we aren't forever vigilant, our civil liberties will be lost forever.

Oh boy. Here we go again with another claim of " Its the liberal media!" Well, I'm sorry, but some of the largest media conglomerates in the world are in fact owned by conservative CEOs and if one wants to go on and on about "Liberal media", well there's also a HUGE amount of conservative media, with some elements of it strictly conservative and often intentionally misleading and not even really news.

Obamacare SCOTUS Fever Has No Cure

The countdown has begun.The time of year normally reserved for excitement only among baseball fans and out of school students has an added political component that's unusual even for a presidential election year: a nation breathlessly awaiting a Supreme Court decision that could swing that election.

A University should be a place of light, of liberty, and of learning. ~ Benjamin Disraeli A disturbing trend is developing in our institutions of higher learning - a trend that evokes visions of George Orwell or the Soviet Politburo. There have been an alarming number of unexplained terminations of professors who have dared to challenge the orthodoxy of the left. The most recent examples occured at Oregon State University and UCLA within the past few weeks.

Solyndra is the latest in the long list of “green energy” companies that have failed after being artificially propped up by the Obama administration. The solar panel manufacturer that received more than $500 million in federal “stimulus” loans declared bankruptcy a couple weeks ago.

Selling Out to Solyndra

Every day in Washington D.C. is filled to the brim with sound bites delivered by our incompetent leaders, devoid of any facts or reason, but fit for media consumption. The Obama administration is no exception to this unfortunate, but ironclad, rule of politics. Take the predictable spiel about “green jobs,” for instance we always hear rosy scenarios of a growing green industry, flush with high-paying jobs.

General Electric is 'Winning the Future'

General Electric reported that its first-quarter earnings have increased by 77 percent compared to the fourth-quarter of 2010.  This comes as the New York Times reported that GE paid zilch on their taxes, while raking in over $14 billion in profits in 2010.  Even worse, GE actually received $3.2 billion in tax benefits.

Business Week does a great job of outlining GE's tax code shenanigans. In sum, the company has laid out big money to powerful DC lobbyists to take advantage of and keep various breaks and loopholes in the tax code.  This isn't anything new or particularly surprising, but it is a great example of what happens when you have a toxic combination of a long and complex tax code and rent-seeking corporations who have been able to carve out special treatment at the expense of individuals.