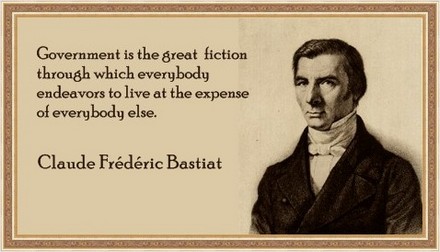 He explained the broken window fallacy.

Recently, President Obama's Council of Economic Advisers released their final assessment of the president's $780 billion stimulus package, the American Recovery and Reinvestment Act. Mandated by Congress, this year's report celebrates the fifth anniversary of ARRA. Not surprisingly, the CEA asserts that the spending program was an unqualified success, creating jobs and boosting the nation's output. Yet a closer examination of the report raises a number of questions, making it difficult to embrace the study's findings. Fundamentally, the administration is taking credit for improvements in the economy, without demonstrating that ARRA is the source of the benefits. While it is normal for administrations to take credit for economic growth, correlation does not equal causation.

One of the more bizarre statements in the report suggests that the administration carefully studied the works of Frederic Bastiat, the 19th-century French economist, drawing upon his famous "broken window" fallacy. Bastiat's parable examines the repercussions of a child breaking a shopkeeper's window. At first people view this as a good thing, because the broken window provides work for the local glazier, thus boosting economic activity. But this view is incorrect, for if the window had not been broken, the shopkeeper could have used his money for something else, without having to pay for a new window.

This is Bastiat's famous lesson on the seen versus the unseen when evaluating economic policy. While a cursory assessment may suggest that breaking windows is good economic policy because we see the work it provides for glaziers, a more thoughtful examination would reveal the unseen: the spending for new windows comes at the price of reduced spending elsewhere. In his example, the shoemaker loses a sale because the shopkeeper must forego buying a new pair of shoes in order to pay for the window. This important lesson about opportunity cost reveals that increased public spending comes at the price of diverting resources away from other uses that may have been more beneficial for economic growth.

But apparently the White House was aware of this danger, and carefully chose spending programs that will outperform private investments in promoting economic growth, thus avoiding the dangers of simply repairing windows. As the administration's report notes, "For this reason, the Recovery Act was designed not just to provide an immediate, short-term boost to the economy, but also to make investments that would enhance the economy's productivity and overall capacity even after the direct spending authorized by the Act has phased out."

As an example of this enlightened spending, the report touts the stimulus package investments in high speed rail. While a godsend to the high speed rail lobby, which has been fighting for years for their piece of the fisc, these investments are a puzzling example of prudent federal spending. As Ronald Utt notes in a survey of problematic global high speed rail projects, "Even in a strong economy, building HSR [high speed rail] makes little sense, offering minimal reductions in travel times at exorbitant costs. In the current weak economy and with the government facing massive budget deficits, the country simply cannot afford to squander $8 billion in stimulus funding, $5 billion over the next five years, and billions of dollars in matching state funding on a transportation system that will at best serve a minute fraction of the traveling public."

In fact, if the administration were a more serious student of Bastiat, his thoughts on public works and the broken window fallacy might have tempered their enthusiasm for spending. He wrote, "The sophism that I am attacking in this essay is all the more dangerous when applied to public works, since it serves to justify the most foolishly prodigal enterprises." High speed rail is a controversial use of tax dollars, and shovel-ready investments in the likes of Solyndra have done little to assure taxpayers that public funds are being used wisely. Getting further into the weeds, other projects funded under the law fail by even the CEA report's goal of boosting economic growth after the funding is gone. As James Freeman writes in the Wall Street Journal, there is little stimulus that can be found in a $783,000 study on why young people drink malt liquor and get high, or a $219,000 study on college hookups.

With persistent unemployment and muted economic growth, the administration's efforts to defend stimulus spending falls short. Today's economy is nothing to brag about; recovery remains anemic, but the federal debt has increased substantially. The stimulus package launched a flurry of spending that has consumers and taxpayers wary, because, unlike the administration, they are fretting the unseen consequences.