Using her campaign’s estimates, Warren had proposed $4.75 trillion in tax increases over ten years prior to rolling out the tax and revenue enhancement proposals to pay for Medicare for All. That $4.75 trillion — which represents the repeal of the Tax Cuts and Jobs Act, the 7 percent surtax on corporate profits, and the 2 percent and 3 percent net-wealth tax — doesn’t include other tax proposals that she has proposed, for which there aren’t estimates. (The revenue estimates in the graphic and elsewhere in this blog post are from Warren’s campaign. We have doubts that these proposals will bring in as much revenue as she claims.) 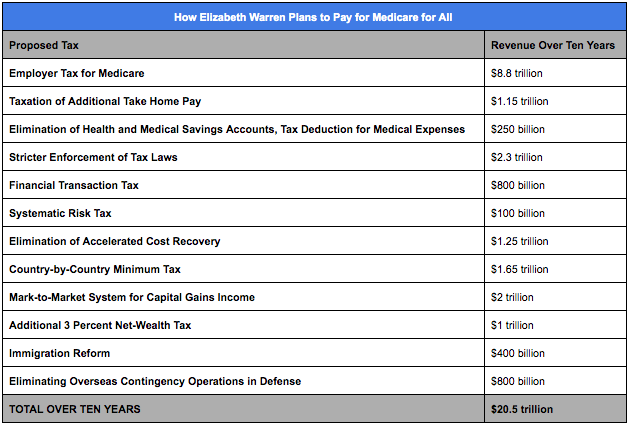 Obviously, this is a tax. Now, under current law, employers can deduct their contribution to employees’ health insurance. Under Warren’s plan, employers would pay a massive tax, estimated at $8.8 trillion over ten years, and wouldn’t be able to deduct the cost. If the revenues from the employer tax don’t meet estimates, another tax on businesses with high executive compensation and stock buybacks would kick in. The tax that employers will be required to pay will undoubtedly be passed on to employees. This means that middle-class workers will see their taxes go up, albeit indirectly.