The report assumes that federal regulation remains constant as well as that a host of economic and demographic variables – such as inflation, GDP, and immigration – occur within a likely range. Since GDP can help explain a country’s ability to pay back its debts, the CBO’s report evaluates federal debt as a percentage of GDP. For most of the report, the CBO assumes anemic 1.9 percent annual growth in real GDP.

Like last year, the driving force behind this massive budget imbalance is significant federal outlays – resulting primarily from the mandatory programs such as Social Security and Medicare – without a corresponding increase in government revenue. The report differs slightly from that of last year in that lower-than-expected interest rates in 2018 and 2019 mean that federal borrowing was not as expensive as was predicted and, therefore, the debt projection in 2019 was lowered, modestly. 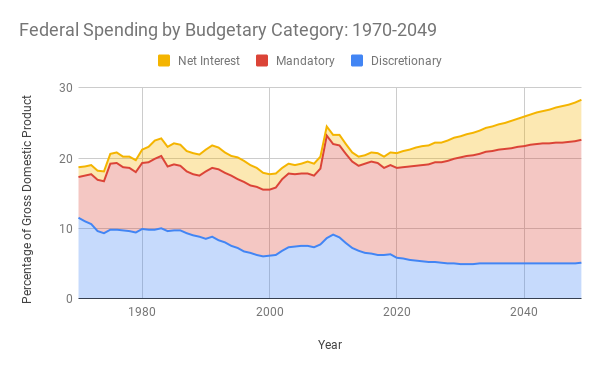 Regardless of short-term interest rates, however, the report makes it crystal clear: government spending is out of control and will get substantially worse if no serious changes to the budget are made. Although the CBO report expects that government revenues will increase slightly after the individual income tax and pass-through business tax reforms under the Tax Cuts and Jobs Act cuts expire in 2025, which the CBO assumes will not be made permanent, government spending is set to increase significantly relative to those revenues. 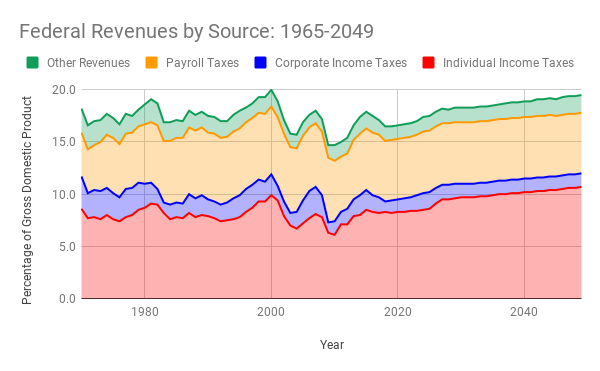 On balance, relatively longer life expectancies and lower birth rates mean that the American population is getting older and, correspondingly, Social Security and Medicare will be obligated to support more people. Current law regarding Social Security stipulates that benefits be paid to eligible dependents and dependents of disabled workers, as well as to survivors of deceased workers. In other words, Social Security will not only be tasked with caring for an aging population, but also for paying for the dependents of such a population. According to the CBO report, this will cause mandatory spending to increase faster than economic output, resulting in a primary budget deficit (deficits excluding net interest payments) equal to 3 percent of GDP in 2049.

Interest payments on federal debt already constitute a sizable portion of the budget in 2019, 1 percent of GDP. According to the CBO’s report, as interest rates begin to rise from their exceptionally low levels following the financial crisis, federal outlays for interest payments will increase more than fivefold relative to GDP, or 5.7 percent by 2049. Interest payments alone will account for “one-quarter of the increase in debt as a share of GDP over the next three decades.” Importantly, this means that in the future, the federal government will have to do more than simply maintain a budget surplus in order to square up with its debt; the budget surplus must also be large enough to allow the government to pay off the interest that it owes.

Additionally, due to high mandatory spending and large interest payments in the future, the CBO report predicts that discretionary spending will account for a lower overall percentage of GDP. That is, the government will have less freedom to decide where they can devote funding simply because of an overwhelming amount of debt obligation. 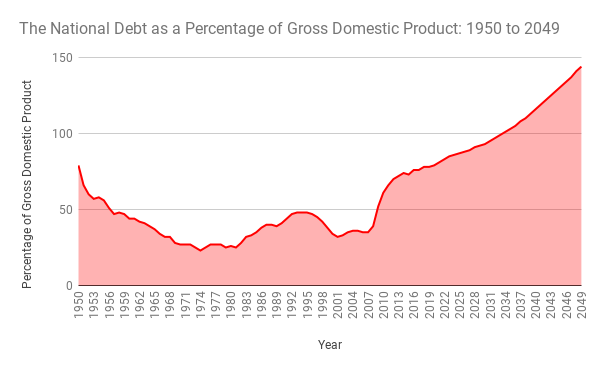 The time to act on the federal budget was yesterday. Our current debt path threatens to dampen economic growth and increase payments to foreign debt holders (which reduces income to US households). The debt also reduces the ability of our government to respond fiscally in times of crisis, military or economic. It’s also important on another point. As noted by FreedomWorks in June 2018, a debt that’s too large begins to create a “debt drag,” which actually reduces economic growth. An August 2010 working paper published by the World Bank made the case that the tipping point threshold for debt-to-GDP is 77 percent. “If debt is above this threshold,” the authors explained, “each additional percentage point of debt costs 0.017 percentage points of annual real growth.”

While the CBO’s Budget Outlook does account for “alternative scenarios,” in which either the government spends more or less than what is expected, the report does not consider the potential effects of proposed programs such as single-payer health insurance or the Green New Deal. These programs threaten to burden Americans with even more debt. Of course, the purpose of the CBO’s report is to extrapolate present legislation into the future. However, it should be noted that given the current and foreseeable dire state governmental debt, the introduction of such government programs would be ill-advised to say the least.

Politicians owe it to the American people not to wait around to see which straw breaks the camel’s back.