Last week, the CBO released the regular long-term budget outlook. This report provides 30 years worth of projections on the budget and economy based mostly on current law. Obviously, 30 years is a long time, so the projections come with a measure of uncertainty. Still, the report is alarming because of what it shows, which is an alarming growth of federal spending.

Between FY 1970 and FY 2019, which serves as a base 50-year historical comparison for our purposes, federal spending as a percentage of gross domestic product (GDP) averaged 20.4 percent while revenues averaged 17.4 percent. (GDP is the total value of goods and services produced in an economy.) The average budget deficit was 3 percent, which, although still too high, isn’t terrible.

Although federal revenues as a percentage of GDP are expected to grow, what comes into federal coffers won’t keep pace with federal spending. This is because of the growth of mandatory spending programs like Medicare, Medicaid, and Social Security. We call these programs “mandatory” because outlays are based on the number of beneficiaries and not appropriated by Congress. 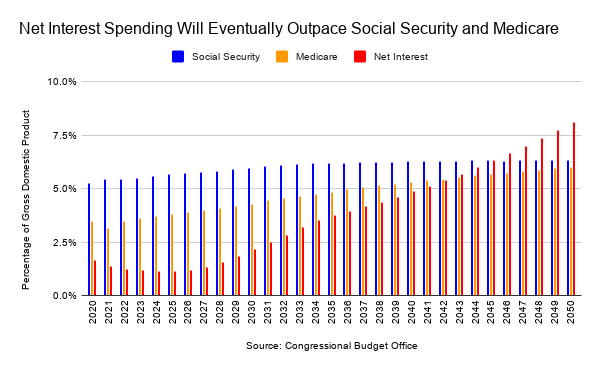 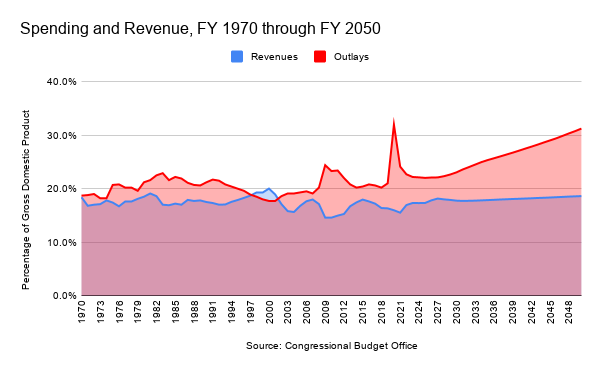 As a result of the growth of federal spending, budget deficits are expected to become larger. Taking FY 2020 out of the picture, because of the abnormal deficit caused by an increase in federal spending and lower revenue because of a recession caused by partial economic shutdowns across the country, the deficit is projected to hit 16 percent of GDP in FY 2020.

Typically, the federal government has run large deficits during recessions because of the prevailing Keynesian economic theory that government spending and temporary tax policy changes can boost aggregate demand in the economy and boost consumption. This hasn’t been limited to the stimulus package passed in 2009 during the first weeks of President Obama’s first term in office. President George W. Bush, to a lesser degree, also relied on stimulus measures to boost the economy, mostly through rebate checks. For our purposes, the largest budget deficit in the 50-year comparison window came in FY 2009 at the height of the Great Recession. The deficit as a percentage of GDP in FY 2009 was 9.8 percent.

Although the budget deficit will decline as the economy recovers from COVID-19, the decline is only temporary. We’ll also note that the deficit may actually be larger than the CBO projects if interest rates rise. Deficits have to be financed, which is done through the sale of securities by the Department of the Treasury, at a relatively low, albeit guaranteed, interest rate. The CBO anticipates low interest rates, but that could change because of structural long-term deficits. If investors begin to worry about the United States’ ability to meet its obligations, interest rates would rise.

Financing deficits can also have a broader negative impact. Because government borrowing to finance deficits can increase interest rates, it can discourage private investment. This can have the effect of reducing investment in the private-sector as fewer loanable dollars are available for businesses. 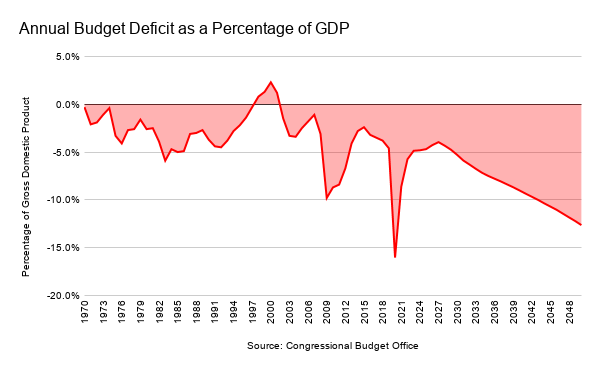 According to historical figures provided by the Office of Management and Budget (Table 7.1), the highest the share of the debt held by the public has reached compared to GDP is 118.9 percent in FY 1946, right after World War II ended. 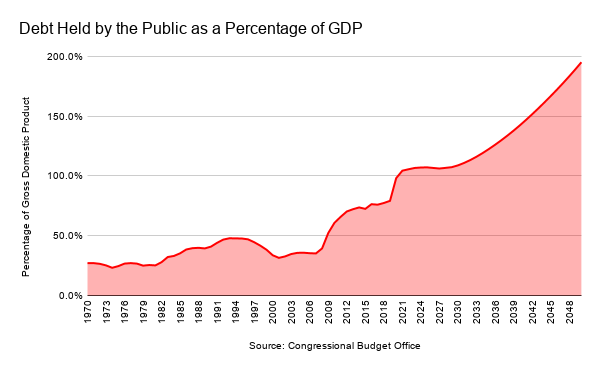 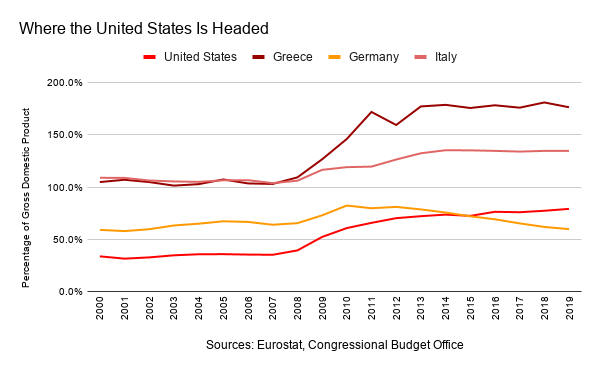 Again, the CBO’s projections are mostly based on current law. The perilous trajectory we’re on can be altered by Congress, but not without reforming entitlement programs. Getting a handle on entitlement programs by reforming them in a way that encourages economic growth will get a handle on structural budget deficits, lowering how much we expect to pay on net interest. Congress can also do this through legislation like the Maximizing America’s Prosperity Act, H.R. 3930 and S. 2245, which would cap noninterest spending as a percentage of potential GDP.

Doing nothing isn’t an option. America’s prosperity is at stake.