This year, FreedomWorks Foundation’s RACtivists submitted 2,074 comments in support of changes that eased the regulatory burden placed on schools by the National School Lunch and School Breakfast Programs. All together, RACtivist comments made up over 71 percent of all the comments submitted to the Food and Nutrition Service (FNS). 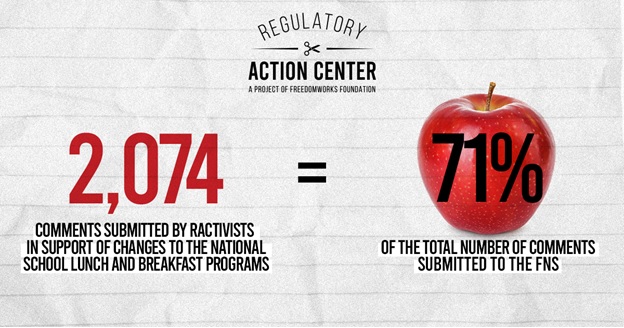 1) Biden’s Climate Agenda at a Glance

Since early on in the campaign, Biden and the Democrats have made it clear that climate change is going to be at the very top of the agenda. Based on his own statements, and reports released by his transition team, it appears very likely that a President Joe Biden will immediately take swift action upon inauguration. Among other things, Biden has already promised to rejoin the Paris Climate Agreement and reimpose the Clean Power Plan on day one in office. This agenda would be a radical frameshift for our national policy, resulting in higher energy costs for consumers nationwide.

Read about the expected “flurry of executive orders:” HERE

3) President Trump to Move Forward with Most Favored Nation Proposal

Following months of fierce debate and negotiation, it appears that the Trump administration is going to impose price controls on pharmaceuticals after all. Against fierce opposition from the industry, it appears that the Department of Health and Human Services will move forward with a final rule to implement their “most favored nation” proposal. This rule would force Medicare to buy pharmaceuticals at the same price as the lowest price among countries in the Organization for Economic Cooperation and Development (OECD). By indexing the price of pharmaceuticals to countries like the United Kingdom that have a single-payer healthcare system, the Trump administration will be taking us one step closer to socialized healthcare in America.

4) Pentagon to cut troop levels to 2,500 in Iraq, Afghanistan

This Tuesday, Acting Defense Secretary Christopher Miller announced that the Pentagon is planning to reduce troop levels from 4,500 to 2,500 in Afghanistan, and from about 3,000 to 2,500 in Iraq. This announcement is just the latest step by the Trump administration to fulfill their promise to end our endless wars in the Middle East. In spite of the criticism from hawks on both sides of the aisle, Trump’s national security adviser Robert O’Brien told reporters that “[by] May, it is President Trump’s hope that they will all come home safely and in their entirety.” Although future administrations could order troop levels to be increased, this final push to further accelerate the withdrawal of American troops from Iraq and Afghanistan is another step in the right direction.